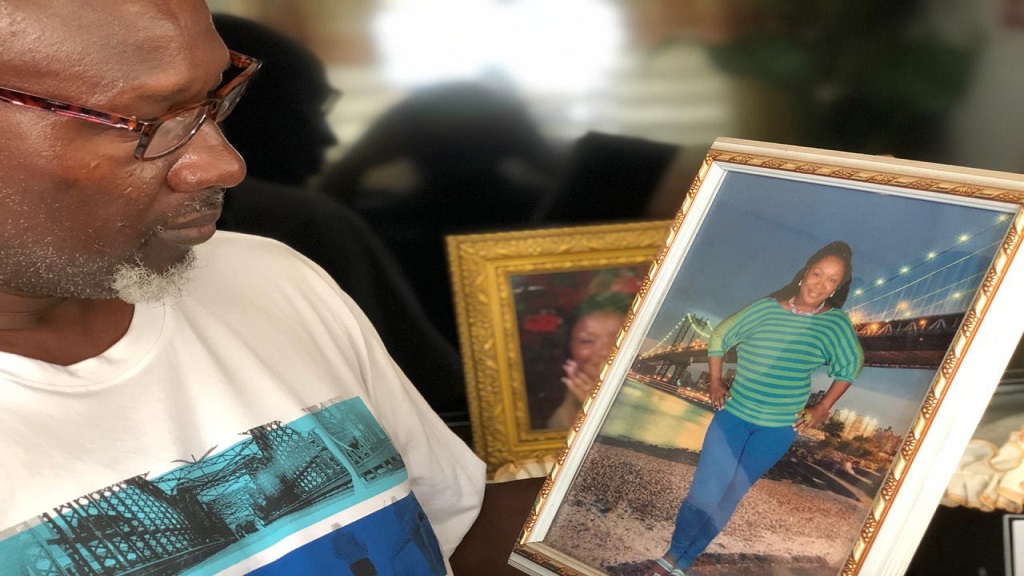 Dave Sinclair looking at a photo of his late wife, Carsha.

The South East Regional Health Authority (SERHA) has advised that it has launched an investigation into the circumstances surrounding the death of a patient at the National Chest Hospital in St Andrew on Tuesday, July 8, 2020.

The authority said a preliminary report from the probe has found that the medical team that was involved, provided all the necessary medical attention to the patient, and the applicable clinical management procedures had been followed.

It said the patient was admitted to the hospital for a known chronic respiratory illness.

In a release on Saturday, SERHA said as part of the Ministry of Health and Wellness’ surveillance protocol, all patients being admitted to public hospitals must be tested for coronavirus COVID-19, and as such, the patient in question was tested for the virus and a negative result was returned.

However, there have been suggestions that at the time of the incident, she was being kept in isolation at the hospital, and there has also been an indication that she may have died in an attempt to escape from the facility.

Without elaborating, SERHA said the management of the National Chest Hospital has been asked to examine the existing security protocols at the facility and, where necessary, to put in place appropriate measures for patients who may pose a risk to themselves.

The authority has also given an assurance that every effort will be made by its staff to preserve the lives of all who seek treatment and care at its institutions.

Forty-three-year-old Carsha Johnson Sinclair is believed to have fallen to her death in a chute at the National Chest Hospital last Wednesday morning, and her family is seeking clarity about what really happened.

It has been suggested that the woman, who was initially believed to have possibly been afflicted by the coronavirus (COVID-19), was trying to escape from the hospital, and fell into a ventilator chute, in which she died.

Her family said Sinclair was reportedly tested for COVID-19, but no result was presented to her or the family.

But now SERHA has said a negative result was returned in the case of her sample.

In an interview with Loop News on Thursday, her husband, Dave Sinclair, said the family is demanding answers from the hospital, and have retained a prominent attorney to represent its interests.

In the interview, Johnson said the family is insisting on the provision of CCTV footage to show what occurred that led to his wife’s death.

Sinclair said because of his wife’s medical challenges at the time, she could not walk for even a minute without being supplied with oxygen, and questioned how she supposedly walked for some distance and managed to climb upon a bin to go down into the ventilator chute.

Sinclair also said he has not been able to go to work since the incident, as since the news of his wife’s death broke, his boss has been of the view that he has been exposed to the C0VID-19 virus.

He said he won’t be able to go back to work until he gets a clean bill of health from medical authorities, and the situation has significantly affected his life.