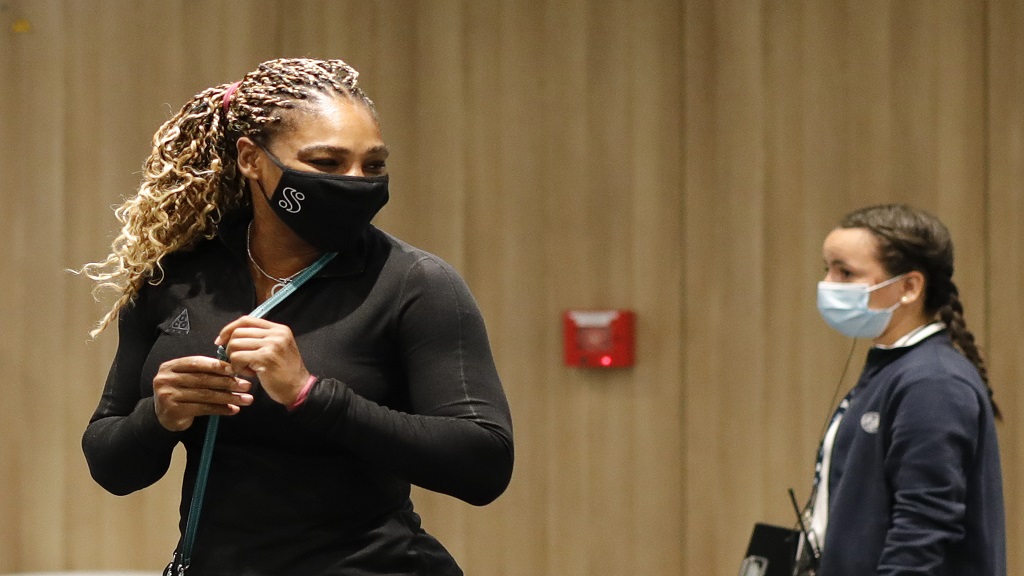 Serena Williams of the US, left, leaves after a press conference in which she announced her withdrawal from the tournament because of an Achilles injury prior to her second round match of the French Open tennis tournament at the Roland Garros stadium in Paris, France, Wednesday, Sept. 30, 2020. (AP Photo/Christophe Ena).

Serena Williams has withdrawn from the French Open ahead of her second-round tie against Tsvetana Pironkova with an Achilles injury.

However, the 39-year-old announced shortly before Wednesday's contest with Pironkova that she will play no further part at Roland Garros.

Williams stated that a lack of recovery time from the US Open, where she was beaten in the semi-finals by Victoria Azarenka a little over a fortnight ago, has influenced her decision.

"I love playing in Paris. I actually adore the clay. It's so, sort of, I don't know, fun for me," Williams said.

"I really want to give an effort here. It's my Achilles that didn't have enough time to properly heal after the [US] Open.

"I was able to get it somewhat better but [I was] just looking long-term at this tournament and [wondering], will I be able to get through enough matches?

"So, for me, I don't think I could and I'm struggling to walk, so that's kind of a tell-tale sign I should try to recover."

Williams is a three-time singles champion at Roland Garros, the last of which she won in 2015 by beating Lucie Safarova in the final.

She had defeated Pironkova in the quarter-finals at Flushing Meadows earlier this month, rebounding from losing the first set to progress in three.

The veteran insists her body is still able to cope with the demands of professional tennis despite the setback.

"I feel like my body is willing, I just literally…this is not a nagging injury, it's an acute injury, so if it was my knee it would be more devastating for me, but this is something that just happened and it's super acute," she added.

"I feel like my body is doing really well. I just ran into, for lack of a better word, bad timing and bad luck really in New York.

"It happened but my body is actually doing really, really well. I can never do too much sitting because I've been working for over 20-something years.

"I tried. I always give 100 per cent, everyone knows that, maybe more than 100 per cent if that's possible. I take solace in that.

"I think Achilles is really an injury you don't want to play with because that is not good if it gets worse. I think it's one of the worst, I don't want it to get to that point."

Serena Williams pulls out of Rome with Achilles injury

Short of No. 24 again, Serena Williams loses to Azarenka at US Open