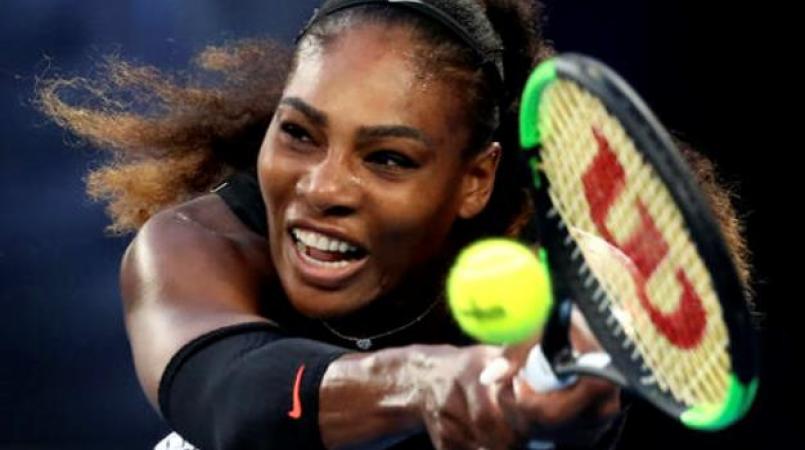 With her record seventh Australian title, the 35-year-old Williams moved ahead of Steffi Graf for the most major titles in the Open era. Margaret Court won 24 majors, but collected 13 of those before the Open era.

The victory at Rod Laver Arena also ensured Serena Williams will regain the top ranking, which she lost in September after 186 straight weeks when Angelique Kerber won the U.S. Open.

It was Serena's seventh win in nine all-Williams Grand Slam finals, and the first since Wimbledon in 2009. It was 36-year-old, No. 13-seeded Venus Williams' first trip back to a major final in 7 ½ years.

Williams has won 15 majors since last losing to Venus in a Grand Slam final, at Wimbledon in 2008.

Venus walked over to Serena's side of the net and the sisters hugged.

"This was a tough one — I really would like to take this moment to congratulate Venus," Serena Williams said. "She's an amazing person. There's no way I'd be at 23 without her. She's my inspiration and the only reason I'm standing here today. Thanks for inspiring me to be the best player I can be.

"She deserves a round of applause — she's made an amazing comeback."

The match didn't live up to its classic billing, with nerves and tension causing uncharacteristic mistakes and unforced errors and four consecutive service breaks before Venus finally held for a 3-2 lead. That included a game when Serena had game point but served back-to-back double-faults and three in all to give up the break.

There were six service breaks in all. Both players were relatively subdued, except for Serena's racket smashing spike on the court in the third game that earned her a code violation.

After making the three double-faults in the fourth game, however, the younger Williams didn't face another break point in the 1-hour, 22-minute match.

In terms of total years, it was the oldest Grand Slam women's final in the Open era with the Williams sisters combining for 71 years, 11 months.

Serena Williams now has a 17-11 career record against her sister, including a 10-5 advantage at Grand Slams.

Serena hadn't wanted to talk about the No. 23 before or during the tournament. She finally can now.

She tied Steffi Graf's mark of 22 Grand Slam singles titles in the Open era by winning Wimbledon last year. She missed her chance to break Graf's record with an upset semifinal loss at the U.S. Open — for the second year running — and hasn't wanted to talk about the number 23 since arriving in Australia.

Until this trip, Venus hadn't reached another major final since 2008. She didn't make the second week for a few years as she came to terms with an energy-sapping illness since being diagnosed with Sjogren's syndrome in 2011, and made her comeback to the semifinals at Wimbledon last year.