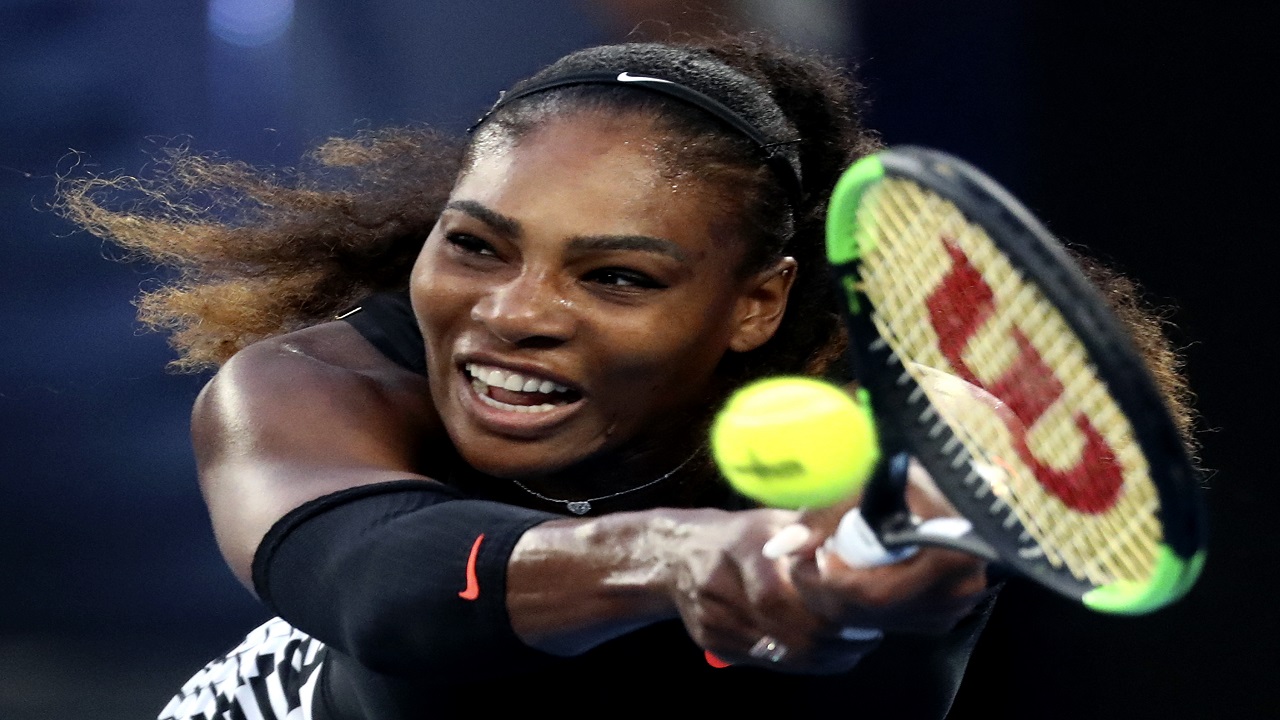 In this Jan. 28, 2017, file photo, Serena Williams makes a backhand return to her sister Venus during the women's singles final at the Australian Open tennis championships in Melbourne, Australia.

Williams won't be playing in either of Saturday's Fed Cup singles matches as she makes her comeback five months after becoming a mother. Williams teams up with Lauren Davis to face Lesley Kerkhove and Demi Schuurs of the Netherlands in Sunday's doubles match.

"It's definitely the start of a long process," Williams said. "Physically, I feel good. Every day, I get better and I get stronger. That's just something I always keep telling myself every day, I have to get better."

Williams, 36, hasn't played an official match since winning the 2017 Australian Open. Williams later revealed she was pregnant during that tournament.

Although Williams isn't scheduled to play any singles matches this weekend, that could change. U.S. captain Kathy Rinaldi has the right to change her Sunday lineup after Saturday's play.

"We'll wait and see how tomorrow goes and then we'll make our adjustments, if any," Rinaldi said Friday.

But this weekend's headline is the return of Serena Williams, who participated in a Dec. 30 exhibition match but otherwise hasn't played since that 2017 Australian Open.

Williams said Friday she's unsure about how she will manage her schedule and whether she will play all three remaining Grand Slam events this year. Williams' 23 Grand Slam singles titles put her one behind the record held by Margaret Court.

"I have long-term goals obviously, but right now my main goal is just to stay in the moment," Williams said. "It goes unsaid (that) 25 is obviously something that I would love, but I'd hate to limit myself."

"It's probably been the most fun of my life," she said. "It's a totally new experience. I love motherhood, and I look forward to just being the best mom I can be."

Williams said she has benefited from having her sister alongside her as she attempts this comeback.

"She's been really, really positive," Williams said. "There (are) moments that have just been hard, just getting back out there and doing it every day. You have to get used to that and get in the rhythm of that. I've been able to really rely on her for that."

Venus Williams has been impressed with her younger sister's parenting skills.

"I think she's the best mother I ever saw," Venus Williams said. "She's amazing. She does everything herself."

Venus Williams was asked how motherhood had changed her sister.

"She might go out a little less," Venus said before breaking into a grin. "But she's definitely remained just very youthful and childlike at heart. I think sometimes motherhood changes people in a way that they become less young and more serious, but that hasn't affected her."

Serena Williams acknowledged there have been "a lot of ups and downs" in her comeback as she mentioned "fighting against all odds to be out there and to be competing again."

She mentioned there are "moments that have just been hard, getting back out there doing it every day." Williams had told Vogue magazine that she developed several small blood clots in her lungs after her daughter was born.

Williams had opted against trying to defend her Australian Open title this year.

"I think she's smart to take her time and not to play Australia," ESPN analyst and 18-time Grand Slam singles champion Chris Evert said last week. "Playing Fed Cup and easing her way back with exhibitions. Maybe she wants to peak for Wimbledon, that would be her best chance at a Grand Slam."

Williams said the Fed Cup represents an ideal setting for her return. Not only does it allow her to practice alongside a few different players, it also enables her coach and teammates to offer different perspectives on her progress.

"It actually is a really perfect opportunity to try to come back," Williams said.