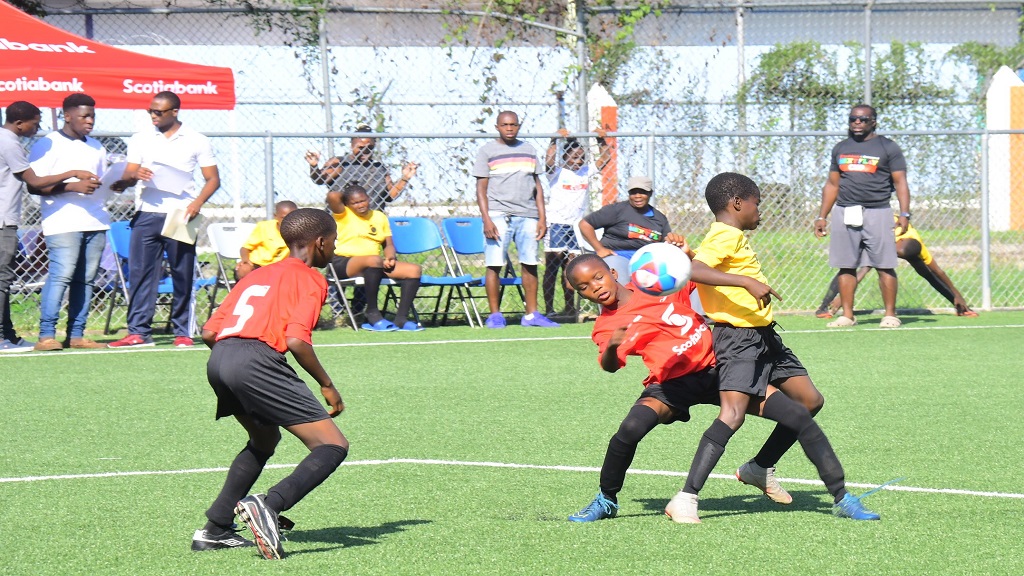 Reigning champions Holy Family Primary are among the unbeaten teams after week one of the Jamaican leg of the 2019 Scotiabank Concacaf NextPlay Cup.

The inaugural local champion got its campaign off to a winning start with a 3-0 victory over St Anne’s Primary. In their second match, Holy Family Primary were held to a 1-1 draw by Waterford Primary. They returned later in the day to blank Port Henderson Primary 2-0 and closed out the opening week with a goalless draw against Portsmouth Primary.

Waterford Primary were the only other team in the group to secure two victories on the day.

The Portmore-based school following a 1-1 draw against Clan Carthy Primary and a similar scoreline against Holy Family in the first two rounds roared back to beat St Benedict’s Primary 4-0 and Port Henderson Primary 5-2 in the other two rounds.

Rousseau Primary, which edged Portsmouth Primary 1-0 for third-place in 2018, are also unbeaten following week one.

The Kingston-based school, competing in Group 2 of Zone 1 (eastern section), ended the opening week with three victories and a draw from its four matches played on the day. Rousseau Primary started the day with a 2-0 victory over Maxfield Park Primary and then were held to a 1-1 draw by Hope Valley Experimental. In the other two matches on the day, Rousseau Primary recorded 1-0 victories over  St Peter Claver Primary and Red Hills Primary respectively.

Just before the competition started, children ages 10-11 had participated in an academy where they were taught the fundamentals of how to play the sport as well as social values and skills on their journey to become great human beings.

“At Scotiabank we believe in football” said a Scotiabank spokesperson in an official statement. “Football has the unique ability to connect people all over the world. We also believe in the power of football as a vehicle for social change. We are committed to helping the communities that we serve to become better off. For this reason, Scotiabank is proud to partner with Concacaf in staging the NextPlay Cup which engages youth across our region and gives them to the opportunity to not only learn football but also the important life skills that team sports imparts.”

Scotiabank Concacaf NextPlay Cup enters its second week on Saturday, November 29 before the quarter-finals, semi-finals and championship match on December 7.