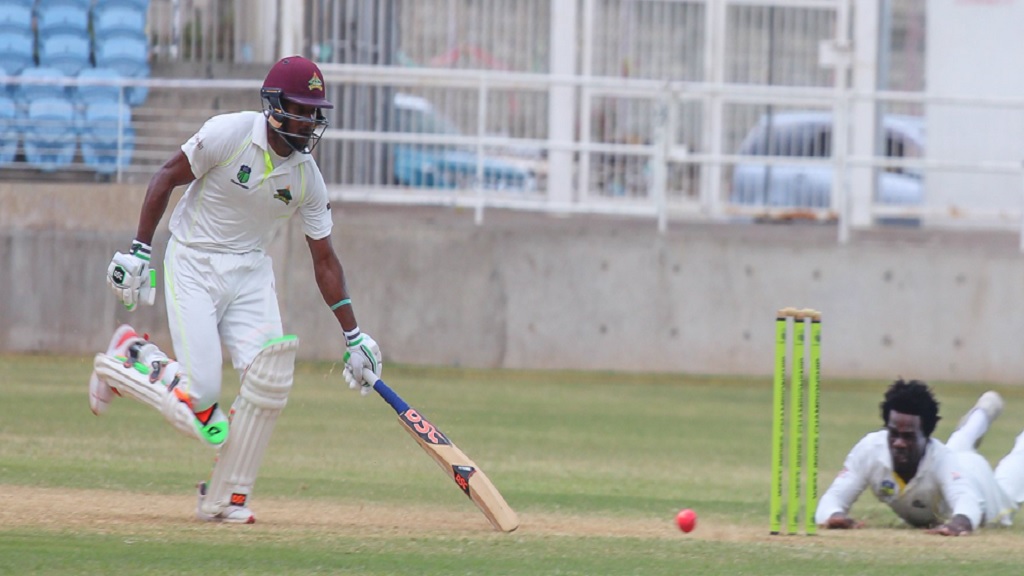 Jamaica Scorpions received another setback in the 2018-2019 West Indies four-day championships by suffering back-to-back defeats from two matches in the third round on Monday.

Edwards, the Volcanoes captain, and Hodge carried the fight for the visitors with a 99-run, fifth-wicket stand that squeezed the life out of the Scorpions’ attack. The Volcanoes, who resumed the day on 176-4 in pursuit of 287 for victory, replied with 289-5.

Edwards struck half-dozen fours and a single six in the top score of 76 from 192 balls and Hodge supported with 59 that included six fours from 119 balls to earn the Player-of-the-Match award, as the Volcanoes successfully completed their chase to earn their second straight victory of the season.

West Indies fast bowler Oshane Thomas removed Edwards with 33 still needed, but Alick Athanaze came to the crease gathered 23 not out in an unbroken, sixth wicket stand with Hodge to usher the Volcanoes over the finish line.

The other two visiting teams also won their matches.

The Jags, set a meagre 45 for victory following the Pride’s sudden collapse in the final session triggered by Permaul, held their nerve to reply with 48-4. With the victory, the Jaguars extended their lead at the top of the standings.

Jaguars slumped to 21 for four, but all-rounder Raymon Reifer, not out on 15, and his captain Leon Johnson, not out on 11, dashed any hopes of a Pride comeback.

Earlier, Permaul once again torpedoed the Pride’s batting with 4-73 from 25 overs, after Roston Chase hit nine fours in the top score of 68 from 150 balls in a shade over 3 ¼ hours and West Indies teammate Shane Dowrich stroked 65, his second half-century of the match, that included one-dozen fours from 87 balls in two hours to raise hopes of the Pride earning a draw.

After they were forced to follow on 188 behind on first innings, Pride stumbled to 97 for four after lunch, but the pair of Chase and Dowrich resisted with a stand of 107 for the fifth wicket either side of tea.

Once Dowrich was caught behind off Permaul in the second over after tea, there was token resistance from the rest of the batting, as the home team lost their last five wickets for 28 in the space of 74 balls.

Barbados-born, Test all-rounder Raymon Reifer ended with 3-53 from 23 overs for the Jags and Romario Shepherd 2-35 from 11 overs.

Jaguars opener Chandrapaul Hemraj was named Player-of-the-Match for his first innings hundred of 144.

Joseph was the pick of the Hurricanes bowlers with 4-22 from 12 overs and Cornwall grabbed 4-29 from 9.3 overs, as Red Force crumbled to 96 all out 15 minutes into the scheduled lunch interval.

Resuming on 26 without loss in pursuit of 342 for victory, Red Force lost Test batsman Kyle Hope and left-hander Amir Jangoo early in the day, but the hosts recovered to reach 72 for two before suffering an astonishing collapse that saw seven wickets crash for six runs in the space of 28 deliveries.

Left-handed opener Jeremy Solozano again led the way for the Red Force with 42 and was one of only two batsmen in double figures.

Hurricanes opener Montcin Hodge was named Player-of-the-Match for his outstanding batting. He made 158 in the first innings and 77 not out in the second innings.

WATCH: One shot, another injured on Manning’s Hill Road in St Andrew

WATCH: One shot, another injured on Manning’s Hill Road in St Andrew