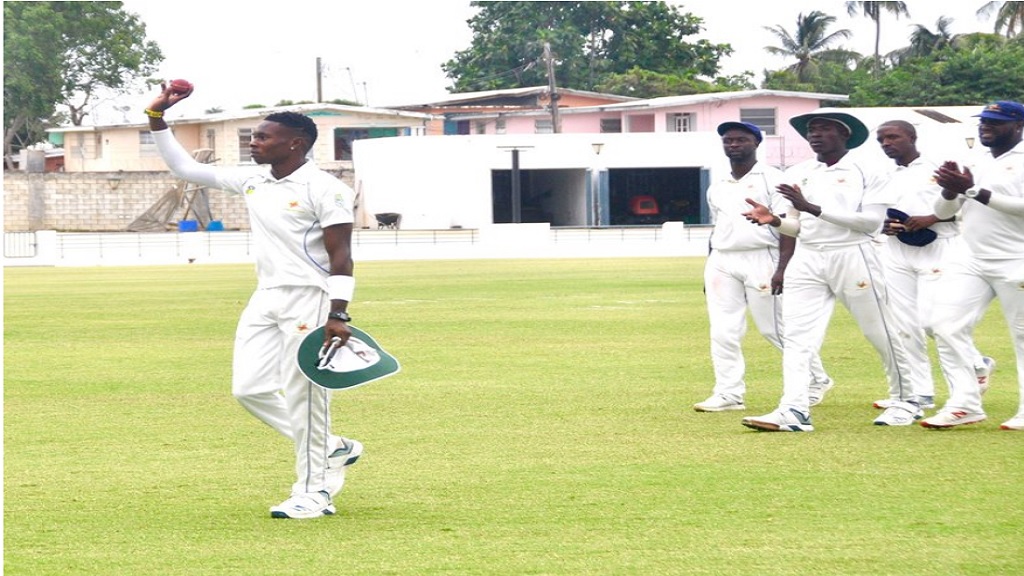 Jamaica Scorpios and Barbados Pride secured victories in the fifth round of the regional four-day championships at the weekend, while  Windward Islands Volcanoes earned a hard-fought draw with five-time defending champions Guyana Jaguars.

Over at the Trelawny Multipurpose Complex: A dashing innings from Nkrumah Bonner propelled Jamaica Scorpions to an unlikely five-wicket win over Leeward Islands Hurricanes in the gathering gloom and a huge leap up the championship table.

Bonner hit two fours and four sixes in an unbeaten 66 from 48 balls and the Scorpions successfully chased a target of 137 for victory to bring the first match at this venue in 11 years to a sensational conclusion.

He added 73 for the third wicket with Test batsman Jermaine Blackwood, after the hosts lost their openers inside the first three overs in what was effectively a 20-over chase.

Scorpions still needed 52, when Blackwood and Peat Salmon were both caught behind off successive deliveries in the 13th over, bowled by pacer Nino Henry.

A stand of 26 between Bonner and Denis Smith got the Scorpions past 100 and things back on track.

Scorpions needed 26 when Smith fell to West Indies off-spinner Rahkeem Cornwall, but Bonner scored all except one to get them over the finish line with 14 balls remaining.

Earlier, Terance Warde hit the top score of 74 and his captain Jahmar Hamilton supported with 54 to put up some resistance for the Hurricanes in the bottom half of their batting.

The pair completed a 110-run, third-wicket stand, after the Hurricanes resumed from their overnight total of 134 for four.

After Hamilton was bowled by Bonner, bowling his part-time leg-spin, and there was little stability from the rest of the batting with the Hurricanes losing their last six wickets for 61.

Pacer Nicholson Gordon was the pick of the Scorpions bowlers with 5-97 from 24 overs and was named Player of the Match.

The result meant that Scorpions now have 57.4 points and have jumped into a mid-table position. Hurricanes remain rooted at the bottom on 32.6.

Over at Kensington Oval in Barbados: A career-best spell of fast bowling from Keon Harding handed Barbados Pride a commanding 299-run win over Trinidad & Tobago Red Force and extended their lead on top of the table.

Harding grabbed 5-19 from 10.2 overs on the final day and ended with match figures of 10-76 to help the Pride complete their fourth successive win in the championship.

All, but three of the Red Force batsmen were dismissed for single-figure scores, and only Joshua da Silva, whose 23 was the top score, and Akeal Hosein passed 20.

Chasing 377 for victory, Red Force resumed from their overnight total of 48 for four and faced a huge task of batting through the final day to save the match. They were eventually bowled out for 77.

The task for them saving the match became more difficult when Harding gained a palpable lbw verdict to dismiss da Silva with the first ball of the day.

Harding carved up the bottom half of the Red Force batting and former West Indies Under-19 World Cup-winning fast bowler Chemar Holder kept him from the sweep when he bowled Hosein for 21 to finish with 3-29 from 11 overs.

The Pride fast bowler brought the match to a conclusion when he bowled Red Force tail-ender Uthman Muhammad and extracted his leg-stump in spectacular fashion.

The result meant that Pride now have 84.2 points and have extended their lead at the top of the table. Red Force now have 46.6 and have dropped back to fifth.

Over at the National Cricket Stadium in Grenada: An undefeated hundreds from long-serving opener Devon Smith and their captain Kavem Hodge, as well as rain, earned Windward Islands Volcanoes the draw against Guyana Jaguars.

Smith, the most prolific batsman in the championship, was unbeaten on 147 and Hodge was not out on 100.

The pair made hay while the sun shone, sharing a record 263 – unbroken – for the second wicket to erase any hopes of their opponents, the five-time defending champions, gaining the inside track to victory.

Resuming from their overnight total of 46 for one, Volcanoes faced a huge challenge to save the match, but Smith, whose 10,927 runs in 140 matches makes him the leading scorer in the championship, and Hodge made sure they had little worries.

The previous best second-wicket stand for the Volcanoes against the Jaguars was 120 between Smith and Jerlanie Robinson three seasons ago at the Beausejour Cricket Ground (now Daren Sammy Cricket Ground) in St. Lucia.

The weather interrupted about half-hour after tea and play never resumed.

Jaguars captain Leon Johnson was named Player of the Match for his undefeated, first-innings hundred that carried him past 5,000 runs in championship.

The result meant that Jaguars are second on 60.8 points, trailing Pride by 23.4, and Volcanoes are now fourth on 50.