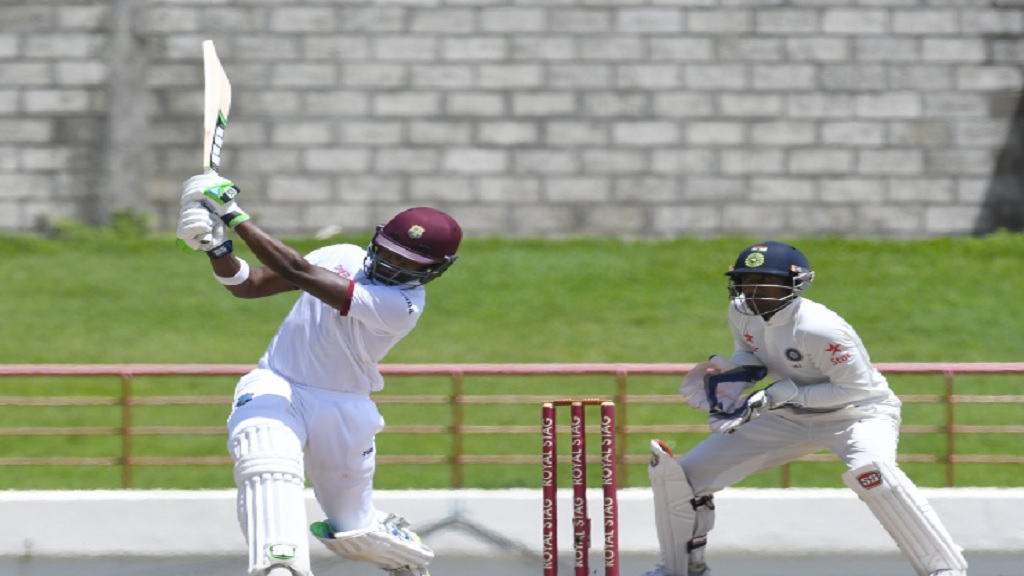 Jamaica Scorpions hold the upper hand against Trinidad and Tobago Red Force entering Friday’s second day of their fourth round match of the 2018-2019 West Championship at Sabina Park.

The return of West Indies batting star Darren Bravo grabbed the headlines at Sabina Park. However, Bravo made just 17, but he and the rest of the Red Force batting were made to battle against a keen Scorpions attack on a damp pitch.

Though play started on-time, the Red Force top order were unsettled by a number of deliveries that bounced alarmingly and at stumps they were struggling on 135-7.

Test batsman Kyle Hope was caught at gully off West Indies fast bowler Oshane Thomas for two in the first over of the match and Jeremy Solozano was caught at backward point off the same bowler in the fifth over.

Immediately following his dismissal, umpires Christopher Taylor and Deighton Butler, showing concern for the safety of the batsmen, ushered the players off the field, prompting a delay that lasted until a shade past the scheduled tea break.

On resumption, the pitch conditions had improved, and Bravo and fellow international Jason Mohammed battled for close to an hour, sharing 34 for the third wicket.

Bravo struck a couple of boundaries from 51 balls in close to 1 ½ hours at the crease before he was trapped lbw to a delivery from Rovman Powell that jagged back from outside the off-stump.

After his dismissal, Red Force lost four wickets for 30 in the space of 54 deliveries, slumping to 94 for seven.

But Yannic Cariah, not out on 22, and Khary Pierre, not out on 16, batted through 35 minutes before stumps were drawn to share 40 – unbroken – for the eighth wicket.

Jaguars vs Volcanoes in Providence, Guyana

Bramble slammed a dominant 168 to follow up his undefeated 130 against Barbados Pride last weekend at Kensington Oval and pass 2,000 first-class career runs, as Jaguars, the front-runners and four-time defending champions, enjoyed another run feast at the Guyana National Stadium on the first day of their match.

Bramble smashed 17 fours and six sixes from 153 balls in just over three hours at the crease to race to his third first-class hundred and lead a recovery for the Jags, after they chose to bat in their first home match of the season.

The hosts were under early pressure when the Volcanoes’ new-ball pair of Josh Thomas and Windies fast bowler Shermon Lewis removed opener Trevon Griffith for 14 and his captain, fellow left-hander Leon Johnson for five respectively, inside the first 45 minutes.

Windies batting star Shimron Hetmyer came to the crease and started to rebuild with Chanderpaul, sharing 44 for the third wicket before he was caught at slip off Ray Jordan for 26 just before lunch to leave the Jaguars 71 for three.

Bramble arrived and counter-attacked immediately and was undefeated on 113 at tea with the Jaguars on 212 for three before he was caught at first slip off Thomas in the final hour, triggering a slide that saw the home team lose three wickets for 10 in the space of 21 deliveries.

Meantime, Barbados Pride and Leeward Islands Hurricanes – the other two teams in the Championship – have had their fourth-round contest rescheduled to March.

Strugglers Scorpions and Red Force face off at Sabina Park