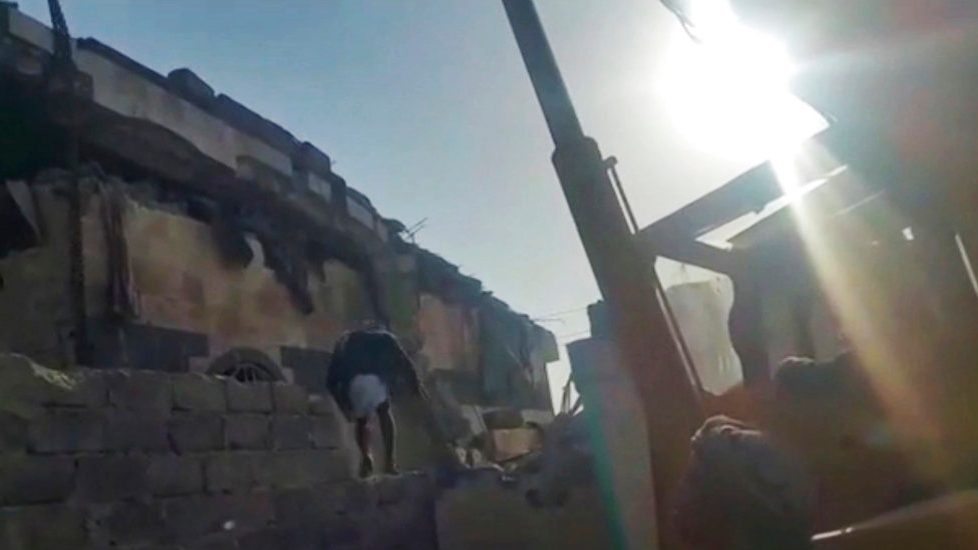 The family's 1-year-old baby was among those killed, they said, looking over the rubble of one of the bombed homes in the city's southern district of Fag Attan, hours after the attack.

The bombing was the latest in a significant escalation in the Saudi-led coalition's air campaign in Yemen. On Wednesday, at least 41 people died when airstrikes bombed a small hotel in the town of Arhab, north of Sanaa.

The attack prompted the United Nations to renew calls for an investigation into the atrocities in Yemen's civil war.

Over the past two years, more than 10,000 people have been killed and 3 million displaced amid the coalition's relentless air campaign against Yemen's Iran-backed Shiite rebels. The Saudi-led campaign is seeking to restore Yemen's internationally recognized government back to power.

The worst-hit house in Friday's attack in Fag Attan was a three-story building occupied by at least three families. Mohammed al-Rimi and his wife lived on the first floor with their six children. A brother-in-law was visiting. They all perished, except one child.

Mohammed's brother, Ali Nasr al-Rimi said he was speaking with him on the phone when the airstrikes started.

"We heard the first, second and third explosion, then after the forth blast, the line was cut," he said. "I was so afraid, I rushed to the house. I couldn't recognize the place."

For hours, he said he had been retrieving the bodies of his brother's family, "all torn into pieces." One of his brother's children survived, three-year-old Bothina. Her leg was smashed by a huge chunk of cement, Ali Nasr al-Rimi said.

Another relative sat by in shock, helplessly watching bulldozers removing rubble and searching for more bodies. The death toll was expected to rise.

Recently, the strikes in and around Sanaa, targeting army compounds and other locations of the rebels known as Houthis, have intensified. Liz Throssell, a spokeswoman for the U.N. High Commissioner for Human Rights, said the U.N. has confirmed that 33 of the 41 people killed in Arhab were civilians.

The Saudi-led airstrikes have hit schools, hospitals, and markets, killing thousands of civilians and prompting rights groups to accuse the coalition of war crimes. Activists have called upon Western countries, including the United States and Britain, to cease their military support for the coalition.

In addition to civilian casualties, the conflict triggered a set of humanitarian crises including cholera epidemic which killed around 2000 people and infected over half a million as Yemen's health, water, and sanitation systems were near collapse while shortage in basic necessities left millions hungry and pushed the impoverished nation to the brink of famine.

The escalation comes amid signs of fracturing between the two main components of the rebel alliance in Sanaa, the Houthis and loyalists of ousted President Ali Abdullah Saleh — a standoff that has triggered fears of street violence.

The rebel alliance controls much of northern Yemen, including Sanaa while the coalition along with the internationally-recognized government of Abed Rabbo Mansour Hadi controls much of the south.

On Thursday, ex-president Saleh drew about 300,000 supporters for a rally in the streets of Sanaa in a public show of support for him amid the tensions with the Houthis. Saleh's supporters said in a statement that the party will evaluate its partnership with the Houthis.

Yemen's brutal war has shown no signs of abating and U.S. support for the coalition led by Riyadh appears to be only increasing.

On Wednesday, Gen. Joseph Votel, the top U.S. commander for the Middle East, visited the Saudi-Yemen border for a first-hand look at the kingdom's military fight against Yemen's rebels — a visit that coincided with the attack in Arhab.

Vincentian woman dies after being set on fire for refusing sex