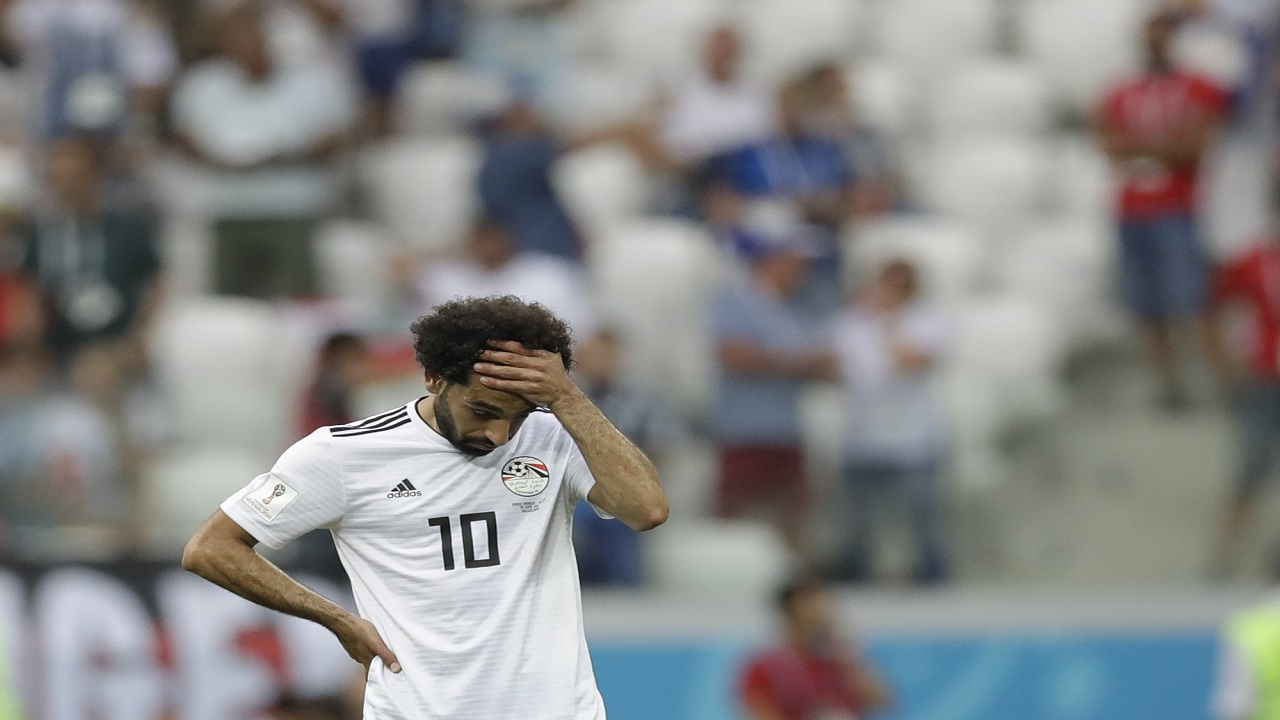 Egypt's Mohamed Salah reacts after Saudi Arabia's Salem Aldawsari scored his side' second goal during the group A match between Saudi Arabia and Egypt at the 2018 soccer World Cup at the Volgograd Arena in Volgograd, Russia, Monday, June 25, 2018. (AP Photo/Andrew Medichini)

The oldest person to play in a World Cup match gave up a pair of goals Monday, allowing Saudi Arabia to beat Egypt 2-1 in a game between two teams that had already been eliminated.

Egypt goalkeeper Essam El Hadary, who is 45, took the field for his team's final group match to set the record.

Although he gave up the two goals, he also saved a penalty in the first half. 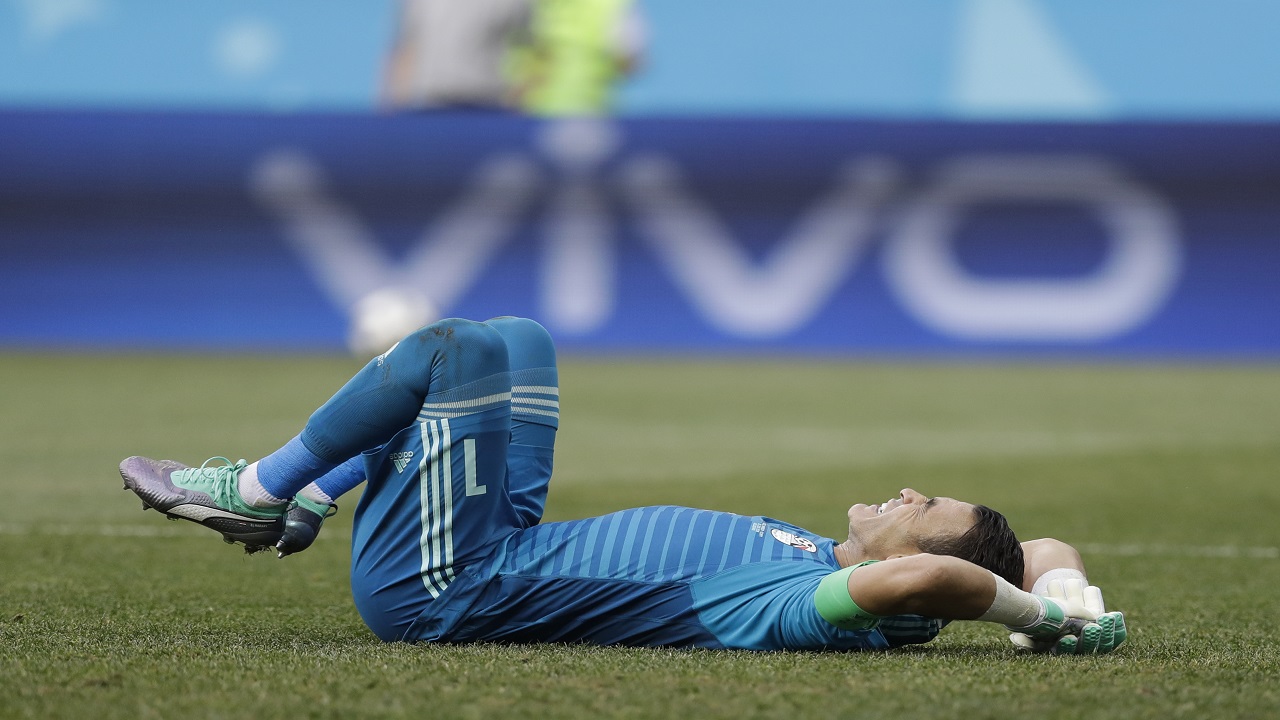 Egypt goalkeeper Essam El Hadary reacts in pain during the group A match between Saudi Arabia and Egypt at the 2018 soccer World Cup at the Volgograd Arena in Volgograd, Russia, Monday, June 25, 2018. (AP Photo)

Salem Aldawsari scored with almost the last kick of the match for the Saudis, shooting from a tight angle inside the Egypt penalty area and poking the ball past El Hadary.

Mohamed Salah had put Egypt ahead in the 22nd minute when he deftly controlled a long ball from Abdalla Said that split the Saudi defense and then lobbed goalkeeper Yasser Almosailem.

It was Egypt's first goal in open play at the World Cup since 1934.

Salman Alfaraj got the Saudis level with a penalty kick in first-half stoppage time after Ali Gabr brought down Fahad Almuwallad in the area. The decision was confirmed after a video review and the penalty was taken in the sixth minute of injury time. 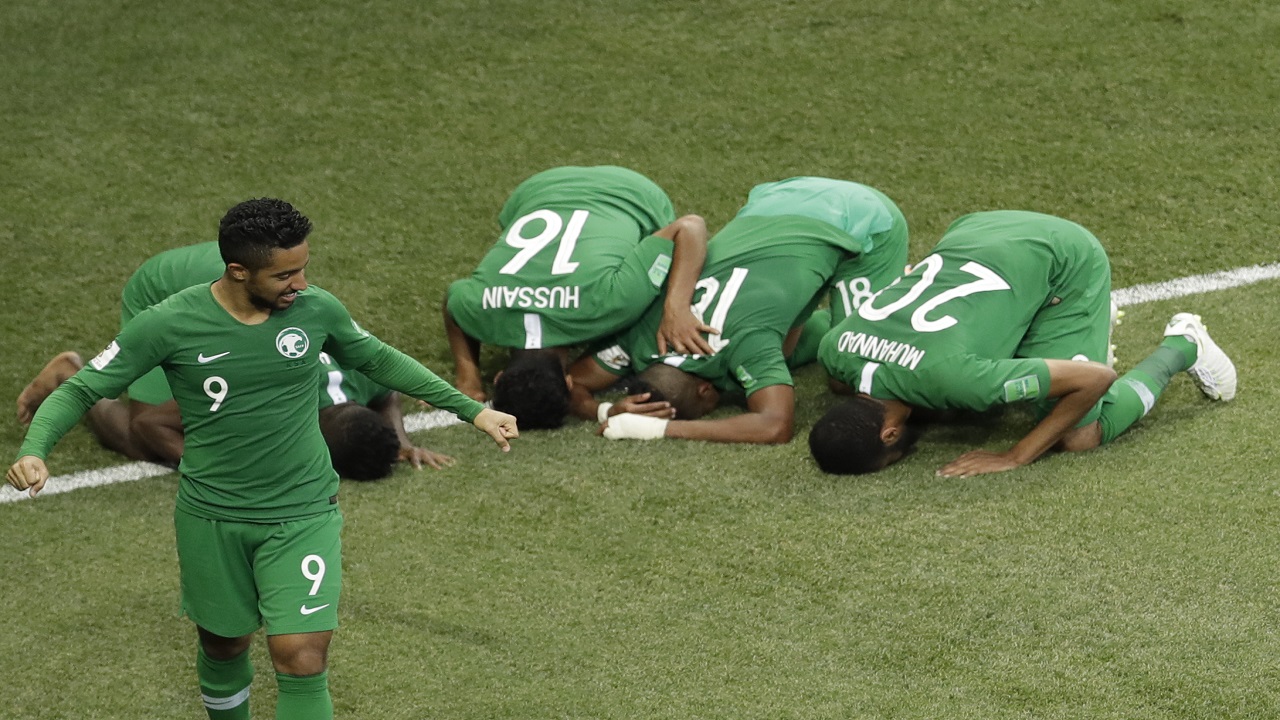 Saudi Arabia's Salem Aldawsari , second from right, celebrates with teammates after he scored his side;s winning goal during a group A match against Egypt at the 2018 soccer World Cup at the Volgograd Arena in Volgograd, Russia, Monday, June 25, 2018. Saudi Arabia won 2-1. (AP Photo).

Saudi Arabia finished Group A in third place with three points, while Egypt was last after losing all three of its games.

Almuwallad had earlier missed a chance to equalize when El Hadary saved his penalty. The veteran goalkeeper dived to his right and flicked his left hand up to push the shot onto the bar before it was cleared.

El Hadary was unable to repeat the feat when Alfaraj lined up against him at the end of the half, going the wrong way and having no chance.

El Hadary also made a series of good saves in the second half to deny Saudi Arabia, notably in the 69th minute when he tipped a header from Hussain Almoqahwi over the bar. A minute later, he parried away a goal-bound header from Muhannad Asiri.

El Hadary overtook Faryd Mondragon as the oldest person to play at the World Cup. The Colombia goalkeeper was 43 when he came on as a late substitute in his team's 4-1 victory over Japan four years ago at the World Cup in Brazil.