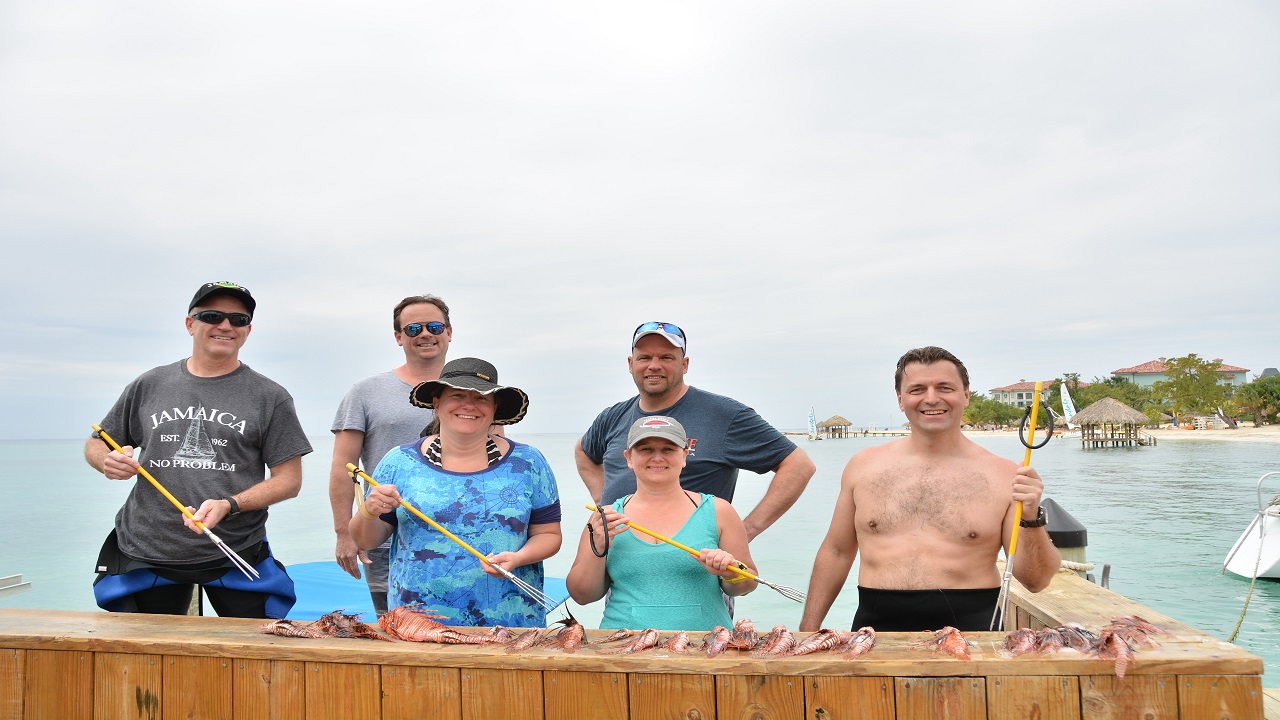 Since the threats presented by the invasive Lionfish were brought to national attention, the Sandals Foundation has introduced and participated in a number of programs to help bring awareness to and control the lionfish population in the Caribbean.

Its most recent initiative offers guided dives to Sandals and Beaches Resorts guests to hunt and kill the predatory species.

The lionfish is known to wreak havoc on reefs and other local ecosystems, destroying stocks of other fish populations by consuming young native fish. Environmental Officer at the Sandals Foundation, Johnathan Hernould, said hunting the lionfish is the only way to reduce their population as they have no known predators and reproduce at an alarming rate.

“We have to do our part in protecting the biodiversity of our marine environment as the lionfish is essentially very destructive to the underwater ecosystem. They devour 30 times their stomach volume of juvenile fish a day and one female spawns around two million eggs a year. They have no known predators and move from reef to reef, clearing each of juvenile fish which we cannot allow,” Hernould said.

To intensify its efforts, guests staying at the all-inclusive resorts can sign up to be part of the weekly dives to hunt lionfish. To date, the Foundation has assisted in scientific research and training undertaken by Marine Expert, Dr. Dayne Buddo at the University of the West Indies.

“We have also hosted a number of workshops with Dr, Buddo across the region to teach dive operators, fishermen and government officials how to monitor lionfish and control the populations. As hunting is the only way of reducing their population, we’ve also supported tournaments for local fishermen to hunt and kill lionfish,” Hernould said.

Utah resident Mathew Flitton went on his first lionfish-hunting dive last Thursday at Sandals Whitehouse where he and his friends hunted the species with guide divers from the resort.

“I heard about them (lionfish) when I was vacationing in Riviera Maya (Mexico) and we saw some there but we didn’t aggressively go after them, we only saw them. The dive guides explained to us that they were an invasive species but there was not much we could do about it but I really like this approach of going after them with spear guns,” Flitton said.

Flitton, who said he has been diving since 1999 said, though he had never interacted with lionfish before the dive, he was not nervous as he was diving with experts.

The lionfish hunting dives require three member teams with a spotter who looks for the lionfish and points them out to the hunter who, using a pole spear, spears the lionfish before carefully placing it into a zookeeper being carried by the third team member.

Flitton said he has never eaten the fish but was looking forward to doing so before leaving the resort. “I have never eaten lionfish before but I would definitely want to try it. I think this is a great programme to cut back on the invasive species because they are obviously doing damage to the coral reefs and ecology.”

Preparation for the dives involve classroom theory before going on the actual dives. Expert divers receive an additional Professional Association of Diving Instructors (PADI) certification which will allow them to hunt lionfish elsewhere. Part of the funds collected from the dives goes towards funding the foundation’s marine conservation projects.