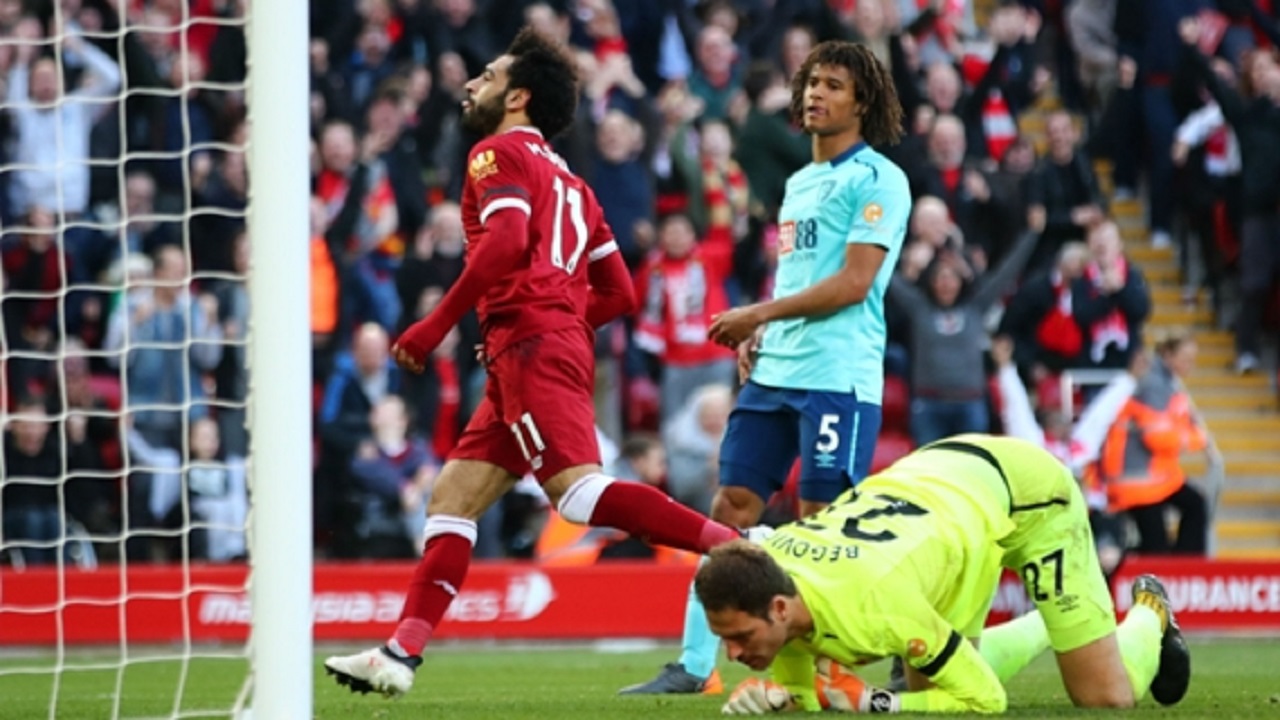 Mohamed Salah reels away to celebrate his 40th Liverpool goal.

Mohamed Salah became the third Liverpool player in history to score 40 goals in a single season by netting once again in a 3-0 win over Bournemouth on Saturday.

The Egypt forward joined Roger Hunt and Ian Rush in the 40 club with a second-half header that added to Sadio Mane's early strike and preceded Roberto Firmino's late goal.

Salah's goal, his English Premier League-leading 30th, increased his advantage over Harry Kane in the Golden Boot race while strengthening Liverpool's grip on a top-four finish.

Juergen Klopp's third-place side has a 10-point cushion over fifth-place Chelsea.

The victory rounded off a fine week for Liverpool, which sealed a Champions League semifinal against Roma by beating Manchester City 5-1 on aggregate.

Klopp acknowledged on Friday the forthcoming tie with Roma would be at the forefront of fans' minds, but his immediate priority of securing a top-four league finish was evident by the fact he made just one change to his team.

And four days after beating City his players backed up that attitude by making a flying start.

Salah could have scored after three minutes, prodding a great opportunity wide from Trent Alexander-Arnold's whipped cross, but the first goal came in the seventh minute.

Jordan Henderson, who was brought into the XI for James Milner, spotted Mane in the box. Although the Senegalese's header was saved by Asmir Begovic, the ball came back to him to stick away the rebound.

It continued to be one-way traffic in the opening 45 minutes and Begovic denied Alexander-Arnold and Salah before Bournemouth finally threatened.

Yet even that attack was halted by the assistant's flag as Ryan Fraser was offside prior to collecting Charlie Daniels' back-heel and crossing for Jermain Defoe to tap home.

For all of Liverpool's dominance, the hosts had only one goal to show for it in the first half as Salah continued to be frustrated, with Steve Cook's brilliant challenge denying him.

There was a lack of intensity from both sides at the start of the second period, understandable given the early advantage Liverpool claimed and Bournemouth's position well clear of the relegation zone.

Salah certainly still had motivation in his battle to beat Kane to the Golden Boot, but there was a sense it might not be his day when he failed to win a penalty after a coming together with Nathan Ake.

Referee Chris Kavanagh was unmoved, but that ball over the top to Salah showed the way to get him in and he finally scored in the 69th.

Alexander-Arnold clipped a pass over Ake's head and on to Salah, who nodded superbly over Begovic and into the net for his 40th goal of a remarkable debut campaign at Anfield.

Mane and Firmino both came close to adding a third, while at the other end Dan Gosling fired at Loris Karius.

Then, the only player in Liverpool's attacking triumvirate without a goal found the target. Firmino collected a pass inside the box from Alex Oxlade-Chamberlain, took a touch inside and steered a shot through Simon Francis' legs and past Begovic's dive.