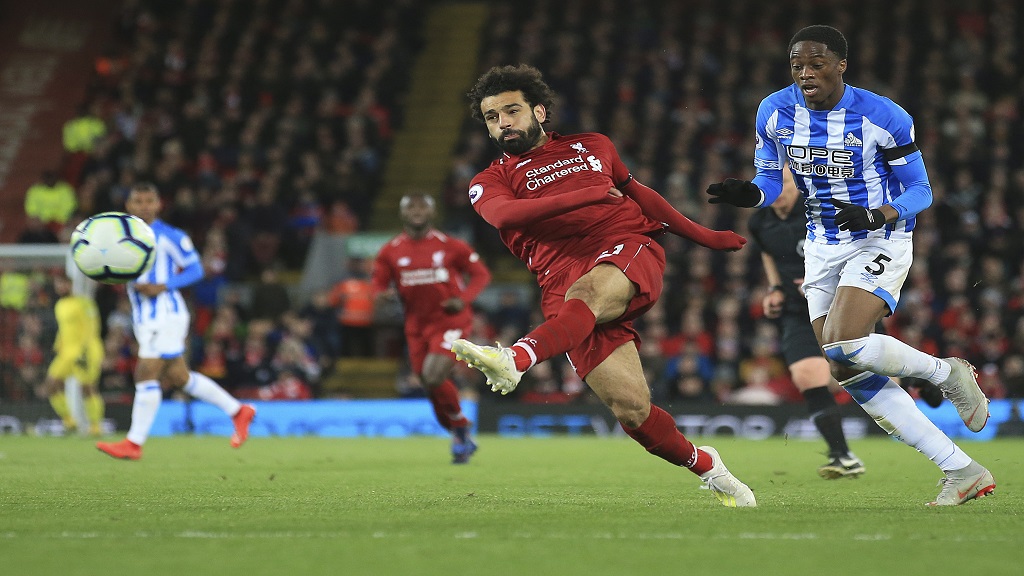 Sadio Mane and Mohamed Salah both scored twice after Naby Keita's rapid opener as Liverpool thumped Huddersfield Town 5-0 to move back to the top of the Premier League table.

After Manchester City took over at the summit following their victory at Old Trafford on Wednesday, Jurgen Klopp's side responded impressively to put the pressure back on Pep Guardiola's side – who face Burnley on Sunday – in the title race.

The Reds did not have to wait long to take the lead on Friday, Keita tucking in Liverpool's fastest ever Premier League goal after just 15 seconds, before Mane's fine header doubled their advantage.

Salah got in on the act on the stroke of half-time and the Egypt forward doubled his tally after Mane had headed home a second of his own, the duo helping Liverpool send out a message ahead of their Champions League clash with Barcelona.

Any doubts over how Liverpool would react to being usurped by City were swiftly cast aside, Keita taking full advantage of Jon Gorenc Stankovic's error when he slotted in off the inside of a post.

Huddersfield responded brightly – Stankovic and Isaac Mbenza squandering decent opportunities – but Liverpool had their second when Mane headed in from Andrew Robertson's brilliant cross in the 23rd minute.

Liverpool's first-half rout was completed in added time, Trent Alexander-Arnold's inch-perfect pass setting up Salah, who made no mistake with a delicate finish over the advancing Jonas Lossl.

Having gone close with a looping effort shortly after the restart, Mane doubled his tally with another superb header in the 66th minute.

Substitute Alex Oxlade-Chamberlain – making his first appearance in 367 days - would have completed a fairytale comeback from injury if not for a fine save by Lossl, while the post denied Mane a hat-trick of headed goals.

Determined not to be outdone by his team-mate, Salah helped himself to his second with seven minutes remaining, adding further gloss to an exceptional performance.