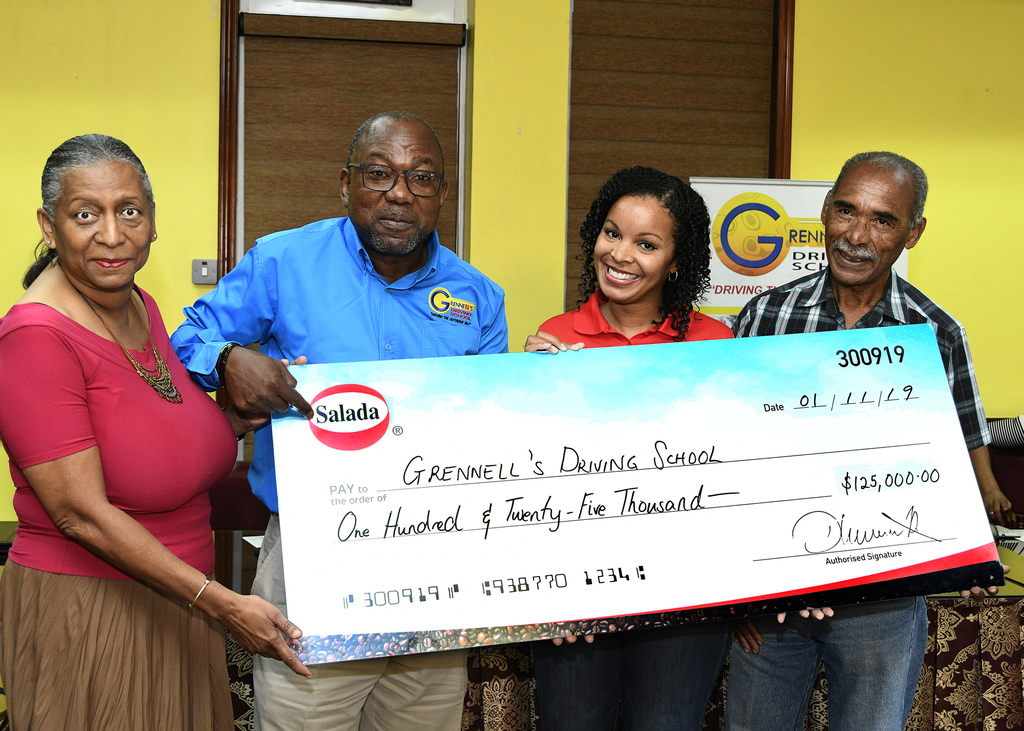 Salada Foods Jamaica business manager Sherianne Thompson Hart (second right), presents a sponsorship cheque valued at $125,000 to Alphonso Grennell (second left), managing director of Grennell’s Driving School for the ninth staging of the Grennell’s Road Safety 5K. Sharing in the moment are Claudia and Errol Alliman, parents of crash victim, Jason Alliman for whom the race is being held in memory.

Salada Foods Jamaica is reaffirming its commitment to road safety through its sponsorship of the Grennell's Road Safety 5K race.

The Grennell's Road Safety 5K race will be held on Saturday, November 16. Proceeds of this year’s 5K will go towards the Percy Junior Hospital in Spalding, Manchester.

This year’s staging is being held in memory of Jason Alliman, a young prosecutor who lost his life as a result of a motor vehicle crash in 2015.

"This 5K is telling people that we need to see a stop to what is happening on our roads. This is to remember people and to encourage people to give support to family members who are going through tough times," said chairman of the event, Alphonso Grennell.

Business Manager at Salada Foods Jamaica, Sherianne Thompson Hart said the company was compelled to support the 5K, as most Jamaicans have been impacted by road crashes.

“Road safety affects all of us as Jamaicans, we hear about motor vehicle accidents every day, we see it for ourselves during our daily commute,” Thompson Hart said, noting that road fatalities are already up 17 per cent over last year.

For the third year in a row, Salada Foods is supporting the Grennell's Road Safety 5K race under its flagship brand, Jamaica Mountain Peak.

The Grennell's Road Safety 5K race will start on Palmoral Avenue, off Mona Road at the entrance of Grennell’s Driving School. Participants will then head towards the Mona Aqueduct; turn left onto Garden Boulevard then onto to Old Hope Road along the US Embassy and then onto Munroe Road. They will then proceed onto Wellington Drive and complete the race on Mona Road.

“I know that this 5K may be considered a relatively small effort in promoting road safety. But if more people and more sponsors take up the challenge like this to promote road safety, it would help the government and other state agencies to rid the roads of the scourge that we see on the roads today,” Alliman said.

He expressed a need for improvements in technology to assist in the clampdown of recklessness on the nation’s roads.

In her message at the launch, Executive Director of the National Road Safety Council (NRSC), Paula Fletcher urged the authorities to put systems in place to punish drivers who have amassed hundreds of tickets and have displayed a wanton disregard for road rules.

A total of 349 persons have lost their lives in road crashes so far this year.

“Usually 30 per month die come November and December and if we continue on this path, it’s going to go over 400. It’s a trend that is alarming, if we don’t reverse it as a nation, we are going to pay,” Fletcher stated.