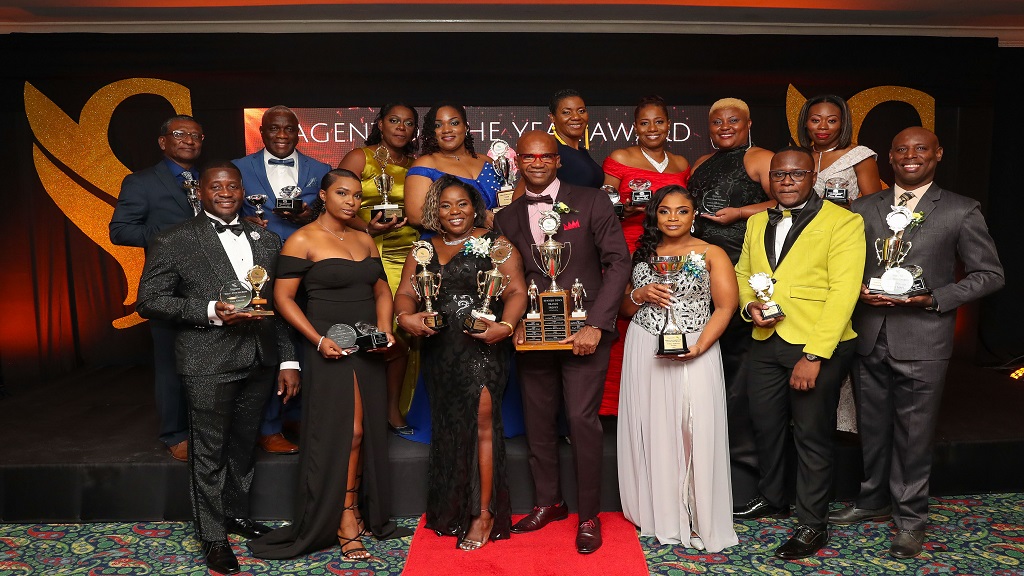 Awardees from the Sagicor Life Jamaica Spanish Town branch displayed their trophies following an awards ceremony for the branch at Knutsford Court Hotel in Kingston on Saturday, March 7.

It was an evening of glitz and glamour as financial advisors and Sagicor executives celebrated excellence at the Spanish Town Branch Awards Ceremony on Saturday,  March 7.

The ceremony, held at the Knutsford Court Hotel, which featured high-fashion and entertainment, including a performance by recording artist Nesbeth, awarded advisors and administrative staff who displayed excellent performance in 2019.

Christopher Zacca, president and CEO, Sagicor Group Jamaica, hailed the Spanish Town team for continuously raising the bar and delivering on a commitment for success.

“The passion from this team is evident and has shown itself in the work you have produced. Continue to make us all proud, we are very happy with the dedication coming from the Spanish Town team,” he said.

Mark Chisholm, executive vice president, Sagicor Life Jamaica, hailed the awardees, noting that they have all contributed significantly to the success of the Sagicor brand.

“For this year, our focus is to continue to build on the legacy on which we stand. This year can be the year of 20Plenty for Sagicor and it can be the same for you, your family, your clients, and Jamaica at large. Continue to put in that hard work,” he said.

Dwayne Lewis walked away with the coveted trophy for Best Conservation, while Carolyn Hibbert was awarded for best product mix.

The annual awards ceremony also recognised financial advisors who qualified for the Million Dollar Round Table (MDRT), a global, independent association of life insurance and financial services professionals; as well as qualifiers to the Century Club, advisors who completed over 100 cases during the year. Branch administrators and personal assistants to the advisors were also recognised.