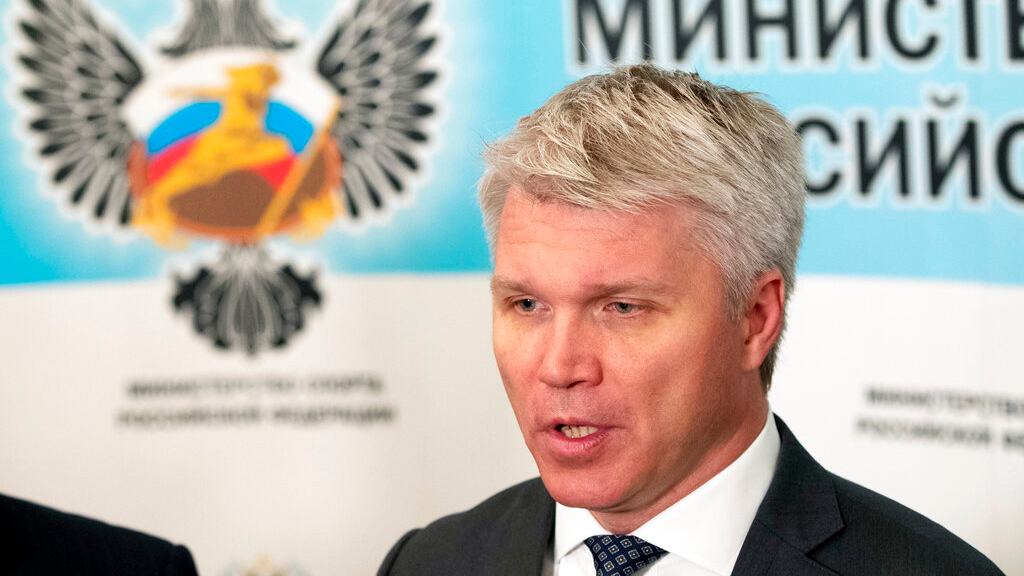 Russian Sports Minister Pavel Kolobkov speaks to the media in Moscow, Russia, Wednesday, July 24, 2019. With a year to go until the Olympics open in Tokyo, Russia believes it can emerge from the shadow of doping scandals and surge up the medal table. (AP Photo/Pavel Golovkin)

Russia will become a force in the medals table at next year's Tokyo Olympics despite its current doping problems, the country's sports minister said Wednesday.

Russia won just 19 gold medals at the 2016 Olympics in Rio de Janeiro, its lowest count since Soviet days. It was fourth in the medals table behind the United States, Britain and China.

"We're not thinking about lawsuits or arguments. We're preparing calmly," Sports Minister Pavel Kolobkov said. "In most sports, even in sports where we didn't have great results a while back, we will be competing for medals."

Russia was allowed to field only one athlete in track and field and none in weightlifting because of measures imposed in the wake of doping cases. Two years later at the Winter Olympics in Pyeongchang, Russia's team was officially barred for past doping offenses, and a diminished team of "Olympic Athletes from Russia" competed instead.

Russia was formally readmitted by the International Olympic Committee after the Pyeongchang Games and restrictions on its roster will be relaxed next year compared to the last Summer Olympics.

Dozens of Russians have passed vetting from the IAAF and are now allowed to compete internationally in track. Russia will only be able to send one male and one female weightlifter to Tokyo under new rules restricting quotas for countries with a history of doping in that sport. China, India and Iran are among 16 other countries hit by the weightlifting rule change.

"Roughly speaking, we understand we've already formed a pool of athletes who can compete for (Olympic) medals. I can say that we'll be competitive in 20 sports," Kolobkov said. "So we're expecting a very interesting year of qualification for the Olympics, and I'm sure the Olympics will please our fans with good results."

The five new sports on the Olympic program for Tokyo, including skateboarding, baseball and surfing, generally don't play to Russia's traditional strengths. However, officials say they are drawing up plans to help more young Russians to train for those events.