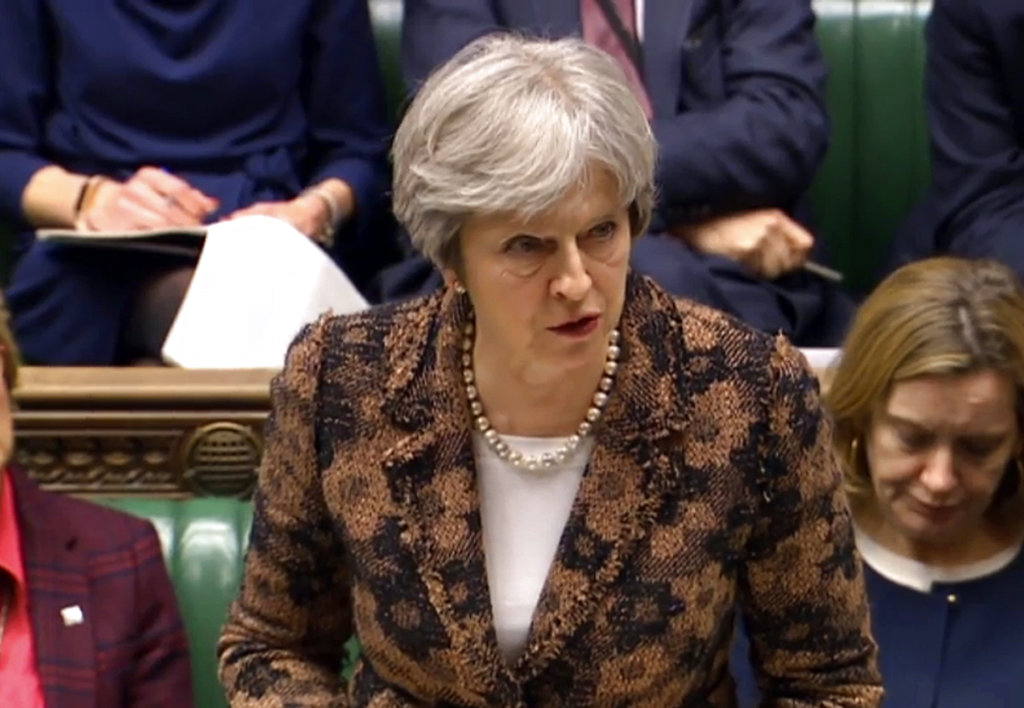 ritain's Prime Minister Theresa May speaks in the House of Commons in London. (PA via AP)

Russia will only cooperate with Britain on the investigation into last week's poisoning of an ex-Russian spy and his daughter if it receives samples of the nerve agent that is believed to have been used, Russia's foreign minister said Tuesday.

Sergey Lavrov spoke in response to the British government's demand for an explanation of the use of a military-grade nerve agent produced in Russia in the attack in the English city of Salisbury.

Lavrov told reporters on Tuesday Moscow's requests to see samples of the nerve agent have been turned down, which he called a violation of the Chemical Weapons Convention, which outlaws the production of chemical weapons. He insisted that Russia is "not to blame" for the poisoning.

He said Moscow is willing to cooperate with the probe but suggested that London would be "better off" complying with its international obligations "before putting forward ultimatums."

Russian news agencies reported that the Foreign Ministry has summoned the British ambassador in Moscow over the poisoning.

British Prime Minister Theresa May said Russia's involvement is "highly likely" and delivered a Tuesday deadline for a Russian response.

Officials said Tuesday Prime Minister Theresa May is reviewing a range of economic and diplomatic measures in retaliation for the assault with a military-grade nerve agent.

May's conclusion, based on assessment from the police and intelligence services, is leading to a major confrontation between Britain and Russia, which has taken an increasingly aggressive posture toward Europe in recent years.

The prime minister says Russia has until the end of Tuesday to explain its actions in the case.

Foreign Secretary Boris Johnson said Tuesday that Britain is talking to its international partners about the situation.

"I've been encouraged by the willingness of our friends to show support and solidarity," he said.

"I think in particular from President (Emmanuel) Macron of France, I talked to Sigmar Gabriel my German counterpart, and from Washington where Rex Tillerson last night made it absolutely clear that he sees this as part of a pattern of disruptive behavior ... malign behaviour by Russia ... the support for the reckless use of chemical weapons which stretches from Syria now to the streets of Salisbury."

U.S. Secretary of State Rex Tillerson told reporters late Monday that Russia's actions would "certainly trigger a response." He said it was "almost beyond comprehension" that a government would use such a dangerous substance in a public place.

The chief of the world's chemical weapons watchdog also said that those responsible "must be held accountable."

In a speech Tuesday to the Executive Council of the Organization for the Prohibition of Chemical Weapons, Director-General Ahmet Uzumcu said Johnson called him Monday evening to inform him of the results of investigations.

"It is extremely worrying that chemical agents are still being used to harm people. Those found responsible for this use must be held accountable for their actions," he said.

Skripal, a former Russian military intelligence officer, was convicted of spying for Britain and then released in a spy swap. He had been living under his own name in the small city of Salisbury for eight years before the attack without attracting any public attention.