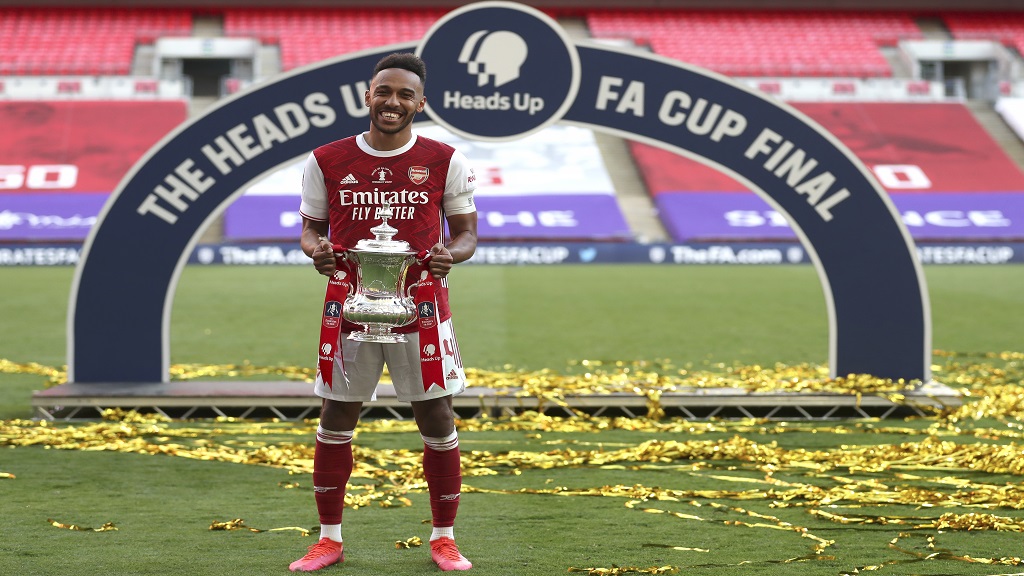 Arsenal's Pierre-Emerick Aubameyang poses with the trophy after the FA Cup final against Chelsea at Wembley stadium in London, England, Saturday, Aug.1, 2020. (Catherine Ivill/Pool via AP).

With Aubameyang due to become a free agent in 2021, Arsenal have been desperate to re-sign the Gabon international.

Now, it looks like the 31-year-old will remain at Emirates Stadium for an extended period.

Pierre-Emerick Aubameyang is close to signing a new three-year contract with Arsenal, according to The Telegraph.

Aubameyang's current deal is due to expire next year and the Arsenal star has been linked to LaLiga giants Barcelona, as well as Ligue 1 champions Paris Saint-Germain (PSG) and Inter.

But Aubameyang is set to sign a deal that will run until 2023, a two-year extension.

- Journalist Fabrizio Romano claims it is only a matter of time before Willian signs a contract with Arsenal until 2023. Chelsea midfielder Willian is free to talk to clubs as his deal at Stamford Bridge expires. The Gunners are also eyeing Thomas Partey but Atletico Madrid insist the midfielder will not leave unless his £45million (€50m) release clause is paid.

- Paul Pogba is happy at Manchester United and is ready to sign a new contract, reports Romano. Pogba has been previously linked to former club Juventus and LaLiga champions Real Madrid.

- Staying at Old Trafford, and The Guardian claims United will listen to offers for Jesse Lingard as they try to prise Jadon Sancho from Borussia Dortmund. United and Dortmund are still negotiating a transfer for Sancho, according to widespread reports.

- According to The Athletic, Pierre-Emile Hojbjerg is set to join Tottenham from Southampton. Spurs will pay £19m for the former Bayern Munich midfielder.

- Liverpool will have to pay close to £20m for Norwich City left-back Jamal Lewis after the Premier League champions had a £10m offer rejected, says The Guardian.

- David Silva looks set to move to Lazio. According to Sky Sport Italia, the Manchester City midfielder – a free agent – will swap the Premier League for Serie A following the club's Champions League campaign.

Rumour Has It: Coutinho close to Arsenal move