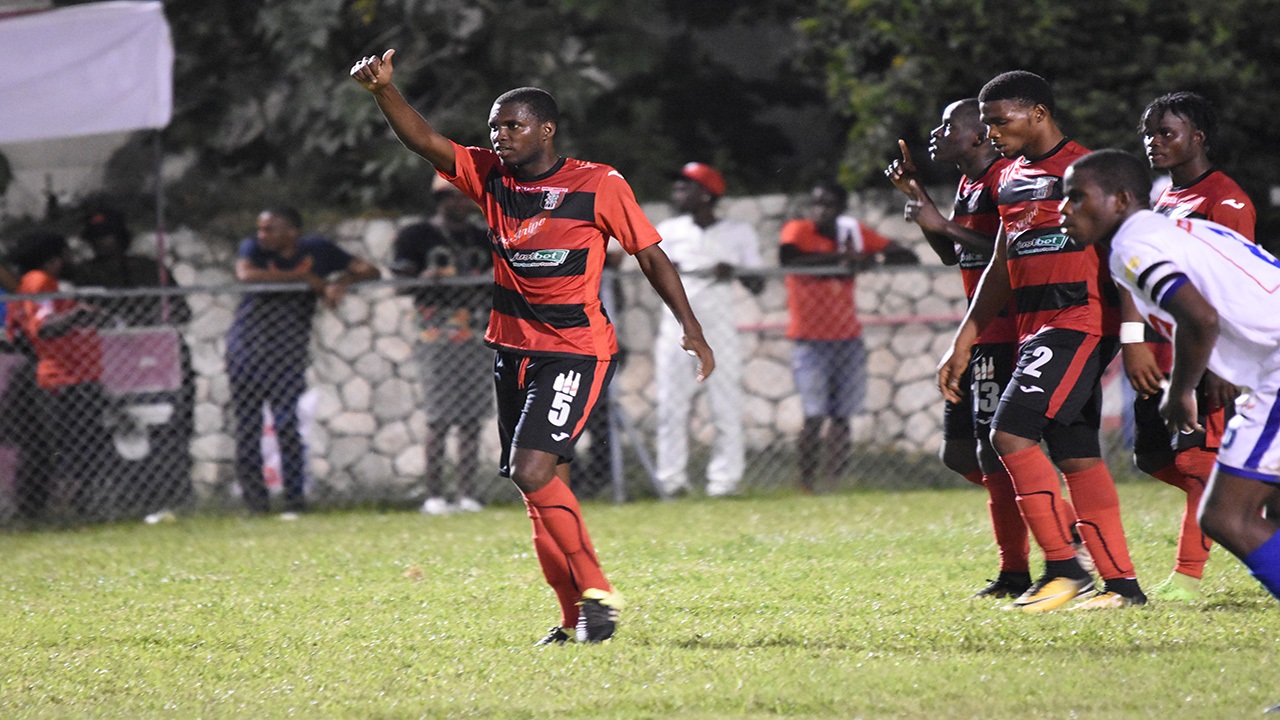 With seven more matches remaining in the preliminary round, Boys' Town - which moved to 17 points from 27 games - can only finish on maximum 35 points. And with four of the teams in the bottom half of the 12-team competition having already tallied 30 and over points, Boys' Town could be relegated long before they completed their other seven games.

However, the victory on Sunday kept them in the competition for at least another round of matches.

Daemion Benjamin led Boys' Town to the victory with a goal in each half.

Benjamin scored his first goal in the second minute to put Boys' Town 1-0 ahead, but Arnett Gardens hit back in the 69th minute through Shamar Pryce. Benjamin broke the deadlock with his second goal in the 81st minute to lead Boys' Town to only their third victory from 27 games.

Sandals South Coast opened up a two-goal lead through Claudious Blackburn in the fifth minute and Dervin Campbell in the 35h minute, but Montego Bay United scored four unanswered goal to pull off a comfortable victory in the end.

Dino Williams led Montego Bay to the victory with a double strike in the 24th and 59th minutes, while Ronaldo Rodney (56th minute) and Lesly St. Fleur (90+2) added the other goals.

As a result of the victory, Montego Bay United improved from eighth place to seventh on 34 points, just a point below the top half of the table.

At the end of the preliminary round, the top two teams on points will advance straight to the semi-finals; while third to sixth place will enter into a play-off for the other two semi-final spots. The bottom two teams will be relegated.

Meanwhile, Tivoli Gardens improved their chances of finishing the preliminary round in the top two by scoring an important 3-1 victory over Cavalier at the Edward Seaga Stadium.

The victory means that fourth-place Tivoli (40 points from 25 games) moved within two points of third-place Cavalier (42 points from 27 matches) and five points behind second-place Arnett Gardens (45 points from 25 matches).

Portmore United (53 points from 25 matches, which are leading the table by eight points, did not compete on the day due to their participation in Group B of the 2018 CONCACAF Caribbean Club Championship in Dominican Republic.

Tivoli Gardens wrapped up the game in the first half by opening up a three-goal lead in the space of 16 minutes, through a double strike from Junior McGregor (18th and 20th minutes) and a 44th minute strike from Andre Moulton.

Kaheem Parris pulled back a goal for Cavalier in the 69th minute.

In the day's other game, Reno scored an away 2-0 victory against University of the West Indies (UWI) FC at the UWI Mona, Bowl. Ramond Plummer (49th and 64th minutes) scored both goals for the visitors.

MONDAY'S MATCH
Waterhouse vs Harbour View at Drewsland Stadium at 8:35