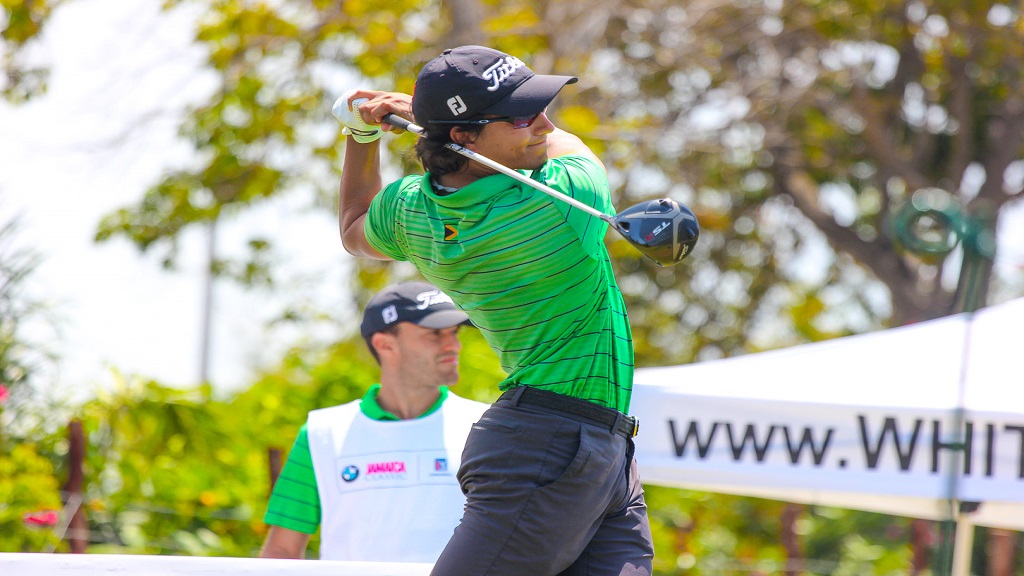 Jamaican Ian Facey in action on the opening day of the BMW Jamaica Classic at the Cinnamon Hill Golf Course in Montego Bay on Thursday, May 16, 2019.

Pro golfer Ian Facey had the best score of the three Jamaicans in the line up on the opening day of the PGA Latinoamerica BMW Jamaica Classic at the Cinnamon Hill Golf Course in Montego Bay on Thursday.

In fading light, Facey completed his round with three over par 75 to be tied for the 121st position in the 144-man field.

The Florida based golfer birdied holes one and three to get off to a favourable start, however, a double bogey on hole number four and three bogeys on holes seven, eight and nine put the skid on the Jamaican round.

Three more bogeys on holes 13, 14 and 15 looked to knock the stuffing out of Facey, however back-to-back birdies on holes 16 and 17, rescued what would have been a more disastrous round.

Burrowes also started well with two birdies on the front nine, however, it all went downhill for the youngster on the back nine, where he bogeyed seven of the nine holes.

Compatriot Orville Christie fared even worst, his eight over par 80 was good enough for second to last in the field. Only American Luke Llaneras had the worst round of 11 over par 83.

In the meantime, Americas Tom Whitney, Hunter Hamrick and Canadian Stephen Thomas are all tied for the early lead following their rounds seven under par 65.

Whitney, who turned 30 on Thursday, racked up five birdies and an eagle to top the leaderboard.

“I played some really great golf today, it was very humid, however, I made sure I hit every fairway on each hole. When you are in the fairway, the greens are a lot bigger”, said Whitney.

Friday’s second round is set up to be an intriguing one, with seven golfers closing in on the leaders at six under par.

BMW Jamaica Classic tees off on Thursday in Montego Bay