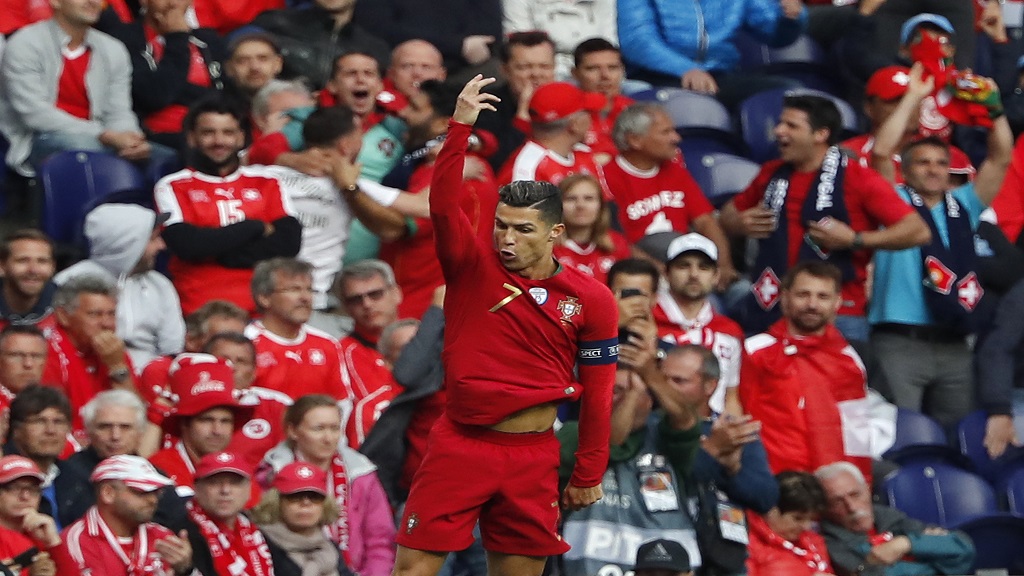 Portugal's Cristiano Ronaldo celebrates after scoring the first of his three goals during the UEFA Nations League semifinal football match against Switzerland at the Dragao stadium in Porto, Portugal, Wednesday, June 5, 2019.

On a night when Portugal unveiled their newest star, it was the same old Cristiano Ronaldo who came through for the national team again.

Teenager Joao Felix, who has been called Ronaldo's successor, made his international debut on Wednesday, but it was Ronaldo who scored the hat trick that gave Portugal a 3-1 win over Switzerland and a spot in the final of the inaugural Nations League.

While the 19-year-old Felix wasn't much of a factor, Ronaldo proved decisive again, converting a first-half free kick and netting two late goals that gave the hosts a chance of winning UEFA's newest competition.

"It's one of those things you don't have enough adjectives to describe," Portugal coach Fernando Santos said. "He's a genius."

Portugal and Ronaldo will play either the Netherlands or England, which meet in the other semifinal on Thursday in Guimaraes. Switzerland will face that game's loser in the third-place game, also on Sunday.

Ronaldo's late double also helped erase the controversy surrounding Switzerland's second-half equalizer by Ricardo Rodriguez. It came from a highly disputed penalty kick that was awarded after a video review, and which nullified a penalty that had been given to Portugal as play continued.

Portugal will be seeking their second international title after winning the 2016 European Championship with a team led by Ronaldo.

The star forward put Portugal ahead at the Estadio do Dragao with a well-taken free kick in the 25th minute. His shot dropped quickly after going over the wall, catching Swiss goalkeeper Yann Sommer flat-footed.

When the game seemed headed to extra time, Ronaldo came through to put the hosts ahead again. He scored with a shot from inside the area after a nice pass by Bernardo Silva in the 88th, then completed his sixth international hat trick in the 90th, entering the area with the ball and cutting back inside before firing a shot into the far corner. It was his 88th goal for Portugal in 157 internationals.

"They have this 'cherry on top,'" Switzerland coach Vladimir Petkovic said about Ronaldo. "And he really made the difference."

Ronaldo had taken time off from the national team after last year's World Cup and hadn't yet played in the Nations League. It was only his third match with Portugal this year after returning to the squad for European Championship qualifiers.

Felix wasn't on the field anymore when Ronaldo came through with the late-game heroics. He had been substituted in the 70th.

The Benfica forward, who has been attracting the attention of some top clubs in Europe, had a golden chance to score his first goal with Portugal just before halftime, but he couldn't get a clean shot off after receiving a pass inside the area with only the goalkeeper to beat.

German referee Felix Brych didn't initially award the penalty for Switzerland after Steven Zuber was touched by Nelson Semedo inside the area, and as play continued he instead called one for Portugal when Silva was fouled in the other box.

After a long delay, Brych went to the VAR cabin and reversed the non-call for the first penalty, allowing Rodriguez to convert the spot kick in the 57th to even the score.

"I've never seen anything like that," Petkovic said. "It was a bit strange because the penalty wasn't that clear. The way it was handled wasn't entirely clear."

Portugal loudly complained as the contact between Semedo and Zuber appeared to be incidental.

Brych was also involved in a controversial penalty call in the match between Switzerland and Serbia at the World Cup last year.

It was the first time the VAR was used in a UEFA competition between national teams.

Before the game, a moment of silence was observed in honor of former UEFA president Lennart Johansson, who died Wednesday at age 89.

Mourinho killed everyone at Real Madrid, even Ronaldo - Adebayor