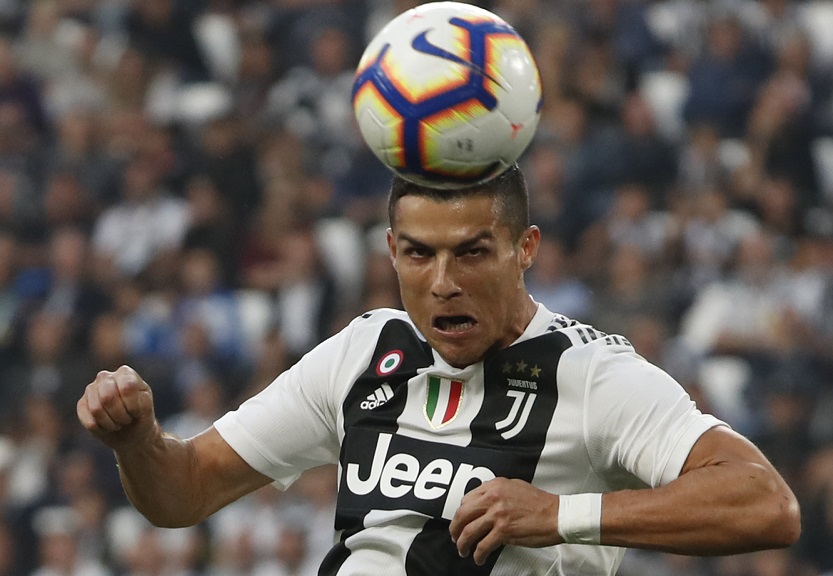 Juventus' Cristiano Ronaldo heads the ball to hit the post during an Italian Serie A football match against Genoa, at the Alliance stadium in Turin, Italy, Saturday, Oct. 20, 2018.

It wasn't enough on Saturday to maintain Juventus' perfect start to the season.

Ronaldo, who has been accused of rape in a civil lawsuit in the United States, scored in the 1-1 draw against Genoa. It was his fifth Serie A goal in nine matches.

Ronaldo has 311 goals in La Liga for Real Madrid, and 84 in the English Premier League for Manchester United.

Juventus won all of its previous 10 matches across Serie A and the Champions League. Though Juve's lead in Italy was cut to four points after Napoli won at Udinese 3-0, coach Massimiliano Allegri believed this result would help his side for arguably its toughest test yet, Manchester United on Tuesday in Ronaldo's return to Old Trafford.

"We drifted out of the game after a good start to the second half and, instead of making it 2-0, we let them make it 1-1," Allegri said. "This isn't good, because it's with matches like this that titles are lost. After 10 minutes of the second half we were already thinking about Manchester. We needed to have more focus.

"But it's a draw that serves us well. It'll get our feet back to earth and help us understand that, to win matches, you need sacrifice and hard work."

Ronaldo had last weekend off while Juventus was idle during the international break. Normally the star of his national team, he was left off Portugal's squad.

Less than 20 minutes in on Saturday, he scored. There was a miscommunication between Genoa goalkeeper Ionut Radu and his defender on Joao Cancelo's cross from the left, allowing Ronaldo a simple tap-in at the far post.

Genoa's first goal at Juventus since January 2013 came from Daniel Bessa with a header in the 67th minute.

It was a memorable first match back in charge for Ivan Juric, who returned to Genoa for his third spell as coach.

The substitutes made the difference at Udinese.

Fabian Ruiz replaced the injured Simone Verdi in the opening minutes and the midfielder scored his first Napoli goal in the 13th, curling a stunning 20-yard strike into the top right corner.

There was still time for Marko Rog to score, just 40 seconds after coming off the bench.

Napoli visits Paris Saint-Germain in the Champions League on Wednesday.

Roma fell to a surprise 2-0 defeat at home to 10-man Spal, which won at the Stadio Olimpico for the first time in Serie A in 53 years.

Roma went into the international break with four straight wins in all competitions while Spal had lost its last four.

However, the visitors took the lead shortly before halftime when Andrea Petagna converted a penalty after Manuel Lazzari was fouled by Luca Pellegrini.

Spal doubled its advantage 11 minutes after the break as Kevin Bonifazi headed in a corner at the near post.

Spal goalkeeper Vanja Milinkovic-Savic — the younger brother of Lazio midfielder Sergej — did brilliantly to fingertip Pellegrini's effort onto the bar but swiftly went from hero to villain.

Milinkovic-Savic was booked for time-wasting and he received a second yellow card seconds later for petulantly throwing the ball away, leaving Spal with 10 men for the final 15 minutes.

However, it clung on for its first win at Roma in the top flight since 1965.

Roma hosts CSKA Moscow in the Champions League on Tuesday.

Salah scores direct from corner but limps off in Egypt win