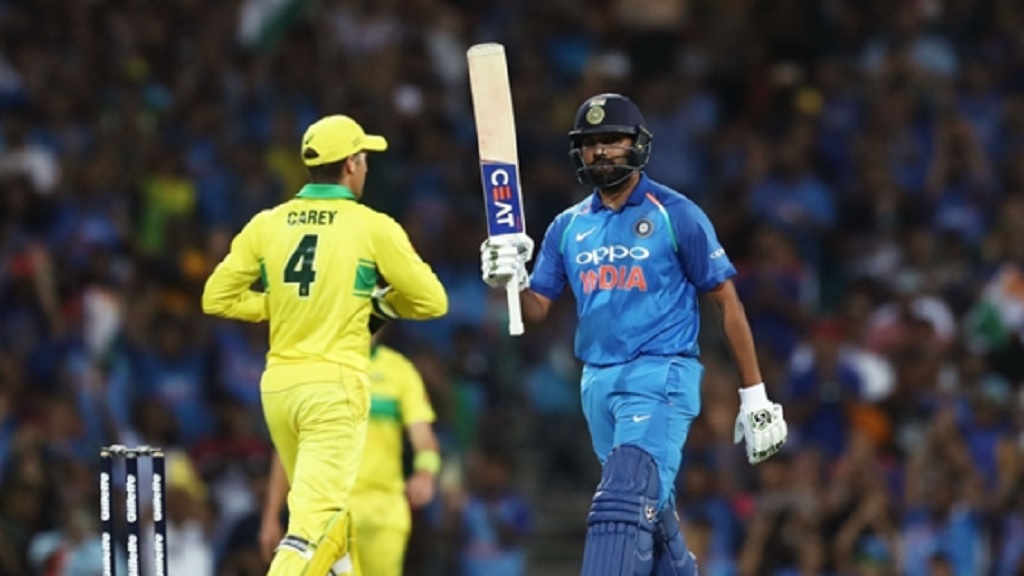 Rohit Sharma's century proved in vain as India suffered a 34-run loss to Australia, who became the first team to register 1,000 wins in international cricket in the first ODI at the SCG on Saturday.

The India opener blasted a stunning 133 off 129 deliveries as the tourists chased a seemingly achievable target of 289 on a slow pitch for victory to follow up their 2-1 triumph in the four-match Test series.

Debutant Jason Behrendorff (2-39) and newcomer Jhye Richardson (4-26) had the tourists in trouble at 4-3 inside four overs, but MS Dhoni – who became the fifth batsman to reach 10,000 runs for India – and Rohit got them back on track with a 137-run union.

However, Ambati Rayudu (0) wasted a review that would have saved Dhoni had it been available, and India were unable to recover despite Rohit's best efforts.

Australia lost captain Aaron Finch (6) early when he was bowled through the gate by Bhuvneshwar Kumar (2-66), while Alex Carey (24) looked good before cutting Kuldeep Yadav (2-54) to Rohit at first slip to leave the hosts at 41-2.

Usman Khawaja (59) and Shaun Marsh (54) steadied the ship for the hosts, but it came at the expense of runs – their stand of 92 for the third wicket came from 111 deliveries.

Peter Handscomb (73 off 61 balls) and Marcus Stoinis (47 not out) – brought in ahead of Glenn Maxwell (11no) – picked up the pace as India struggled at the death in the absence of the rested Jasprit Bumrah, their final 10 overs went for 93 runs.

The hosts wasted a review on the fifth ball but Behrendorff had his maiden ODI wicket off the next deliver with Shikhar Dhawan going for a duck leg before.

Richardson struck twice in three deliveries to add Rayudu to the scalp of Virat Kohli (3), a poor review from the former meaning Dhoni had no option but to walk after being trapped lbw to a ball that replays showed pitched outside leg.

The former skipper and Rohit had stabilised the innings, but like Khawaja and Marsh they scored at a slow rate – their 137-run union came from 172 balls.

Rohit injected some urgency with three fours off one Peter Siddle over en route to his fourth ODI ton in Australia – more than any other batsman has managed against the team on their own soil – but Dinesh Karthik (12) and Jadeja (8) were unable to provide support.

A thunderous six into the second tier beyond deep midwicket saw Rohit keep up the threat of a late surge from India, but when he heaved Stoinis (2-66) to Maxwell the jig was up for the tourists.

India set to make history despite rainy day in Sydney