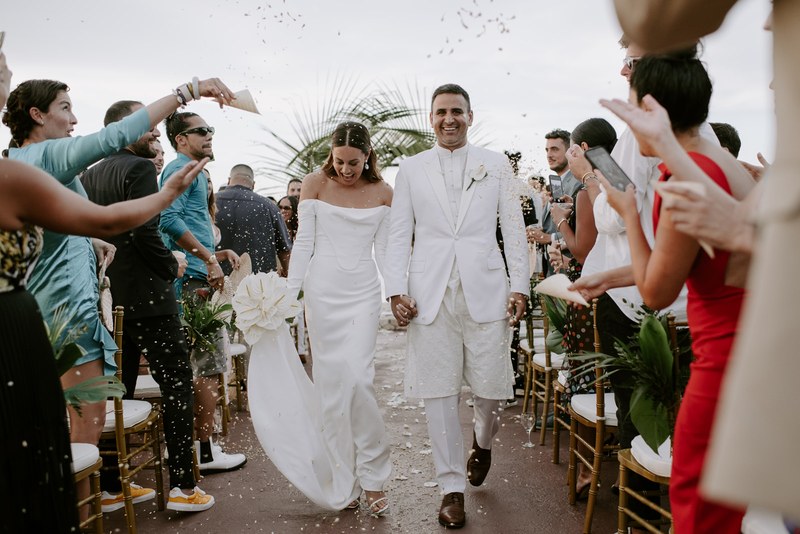 When the Loop Lifestyle team saw the headline “The Bride Wore Alexander Wang — and 5 Other Looks — at This “Island Formal” Wedding at The Rockhouse in Jamaica”, we simply couldn’t ignore for a number of reasons.

We love weddings, fabulous dresses, a beautiful love story, Alexander Wang, and we love Jamrock – it was inevitable!

Director David Laven and creative producer Lauren Levinger exchanged vows at Rockhouse Negril in the company of family and friends, which included fashion designer Alexander Wang — a longtime friend of Levinger, who also designed the strapless white dress she wore to the oceanfront wedding.

The couple both have traditionally religious upbringings, but the Rockhouse Hotel charm made for a compelling "non-denominational service".

Vogue writer Alexandra Macon surmised it beautifully in her article The bride who wore Alexander Wang and five other looks to a tropical wedding at Rockhouse in Negril.

"David and Lauren’s fathers are both Jewish, David’s mother is Indian and Hindu, and Lauren’s mother is Chamorro, Catholic and from Guam, so the couple worked to make the ceremony a multi-faith, non-denominational service".

Religion aside, the decision to get married in Jamaica was serendipitous — the couple felt an amplified, unavoidable bond when on The Rock.

“Our love is at its best when we’re in Jamaica, it just is — I don’t know how else to explain it.”

In the same way we were swept away by their love story, David and Lauren fell in love with Jamaica. “The couple visited Jamaica when they looked for a venue the first time around, and immediately fell in love with The Rockhouse… “From the food to the people to the overall vibe, it was just sort of a magical experience where I felt our love was really nurtured by the environment,” David says. “Our love is at its best when we’re in Jamaica, it just is—I don’t know how else to explain it.”

The article also acknowledged the work of Alecia “Lici” Eastwood and Shanique Montague from The Rockhouse in planning "every aspect of the wedding weekend".

Entertainment was provided by the Silver Birds Steel Orchestra.