It’s something like a modern-day chuckwalla, strolling in sand dunes on an island in what now is the Grand Canyon region.

That’s how Steve Rowland, professor emeritus of geology at the University of Nevada, Las Vegas, and his fellow researchers interpret fossil footprints that were revealed in a rockfall near a popular Grand Canyon hiking trail.

At that age, they’d be among the oldest tracks of animals that lay eggs with a protective hard or leathery shell and the earliest evidence of vertebrate animals walking distinctively in sand dunes.

This, according to Rowland, Mario Caputo and Zachary Jensen, who wrote in a research paper published this month.

‘I think our interpretations will hold up very well,’ Rowland said Monday.

Not everyone is convinced the footprints were created by a single, four-legged animal that has a lateral-sequence walk, where the legs on one side of the body move in succession, followed by the legs on the other side.

Or, that the footprints mark the point in evolution where animals were able to lay eggs with protective shells outside water.

‘Some of the conclusions likely are going to be controversial,’ he said.

‘There’s a lot of disagreement in the scientific community about interpreting tracks, interpreting the age of rocks, especially interpreting what kind of animal made these tracks.’

Rowland first heard about the footprints from a Norwegian geology professor, Allan Krill, who was hiking at the Grand Canyon in 2016 with his students and sent Rowland a photo.

Rowland made out claw marks common among reptiles in the 28 footprints, which he said help tease out the scarce skeletal record.

Some of the earliest bones of similar animals that lay eggs outside the water were found in Nova Scotia around the same time the creatures would have been in what’s now northern Arizona, Rowland said.

‘You could always learn more, and we certainly would like to find more tracks of those same animals,’ he said. 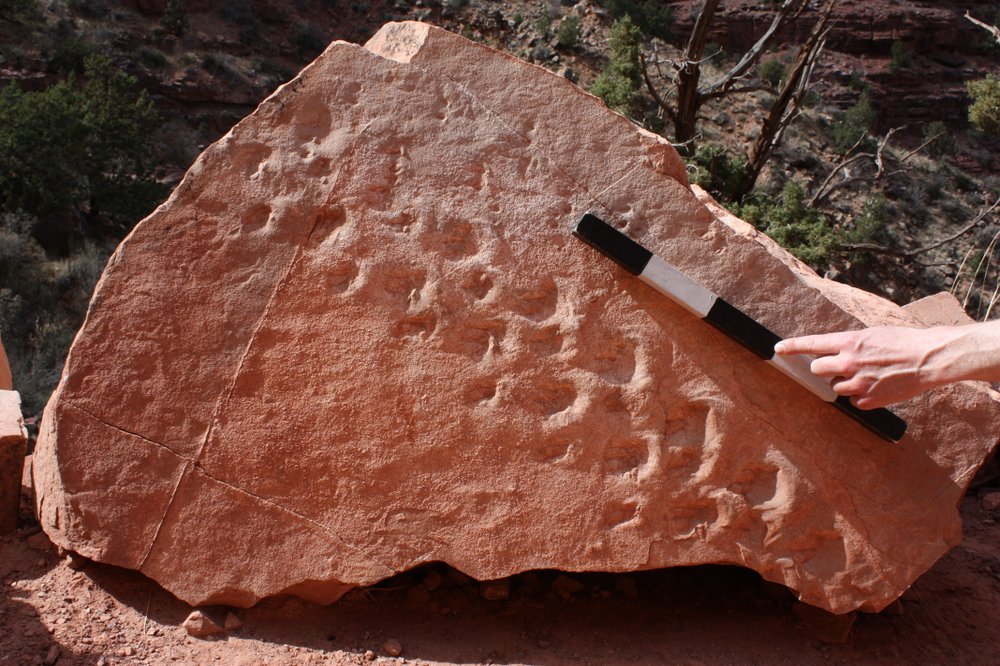 This photo provided by Steve Rowland shows fossil footprints on the face of a rock that fell near a popular hiking trail at Grand Canyon National Park in northern Arizona. Rowland, professor emeritus of geology at the University of Nevada, Las Vegas, estimates the footprints are 313 million years old, among the earliest found at the Grand Canyon. (Steve Rowland via AP)

The rock fell from the Manakacha Formation, made up of sandstone, limestone and mudstone that points to it being a onetime coastal plain when Arizona was near the western edge of the super continent, Pangaea. Dinosaurs weren’t around yet.

Officials at the Grand Canyon are trying to determine what to do with the rock.

It weighs hundreds of pounds and is in plain view along the Bright Angel Trail.

Another part of the rock also has footprints but wasn’t studied extensively.

The Grand Canyon has talked about creating a trail-side display or flying the rock out and into a museum, which would be costlier, Nebel said.

‘A lot of people walk by it and never see it,’ he said.

‘Scientists, we have trained eyes. Now that they know something’s there, it will draw more interest.’

Will Smith bungee jump is latest stunt near Grand Canyon