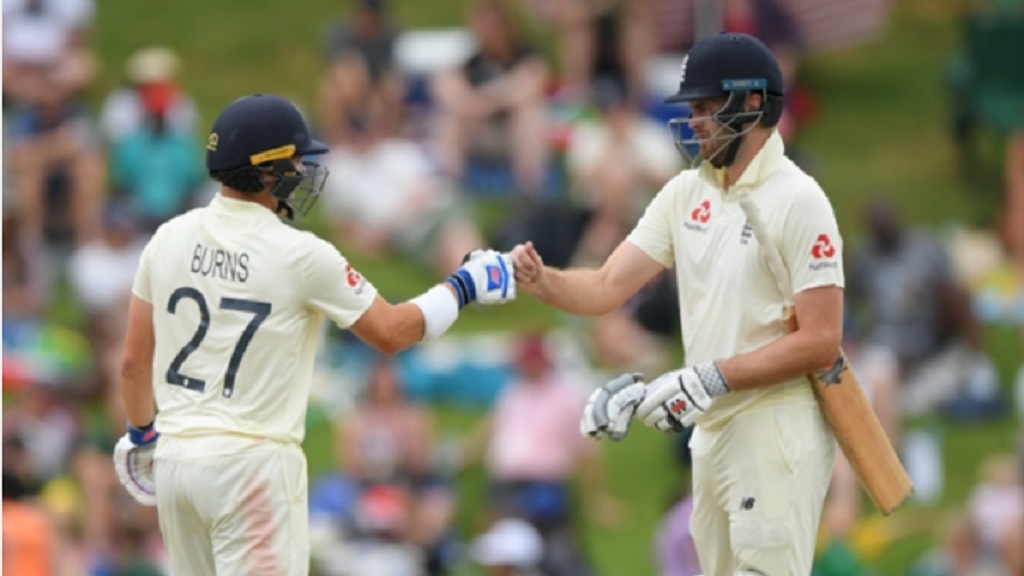 It appeared South Africa were nailed-on victors when they capitalised on some shoddy England bowling to make 272 all out in their second innings and set Joe Root's men an improbable target of 376 at Centurion.

If England do achieve the unlikely, it would be their record run-chase, surpassing the 359 against Australia at Headingley earlier this year.

The early signs were encouraging with Rory Burns and Dom Sibley digging deep - aided by a couple of moments of fortune - before the latter was dismissed late on day three as England closed on 121-1, requiring another 255 to take an early advantage in the four-match series.

Burns was the stand-out performer, reaching 77 not out at the close, and playing the dominant role in an opening partnership of 92 on a deteriorating pitch.

It could have been so different, however, had he not opted to review when given out leg before to Kagiso Rabada in the first over. Replays showed the ball would have been missing off-stump and he had another let-off when Rassie van der Dussen spilt a presentable chance in the slips off Vernon Philander.

After that he played near faultless cricket, combining stout defence and fluent shotmaking to frustrate a Proteas attack that lacked the spark they had earlier in the match.

The one breakthrough came when Sibley pushed a harmless delivery back to spinner Keshav Maharaj for 29 but the hosts could make no further inroads with Joe Denly unbeaten on six at stumps.

While no doubt pleased with their late resistance, England will rue a shambolic opening hour that, had it been avoided, would have meant a more manageable run chase.

They were not helped by captain Root spending as much time in quarantine in the England dressing room as he did out in the middle but that was no excuse for a torrid opening to the day that saw a couple of missed run-out opportunities, some sloppy outfielding and a verbal spat between senior bowler Stuart Broad and Root's deputy Ben Stokes.

Add in some woeful bowling with Broad and Jofra Archer, in particular, persisting with a short-pitched barrage that never looked likely to reap rewards and it was easy to see why England have appeared on a downward trajectory in the longest format for much of 2019.

Nightwatchman Anrich Nortje appeared comfortable - bar one moment when he required a review to overturn a decision that saw him given out off Sam Curran when the ball clipped his shoulder before being snaffled by stand-in wicketkeeper Jonny Bairstow.

He and Rassie van der Dussen put on 50 before the latter perished for a well-made 51, Archer finally pitching one up to produce a lbw call that was confirmed after a review.

Archer then snared Nortje two overs later before Stokes got in on the act to remove Dwain Pretorius.

Although the wickets were starting to tumble at one end, Quinton de Kock was looking menacing at the other with Archer coming in for some hammer from the South Africa wicketkeeper.

It therefore came as some relief to the tourists when Stokes induced a nibble from De Kock (34 from 37 balls) and Bairstow did the rest.

Vernon Philander continued to impress in the first Test of his final series with a belligerent 46 before he was the last man out as the South Africa innings was wrapped up for 272, Archer finishing with figures of 5-102.