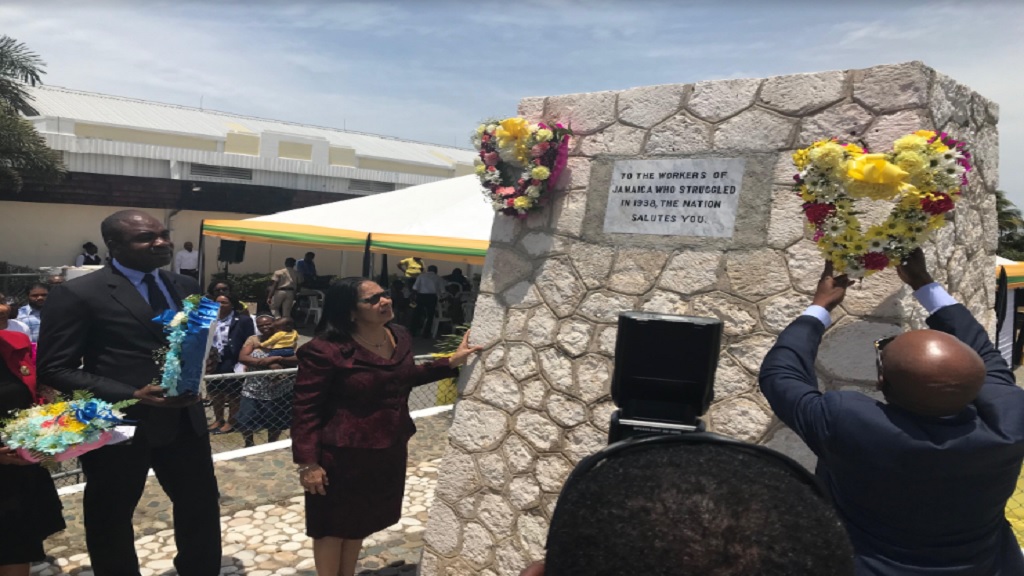 Minister of Labour and Social Security, Shahine Robinson, says while Jamaicans have made significant strides in creating a society where there is a balanced system that is facilitative of both workers and employers dedicated to fairness and justice in the workplace, there is more to be done in that direction.

The minister said as Jamaicans bask in the achievements of the past, "they must not ignore the future generation… our children”.

She added that “Our children’s safety is our responsibility. They are voiceless and hopeless if we do not offer them support in the protection of their rights.”

Robinson was speaking at a function on Tuesday to commemorate ‘Workers’ Week’ and do wreath laying at the Aggie Bernard Monument that is located at the Kingston Craft Market on the corner of Ocean Boulevard and Pechon Street in downtown Kingston.

“Today we truly honour those who sacrificed their lives pursuant to justice and equality for generations now and then. The consequence of the sacrifices they made was the turning point in our history.

“The events of 1938 saw the British Government demonstrating a mature approach in dealing with the abject poverty in a social and stratified society characterised by inequality and unfairness,” said the minister.

Other ministry officials said from May 19-23, Workers Week will be observed to pay tribute to Jamaican workers who participated in the 1938 Labour Riots, which led to improved working conditions for the workers of today.

Officials from the ministry said this year is particularly special as the ministry celebrates the centenary of the International Labour Organisation (ILO) and the Trades Union Act in Jamaica.

In keeping with the annual celebrations, the Ministry of Labour and Social Security was observing the week under the theme ‘Yes to Decent Work, No to Child Labour’.

Robinson expresses concern about extent of the informal workforce

The origins of Labour Day