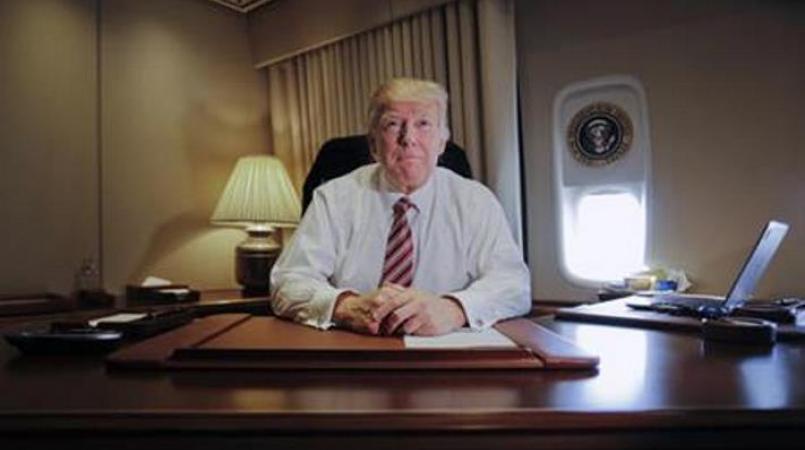 Lawmakers welcomed a speech from Trump endorsing their goals on repealing and replacing former President Barack Obama's health care law and overhauling the loophole-ridden tax code. But the president's comments on paying for the wall, and subsequent clarification and walk-backs from the White House, sowed widespread confusion Thursday.

After the White House press secretary announced a 20 percent border tax on imports from Mexico, House Republicans felt certain the administration was describing a central plank of their own tax plan — so-called border adjustment that taxes imports instead of exports. They argued it would more than pay for the wall and would end up with Mexico footing the bill in the end, as promised. But Senate Republicans, who are not sold on the House GOP tax plan, began to raise questions.

Then the White House began to walk the idea back, saying it was simply part of a menu of options.

"Many unanswered questions about proposed 'border adjustment' tax," the No. 2 Senate Republican, John Cornyn of Texas, said over Twitter. GOP Sen. Lindsey Graham of South Carolina said that "any policy proposal which drives up costs of Corona, tequila or margaritas is a big-time bad idea."

The confusion underscored the tricky currents ahead as the GOP aims to repeal and begin to replace "Obamacare" by March and complete action on taxes by summer's end — all while paying for the border wall and other spending proposals, writing an infrastructure bill and taking must-do action to raise the government's borrowing limit.

"It's obvious we have an awful lot of work to be done," said Sen. Susan Collins, R-Maine. "There's not necessarily consensus on it, but there is a sense of excitement about it."

Amid their two-day retreat in Philadelphia, Republicans sought to fall in line behind their new president even if it meant abandoning long-held GOP principles.

House Speaker Paul Ryan of Wisconsin and Senate Majority Leader Mitch McConnell of Kentucky announced that Congress would take steps to pay the $12 billion to $15 billion for the border wall without committing that the money would not be added to the deficit. It was a marked turnaround from the GOP's traditional opposition to deficit spending.

Lawmakers praised Trump for his use of executive orders for the wall and other issues, something they criticized bitterly when it was coming from Obama.

And even as Trump continued to stoke controversy, Republicans increasingly said they could live with his erratic approach, and some were even coming around to the view that it was helpful.

During his presentation Trump said he was with the GOP on its aggressive agenda on health care and taxes, welcome words to Republicans. Many were pleased that in his 20-minute remarks Trump stayed mostly on the script shown on his teleprompter and did not veer into the false allegations about massive voter fraud and inaugural crowd size that have raised controversy.

"I think a lot of people in the room feel calm when we see teleprompters in front of him," said GOP Rep. Dan Donovan of New York. "You have to love the man, though. He speaks his mind."

Yet it was clear that Trump would have his detractors. Sen. John McCain of Arizona told reporters that he was not sold on paying for the border wall, and the former prisoner of war passionately denounced Trump's new suggestions that torture works and that enhanced interrogation techniques and black CIA sites should be renewed.

FEATURED IMAGE CAPTION: President Donald Trump sits at his deks on Air Force One upon his arrival at Andrews Air Force Base, Md., Thursday, Jan 26, 2017.