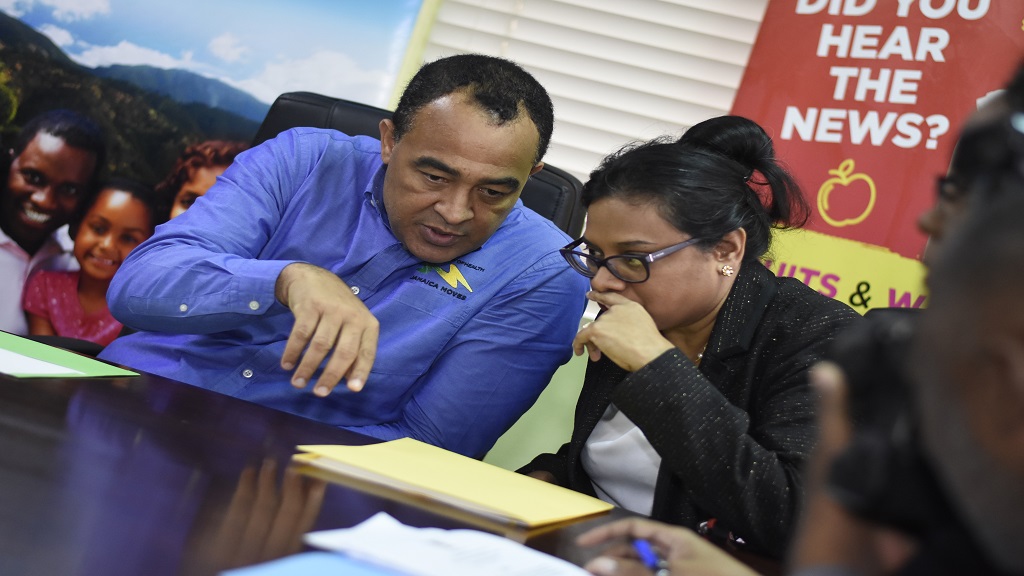 Health Minister, Dr Christopher Tufton, and Chief Medical Officer, Dr Jacquiline Bisasor-McKenzie, in a discussion at a recent press conference on the subject of dengue fever.

The Caribbean Public Health Agency (CARPHA) has told health officials across the region to prepare for the possibility of a severe outbreak of the mosquito-borne dengue fever.

The move follows a warning that was issued by CARPHA in May of last year.

In a statement on Thursday, CARPHA noted that the last major regional outbreak of dengue occurred in 2009.

“Since then, the region has experienced two large outbreaks of mosquito-borne diseases, Chikungunya in 2014 and Zika in 2016, which are unlikely to reoccur soon,” the regional body said.

CARPHA added that “disease modelling predicts that another regional outbreak of dengue may occur in the near future.”

The agency said in 2018, Latin America showed an increase in the number of dengue cases.

The regional body also pointed to the ongoing outbreak of dengue in Jamaica, saying that it has elevated the level of concern in other Caribbean islands.

Dengue is a flu-like illness that affects infants, young children and adults. The symptoms typically begin four to 10 days after infection, and include a high fever, headache, vomiting, muscle and joint pains, and a characteristic skin rash.

The illness can evolve to severe dengue, characterised by potentially deadly complications, such as internal haemorrhaging, intense and continuous abdominal pain, or tenderness and persistent vomiting. In some cases, dengue may be severe and can cause death, which has recently occurred in Jamaica.

Dengue and other mosquito-borne diseases threaten health, tourism, social and economic development, and a collaborative effort is normally required to reduce the spread of disease within a society.

Dengue remains a global health problem and like Zika and Chikungunya, there is no specific treatment for the disease.

The Aedes aegypti mosquito vector, which spreads dengue, is said to be present in all Caribbean territories.

The measures used to control the spread of dengue are the same as those for Zika and Chikungunya, as these diseases are also transmitted by the Aedes aegypti mosquito.

With the arrival of the rainy season within a few months, mosquito control and awareness activities will need to be intensified. Caribbean ministries of health have been advised to increase health promotion messages to prevent mosquitos biting and breeding; combine efforts with communities to eliminate mosquito breeding sites; intensify vector surveillance and control; and disseminate appropriate clinical care and treatment guidelines.

CARPHA said the most effective way to avoid becoming ill from viruses spread by mosquitoes is to prevent mosquito bites.

Jamaica declared a dengue outbreak on January 3. Up to that point, the country had recorded some 830 presumed or suspected cases, 23 of which were confirmed. More than eight deaths are suspected to have occurred as a result of the disease so far, with some being already confirmed as such.