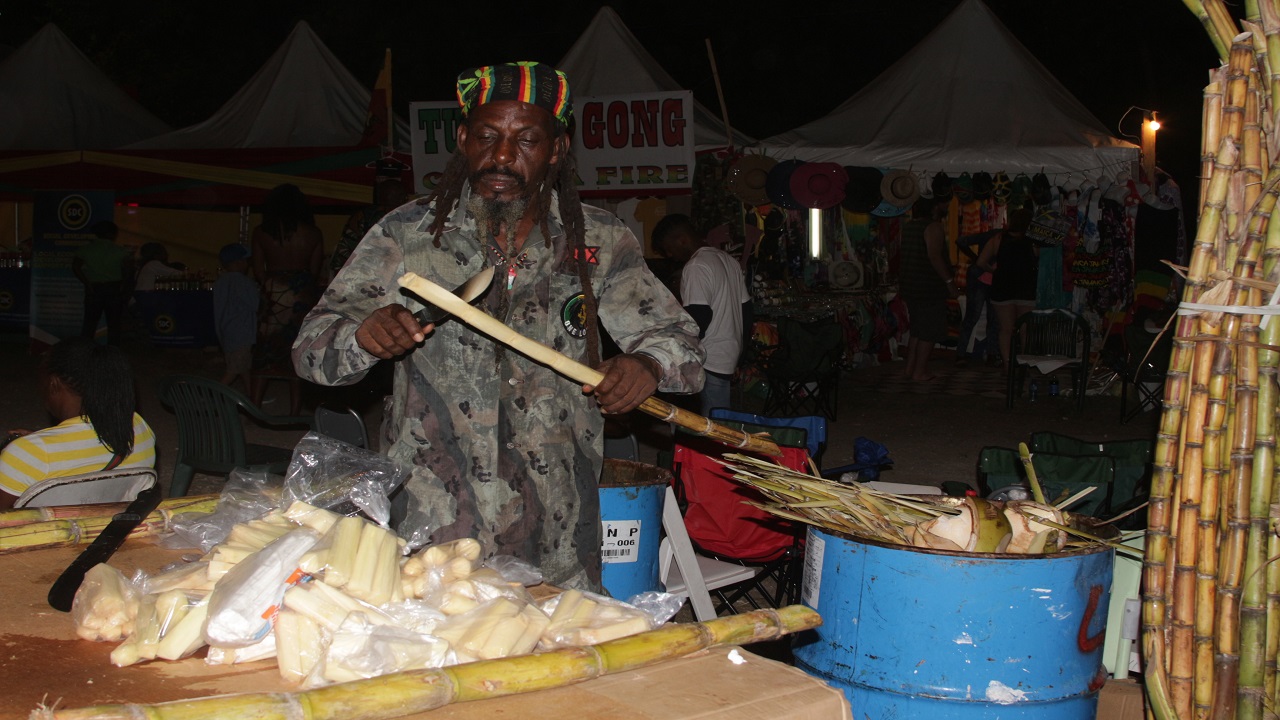 Jonathan Thomas, also known as Israel, a cane and peanut vendor, was satisfied with his returns at Reggae Sumfest. (Photos: Marlon Reid)

Vendors at Reggae Sumfest cashed in on the massive turnout at the music festival over the weekend.

The offerings at Catherine Hall in Montego Bay were varied, with collectibles, food and beverages, chairs and fruits on sale among other items that patrons at the venue had the opportunity to purchase.

And, according to the business operators, they had nothing to complain about in terms of seeing a return on their investments.

“Mi mek a money everytime and mi will never stop duh this man as long as Sumfest a gwaan,” the Rastafarian vendor added.

For man who goes by the name ‘Bongo Rock’, his natural food restaurant provided a well-needed avenue for vegetarians. He said he has been at Sumfest for all of its 25 years and this year has been one of his better years.

He said, “mi deh a Sumfest from it start. This year is a little better year as suh far things a gwaan good. It is what yuh prepare still, as mi nuh deal wid cow, and goat, and hog, and fowl.

“It is vegetable and just natural that mi deal wid. Yuh have some people who come out, weh (just want) natural, so dem will look fi di natural place and when dem find di natural place dem will support it,” Bongo said, explaining that he only invests in “ital livity”.

Meanwhile, there was a Social Development Commission-organised tent at the event that facilitated the sale of about 12 different products from the communities of Flankers, Irwin, Maroon Town, Cambridge, Stone Age, Catadupa and Granville, all in St James.

Sharona Drummond, the community relations officer for the Maroon Town division of the SDC, believes the venture was good for the participants.

Drummond said, “people have been coming. It had been a bit slow when we just started but it picked up and they are making a profit and they are also getting information (about where they can get their products sold).”

Some of the things that were on sale at the tent were jewelry made from local materials, organic soaps and gift items.

According to Drummond, the initiative was part of the SDC’s objective of building better communities.

She said, “Jamaica is trying to be more business-minded. We have taken on this initiative to community members and individuals to enhance their local products and ideas, to improve them and to further build them and their communities.”