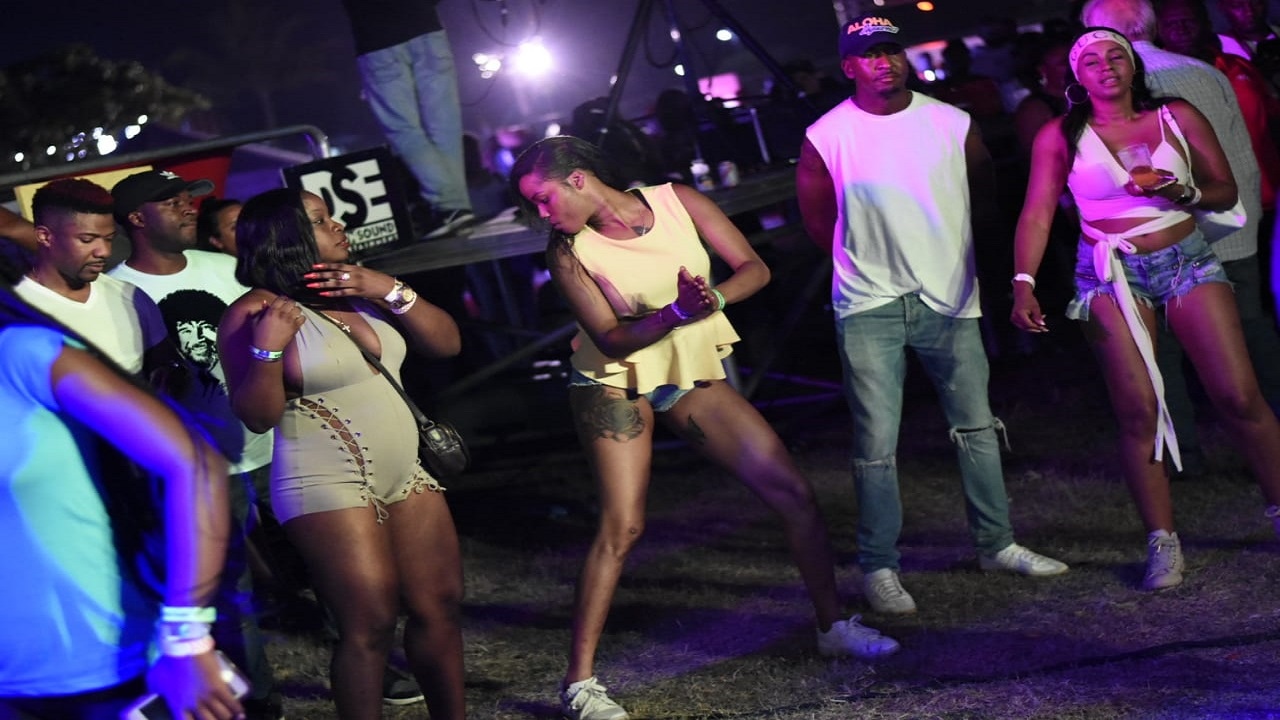 A patron (centre) catches the attention of our lens with her dance display during last year's Reggae Sumfest sound clash. This year's staging of the event, part of the Sumfest festivities, will be held on Thursday.

The official proceeding began last Friday with a symposium at the Mona Visitors Lodge in St Andrew and continued on Sunday with a Mawnin Meds shindig at the Tropical Bliss Beach in Montego Bay, St James. Mawnin Medz featured performances from Skinny Fabulous and Stylo G and music by DJ Crazy Neil, DJ Courtney, DJ Jigga and Antsman.

On Monday, the Old Hospital Park located along the 'Hip Strip' was the venue for the festival's 'Street Dance', where Sky Juice, Foota Hype, Team Shella and C Note handled the DJ duties.

There was also the All White party at Pier I on Tuesday and the Blitz All Black in celebration of the birthday of Bunji Garlin at the Hard Rock cafe on Wednesday.

The heat will be turned up a bit on Thursday when the Global Sound Clash gets underway. The event will top international sound systems facing off for top honours in what has become a highly anticipated event for the lovers of the sound clash.

Ricky Trooper and Pink Panther will represent Jamaica while Warrior Sound of Germany; King Turbo from Canada; and Yard Beat from Japan complete the roster.

But perhaps the most anticipated and well attended parts of the festival will be the two nights that will feature live performances.

No doubt the inclusion of the mercurial Buju Banton in the line up will be a major drawing card and, if he continues in his rich vein of form since his release from prison, then patrons should be in for a treat on Festival Night Two.

Beres Hammond always delivers and another exhilarating set is expected from the veteran crooner.

Much is also expected of the third man who the festival was billed around, Chronixx, who has matured nicely into one of reggae’s leading lights and has hits to keep an audience moving.

But the Reggae Sumfest BBC trio will not a festival make and the promoters have wisely included other acts of note who should provide a great spectacle of entertainment should they appear in top form.

This will be the first major performance on local soil by winner of the UK-based X-Factor, Dalton Harris and patrons must be waiting to hear the golden-voiced singer strut his stuff.

Golden girl of the moment, Koffee, is a late addition to the line up and has attracted a throng of fans since she burst on the scene months ago.

Protoje is also one who is expected to bring a level of sobriety to the event as should Etana and Romain Virgo.

Dexta Daps is hugely popular with the ladies and he also should ignite.

Reggae Sumfest seems all set to carry on its long held tradition of being one of the world’s top music festivals and at present only one of two major reggae-based events held on local soil.