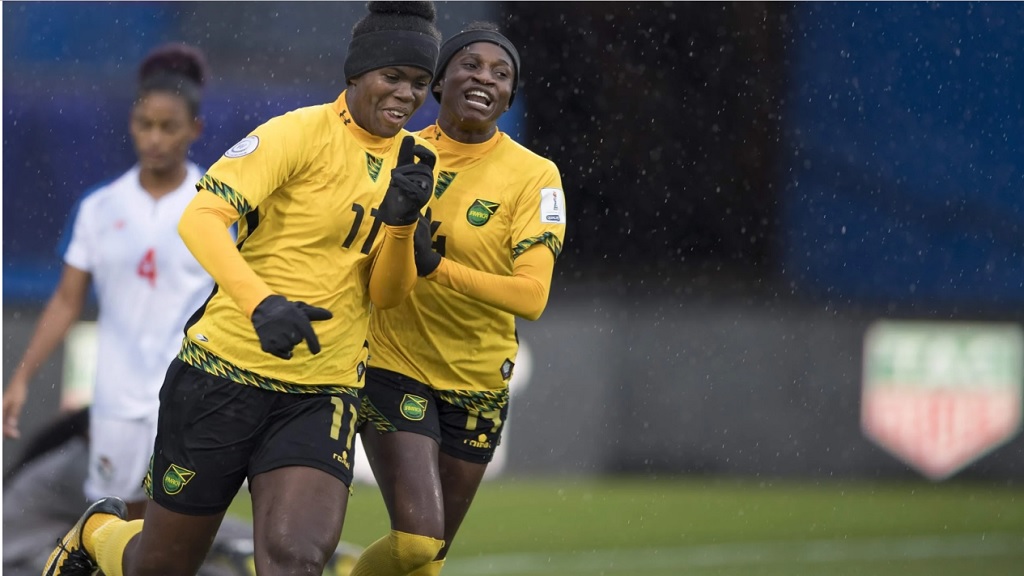 Star player, forward Khadija Shaw (left) was on BBC World Service on Tuesday, September 9, 2019, speaking about the dispute between the Reggae Girlz and the Jamaica Football Federation (JFF), over outstanding salaries.

The dispute between the Reggae Girlz and the Jamaica Football Federation (JFF) over salaries owed to the Girlz following their historic qualification for, and participation in, the FIFA Women’s World Cup in France in June, has hit the international media.

The Girlz, seemingly led by star player, forward Khadija Shaw, are refusing to train or play for Jamaica until they are paid monies they were promised.

Several of them have said so in their social media postings.

In an Instagram post Shaw said: “I choose not to represent Jamaica in any future tournaments due to the fact that I haven’t been paid what we were promised by legal agreement. Until then no play”.

One of the social media posts by Khadijah Shaw.

Shaw also posted on Instagram that the refusal to play or train was "about more than just money".

On Tuesday, Shaw spoke with BBC World Service about the decision taken by the Girlz. She confirmed that they were refusing to play but said she was optimistic that the matter will be resolved quickly.

"We are in a position where we are literally fighting just to get paid by legal agreements.

"[This is] about change, change in the way women’s football is viewed, especially in Jamaica,” said Shaw.

"We deserve more and they can do better. For this reason, I, along with my team-mates, won't be participating in any future tournaments until being paid," she added.

"As athletes, we play the game wholeheartedly and with commitment. The monetary incentives can be small and are often not a reflection of the time and dedication we put into our sport.

"We fought for change and became the first Jamaican women's football team to sign contracts with our federation.

"These contracts symbolise the respect we deserve and intend to receive. For this reason, I along with my team-mates, will not be participating in any games or training sessions until the contract has been fulfilled."

When contacted on Tuesday, General Secretary of the JFF, Dalton Wint said: “We have communicated with the players on the matter of their outstanding payments. We made payments to these players late last week. Unfortunately, the money did not hit their accounts at the time when they were making these utterances if these (utterances) came directly from them.”

Wint said it was unfortunate that the matter was being played out publicly because the JFF has made efforts to keep its side of the bargain.

“So it’s unfortunate that this situation has gotten out of hand,” he said.

Wint told Loop News that the JFF had made a commitment to the Girlz to pay 50 per cent of the money to their account and that all outstanding liabilities would be cleared up before, or by the end of September.

He said the JFF has a commitment from FIFA that the funds will be made available by latest the end of the month.

But, Wint said the JFF would be trying to find ways to pay the money before that time.

He explained that a qualifying bonus of US$480,000 (Ja$62.4 million) was paid to the JFF to help prepare the team for the World Cup. Among other things, that money was spent on practice games.

“After participating in the World Cup, each team gets a minimum of US$750,000 (Ja$97.5 million). That is the money we are talking about that will be paid on, or before the end of September,” Wint said.

The money will be used to pay a bonus to the Girlz as well as their outstanding remuneration.

Meanwhile, Wint lamented that the public utterances by the Girlz will only serve to make it harder for the JFF to raise funds from potential sponsors.

“The current climate is not conducive to raising funds if we continue to wash our dirty linen in public,” said Wint.

“As a result, we were expecting that if we have issues like these they would be dealt with internally,” the general secretary added.

The Reggae Girlz had a very poor FIFA Women's World Cup campaign, bowing out of the tournament without a points from their three group matches.

Following the Women's World Cup, the Girlz went to the Pan American Games in Lima, Peru and also crased out without a point following the preliminary round stage.

The Girlz raked up a seven-game losing streak, starting with a 3-2 loss against Scotland in the United Kingdon on May 28, before ending that poor form with a 1-0 victory over host nation Peru on August 6 to secure a seventh-place finish at the  Pan American Games.