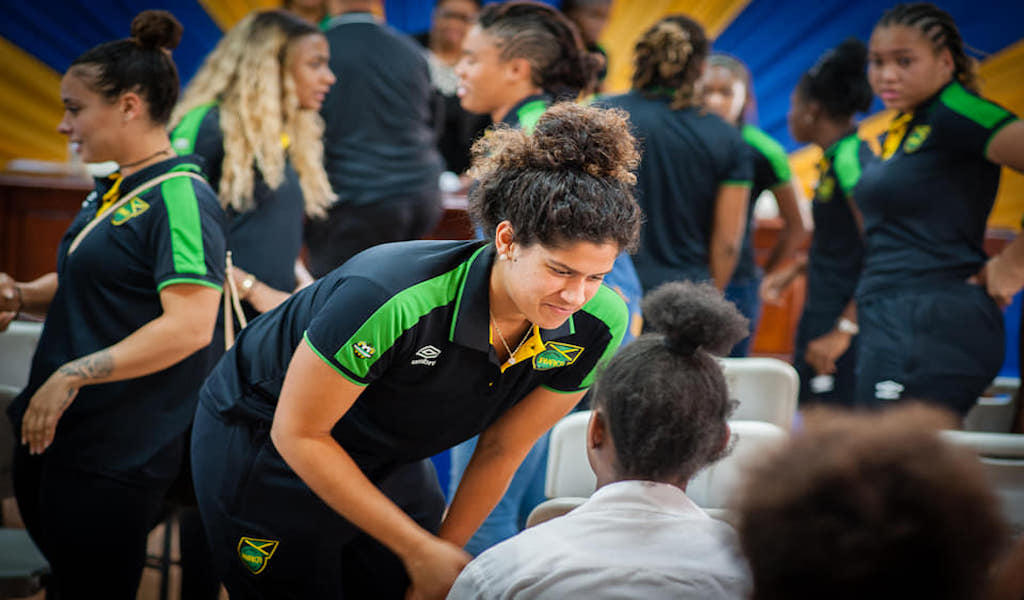 Jamaica national team member Marlo Sweatman talks to a girl during one of the series of activities organised by Government for the Reggae Girlz.

Members of Jamaica’s national women’s football team, the Reggae Girlz, visited the Women’s Centre of Jamaica Foundation (WCJF) in St Andrew on Monday and interacted with the adolescent mothers at the Trafalgar Road-based facility while offering words of encouragement

The visit was part of a series of activities organised by the Government to celebrate the team’s historic qualification for the 2019 FIFA Women’s World Cup in France.

Minister of Culture, Gender, Entertainment and Sport, Olivia Grange, who was on hand, advised the teen mothers to use the achievement of the women’s football team to motivate and inspire themselves to pursue their own goals.

“The Reggae Girlz are a motivating force and offer a good message for you. (Qualifying for the World Cup) was not easy for them. Just the training and being disciplined to reach where they have reached (should be) an example to you that regardless of the challenges, you can achieve,” Grange said.

“You must also see yourself achieving and becoming as great as the Reggae Girlz in your own way, no matter what the challenges,” she added while urging the teens to cheer for the players in France.

Captain of the team, Konya Plummer, encouraged the adolescent mothers to keep believing in themselves and to trust in God, as well as to be strong and courageous.

“We teen mothers, along with all Jamaicans, are so proud of the team, and we can’t wait until 2019 to watch you play and dominate. This team of women has inspired us, young women, to work hard continuously, and to fight for what we want to achieve in life. We understand that we might face challenges and setbacks, but once we maintain a burning desire to excel, we can move mountains,” she said.

The team then applauded the adolescent mothers as a show of affirmation of their worth and value, and the teens returned the applause as a show of gratitude and to congratulate the footballers on their achievement.

The Reggae Girlz celebrations started on Saturday (December 15) with a civic ceremony in Montego Bay, St James, and a motorcade which started at GC Foster College in Spanish Town and travelled throughout the Corporate Area, followed by a concert at Emancipation Park on Sunday (December 16).

JFF President: The Girlz were determined to make the country proud