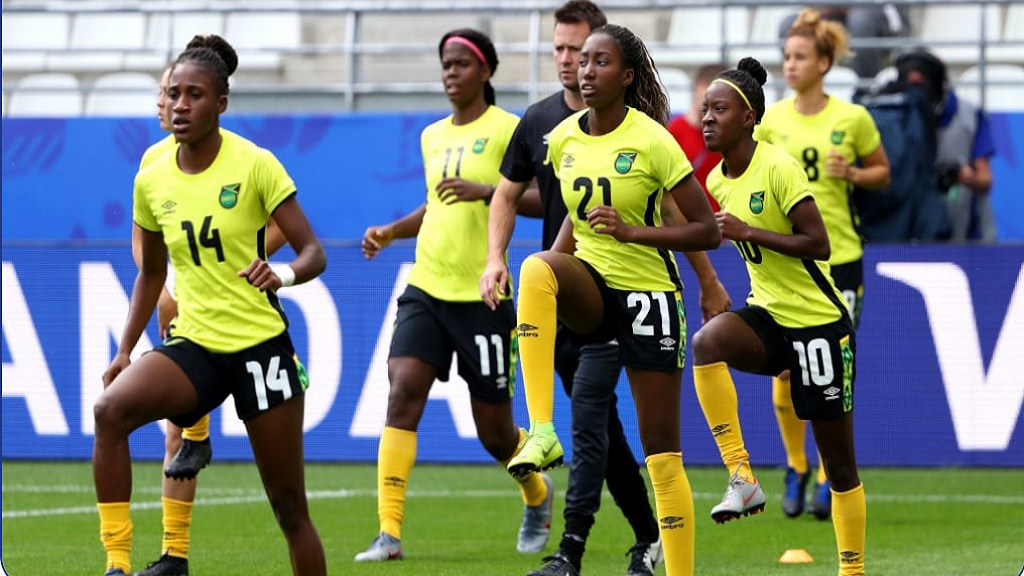 Jamaica's Reggae Girlz, with the odds heavily against them, will try to avoid another big defeat with the curtain all but certain to close on their historic debut appearance at the Women's World Cup on Tuesday.

The Reggae Girlz, ranked 53rd in the world, will take on sixth-ranked Australia at the Stade des Alpes in France, beginning at 9:00 pm (2:00 pm Jamaica time).

It’s one last hurrah for the Reggae Girlz. They are currently at the foot of Group C and will seek some points or even a goal in their encounter against Australia. So far, coach Hue Menzies has tried all but five players on his roster and seen his team concede eight goals in their two games, scoring none in reply.

Menzies, an English-born Jamaican-American former footballer, said the Reggae Girlz have been badly hurt by their inexperience.

After watching his team losing 3-0 against Brazil on June 9 and 5-0 against Italy on June 14, he will now try to find the right combination and strategy to eke out a solid performance against the Aussies, who are third in the group on three points - the same as second-place Brazil.

Following the 5-0 whipping against Italy, Menzies said: "Our inexperience showed. We went out there and gave up a cheap goal. I think it started from the first half with the penalty, it just bringing down the emotions of the players but hopefully we can learn from this. Hopefully, we can get more resources and play these types of games more often.

“Italy played with a lot of class, a lot of commitment and a lot of discipline. We need to take a page out of their book. They are a well-coached team so a lot of respect goes out to them."

The day will feature the last set of games in the group as the other two teams, Brazil and Italy, will face off in Valenciennes, also at 2pm Jamaica time.

Italy are already assured of a place in the last 16 with maximum six points but, aside from that, nothing is yet decided in the group. Brazil and Australia could still snatch top spot from Le Azzurre but, by the same token, neither are safe from elimination.

Even Jamaica, while resigned to heading home, are not assured of doing so. With Brazil and Australia still within reach on three points, the Jamaicans still have an outside chance of advancing to the Round of 16 by finishing second in the group or as one of the four best third-placed teams from the six groups.

The Jamaicans would have to beat Australia by at least eight clear goals and hope that Italy beat Brazil by a large margin for them to finish second in the group by goal difference. The Jamaicans can also hope that results in the other groups go their way to help then advance as one of the four best third placed teams from the six groups.

In any case, the prospect of winning their first-ever FIFA Women's World Cup point - or even netting a maiden goal - will be motivation enough for the Reggae Girlz. The impressive Italians, meanwhile, are aiming to further fortify their burgeoning reputation by maintaining an unblemished start to the tournament after beating Australia 2-1 and Jamaica 5-0.

Italy go into the last round of group matches already qualified and full of confidence. But they are also well aware of how different their route might be depending on their final position in Group C. After facing two very physical sides, the match against Brazil will test Le Azzurre's technical and tactical maturity in a different way as they play a team whose game is more similar to their own - with lots of technically skilled players who enjoy running with the ball.

While Milena Bertolini may rest a few players who have borne a heavy physical burden so far, expect a strong, fit and motivated Italy starting eleven

As frustrating as the 3-2 defeat to Australia was on June 13 after leading 2-0, Brazil showed themselves capable of going toe-to-toe with a title contender. Having digested what happened in Montpellier, the Brazilians have turned the page, with the mood in the camp confident and optimistic. That’s the kind of mentality needed for another challenging match. The squad will need to deal with Formiga's absence by being smart with the ball and avoiding simple mistakes.

Australia self-belief has been strengthened by that morale-boosting come-from-behind win over Brazil. A win of any description against Jamaica will take the Matildas into the last 16, while a resounding victory would boost their chances of finishing second or even first. With that in mind, it will be interesting to see how Ante Milicic tinkers with his tactics and starting side.