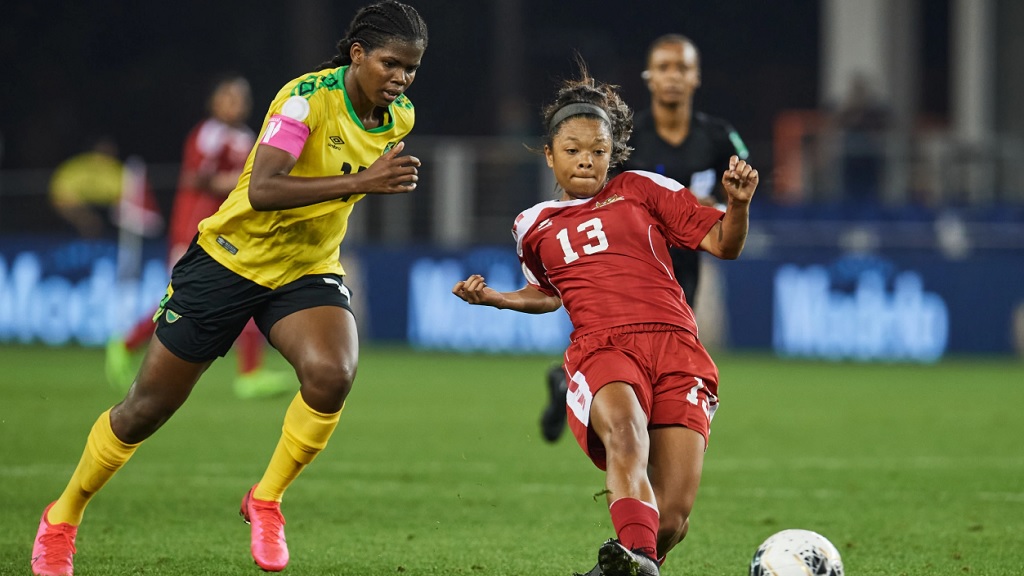 Khadija Shaw (left) scored a brace to help Jamaica end their 2020 Concacaf Women’s Olympic Qualifying Championship on a high note with a 7-0 win over Saint Kitts and Nevis on Tuesday, February 4, 2020 at H-E-B Park in Edinburg, Texas. (PHOTO: Concacaf.com).

Khadija Shaw and Kayla McCoy each scored a brace to help Jamaica end their 2020 Concacaf Women’s Olympic Qualifying Championship on a high note with a 7-0 win over Saint Kitts and Nevis in their Group B fixture on Tuesday night at HEB Park in Edinburg, Texas.

For Jamaica, it was a historic night as they earned their first-ever Concacaf Women’s Olympic Qualifying victory, which came four days after they suffered a humiliating 9-0 whipping against Canada.

That victory knocked the Reggae Girlz are out of contention for a spot in the Olympics this summer in Tokyo.

In order to qualify for the Olympics, the Reggae Girlz would have to make the final as the two finalists qualify.

The Reggae Girlz had lost their opening match 1-0 against Mexico.

Jamaica created history on October 17, 2018 in the United States by becoming the first Caribbean team to reach the FIFA Women's World Cup. They qualified for the World Cup via a penalty shootout win over Panama to finish third in Concacaf qualifying behind the U.S. and Canada.

on Tuesday night, Shaw’s thumping header in the 38th minute got Jamaica going with a 1-0 lead, and two minutes later the lead was doubled, 2-0, with a right-footed finish from Tiffany Cameron.

Havana Solaun increased it to 3-0 in the 51st minute when she slipped in a free-kick before Shaw had her second with a right-footed strike for a 4-0 lead in the 57th minute.

Trudi Carter’s penalty conversion in the 68th minute extended the lead to 6-0, followed by McCoy’s first in the 70th minute to make it 7-0.

Saint Kitts and Nevis goalkeeper Quinn Josiah was also providing some highlights, including a stop from a Shaw attempt on goal from point-blank range.

McCoy would then complete the evening with the seventh and final goal in the 85th to seal the three points for the Reggae Girlz.

Earlier, Canada scored twice in the first half to down Mexico 2-0 and earn a first-place finish in the group with a maximum nine points.  Canada finished second with six points, with Jamaica third with three and Saint Kitts and Nevis fourth and last without a point,

The semi-final matches are set to take place Friday, February 7, at the Dignity Health Sports Park, in Los Angeles, CA.

The first of the two semifinals, scheduled for 4:00 pm, will see Costa Rica (Group A runner-up) face off against two-time Olympic bronze medalists and Group B winners, Canada.

Later that day, Group A winner and current World Champions United States will take on Group B runner-up Mexico. The match is scheduled for 7:00 pm.

The two semifinal winners will qualify for the competitions final and the Women’s Olympic Football Tournament Tokyo 2020. The championship match, also to be played in Los Angeles, is scheduled for Sunday, February 9 at 3:00 pm.