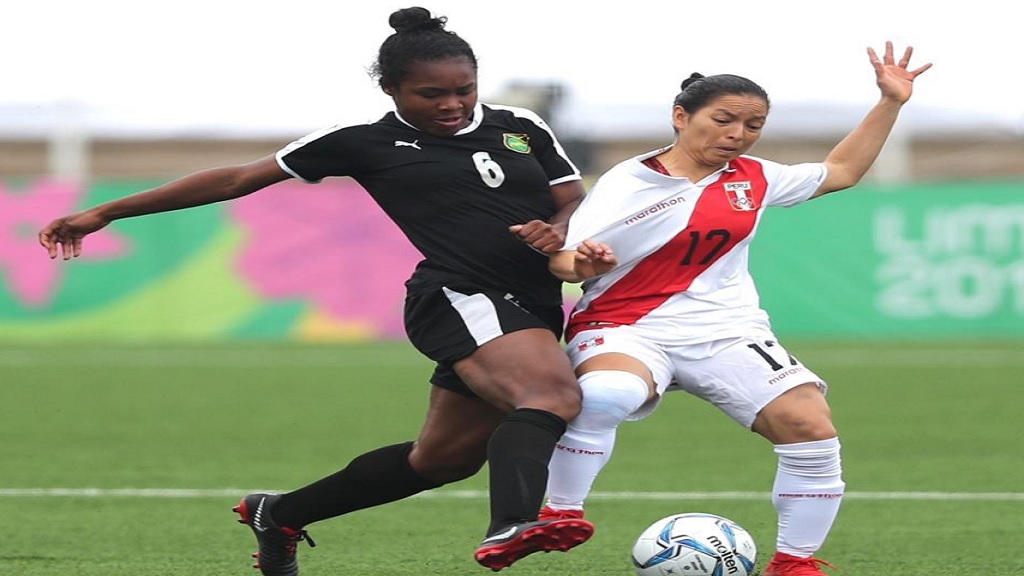 Mireya  Grey (left) of Jamaica challenges a defender from Peru during the 7th to 8th place match at the Pan American Games in Lima, Peru on August 6, 2019.

American-born Mireya  Grey scored the lone goal of the match, a 26th-minute strike which secured the only victory for the Reggae Girlz in Peru.

The Reggae Girlz had to battle for 7th to 8th place after finishing bottom of their group without a point having lost 3-1 against Group A winners Paraguay followed by consecutive 2-0 losses to Colombia and Mexico.

The victory ended the Reggae Girlz' losing streak. The Jamaicans entered the match with a record of seventh straight defeats, starting with their 3-2 loss against Scotland in the United Kingdon on May 28, just before travelling to France for their World Cup finals debut where they lost all three games.

Grey, a 20-year-old striker who attends the University of Washington, was a last-minute call up at the 2019 FIFA Women’s World Cup in France in July where the Reggae Girlz lost 3-0 to Brazil, 5-0 to Italy and 4-1 to Australia.

The victory came two days after Jamaica’s Under 23 team also secured their first victory at the Pan American Games. The Under-23 Reggae Boyz also got their victory against Peru, a 2-0 scoreline in their final Group B game.

Unlike the men's teams at the tournament, the women's teams are without age restrictions. Brazil is the defending gold medalist, but will not be participating in the Games.