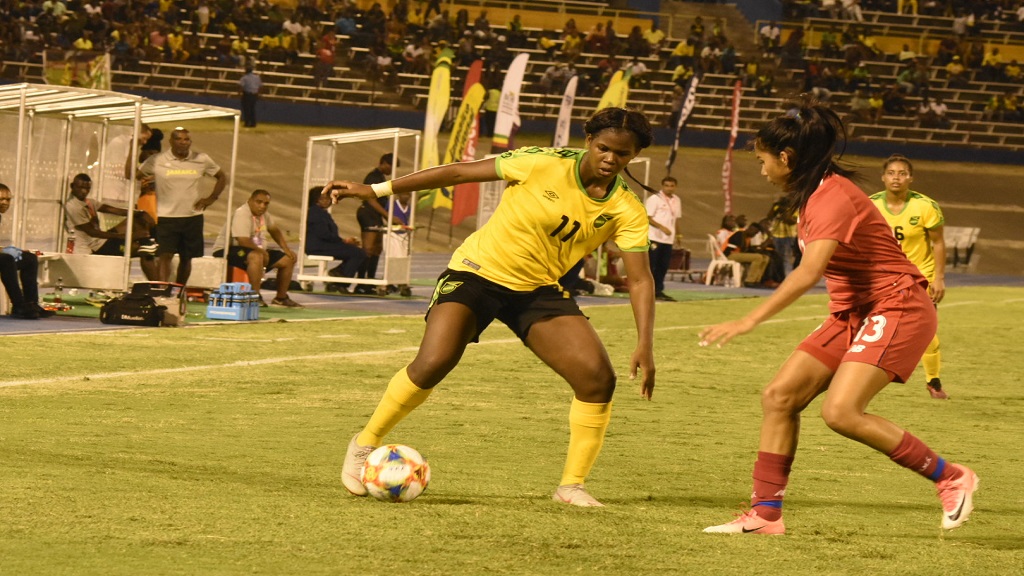 Jamaica’s Reggae Girlz defeated Panama 3-1 in their international friendly match at the National Stadium, in Kingston, on Sunday night in a match that served as a farewell for the Jamaicans before the FIFA Women’s World Cup in France from June 7 to July 7.

The victory came seven months after the Reggae Girlz defeated Panama 4-2 on penalties in their third-place playoff match at the 2018 Concacaf Women’s Championship at the Toyota Stadium in Texas on October 17, 2018, to qualify for the World Cup in France.

The qualification was historic as Jamaica became the first Caribbean team to reach the FIFA Women's World Cup.

On Sunday in front of the biggest ever crowd gathered at a sporting venue in Jamaica to watch the Reggae Girlz,  the talented Khadija Shaw scored a brace to set up the victory as players continue to fight for the 23 seats on the plane to France.

Reggae Girlz head coach, USA-based Hue Menzies has until May 24 to submit to FIFA his 23-member squad.

Shaw opened the scoring in the 28th minute when she turned on the edge of the 18-yard box and rifled a low shot past goalkeeper Yenith Bailey.

The goal was masterfully orchestrated from an Ashleigh Shim's corner, which was floated into the 18-yard box before being hastily cleared. However, the clearance fell at the feet of a Reggae Girl, who hammered the ball into the path of Trudy Carter, and the  AS Roma striker controlled on her chest, then turned, but her shot crashed into the body of Shaw on the edge of the six-yard box and the towering forward  turned and hammered past a diving Bailey.

The goal came moments after Shaw put a shot just wide of the near post after she was set up by Deneisha Blackwood following a period of dominance by the Reggae Girlz.

Shaw scored her second goal from another moment of dominance in the 49th to put the Reggae Girlz 2-0 up.

Omni-present striker Natalia Mills produced a moment of brilliance to put Panama back into the contest with a beautiful goal in the 64th minute. The 26-year-old received a beautiful ball then dismissed the last Reggae Girlz defender and fired a low shot past substitute goalkeeper Yazmeen Jameison.

Shaw then turned provider after eluding a tackle from a Panama defender to string a defence-splitting pass to captain Skakira Duncan, who calmly buried into the back of the net from just inside the 18-yard in the 78th minute to put the Reggae Girlz 3-1 up.

The Reggae Girlz will depart on Monday for a short camp in South Florida, before flying to the United Kingdom for a friendly against Scotland in Edinburgh on May 28 before travelling to France