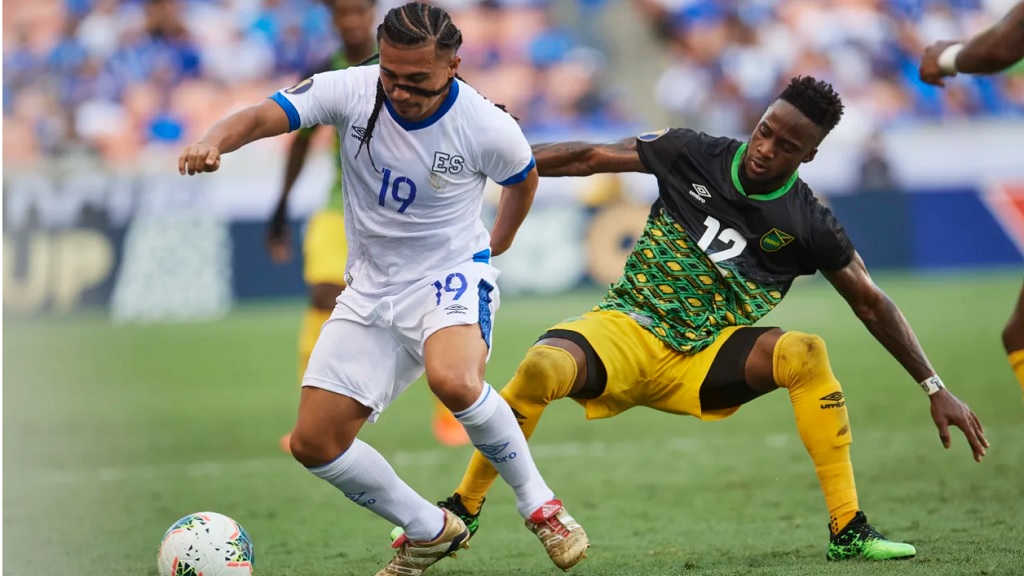 El Salvador's Gerson Mayen controls the ball against Junior Flemmings of Jamaica in a Group C game of the Concacaf Gold Cup on June 21, 2019, at the BBVA Stadium in Houston, Texas.

Jamaica and El Salvador battled to a scoreless draw in their second Group C match of the Concacaf Gold Cup on Friday night in front of a sellout crowd of 22,026 at BBVA Stadium in Houston, Texas.

The first half was a tightly contested affair with both teams combining for five total shots and three shots on target.

The Reggae Boyz held more of the ball in the first half and had over 100 completed passes than their counterparts.

The tempo immediately hit a different gear in the 46th minute but it would be Jamaica still with the better opportunities.

El Salvador defender Roberto Dominguez made a crucial clearance inside the box to cut a pass to Jamaica’s Junior Flemmings in the 51st minute.

Things got just as tense on the other end of the field as a Gerson Mayen corner led to back-to-back opportunities for El Salvador in the 62nd minute.

Darren Mattocks, the highest scorer on the active roster and the national team’s eighth top scorer all-time, entered the match in the 66th minute to debut in his third Gold Cup.

El Salvador goalkeeper Henry Hernandez was called upon for a crucial save in the 76th minute, clearing a rocket from Shaun Francis.

A Nelson Bonilla free kick opportunity in the 89th minute had the hearts of Salvadoran fans racing before Andre Blake took care of the situation.

Leon Bailey would have a free kick of his own in stoppage time but that attempt was headed away by Roberto Dominguez.

Jamaica received two more attempts but the El Salvador defense held on for the first nil-nil scoreline in a Gold Cup match since Canada vs. Honduras on July 14, 2017.

The result leaves the top of Group C up for grabs heading into the third matchday of the group stage on Tuesday with Jamaica and El Salvador locked on four points, but the Reggae Boyz are leading the table courtesy of goal difference.

In the other Group C match at the venue, Curacao picked up their first Concacaf Gold Cup win with a 1-0 result against Honduras. Curacao are in third place with three points, while Honduras are without a point.

Curacao’s first ever Gold Cup goal came from Leandro Bacuna in the 40th minute after finding Gevaro Nepomuceno’s filtered pass near the penalty marker to put the Caribbean nation in the lead.