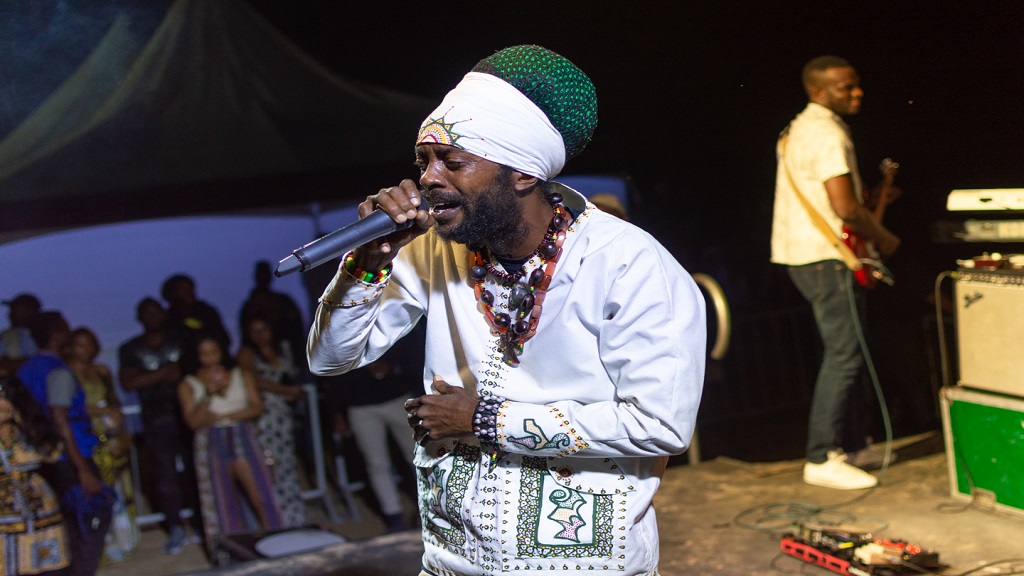 Reggae and rum lovers came out for a night of live music paired with the world’s foremost golden rum, and that is precisely what they got at Appleton Estate Signature Nights in Salem, Runaway Bay, Thursday night.

The occasion which marked the second stop in the series this year, was held at Sharkies Seafood Restaurant in St Ann. The event was hosted by media personality, Talia Soares.

While the series has seen a range of incredible reggae and dancehall acts over the years, the second staging of the 2019 installment is the first to feature culture giants in the form of Richie Spice and I-Wayne; both of whom are highly respected figures in the Rastafari and reggae communities.

A patron vibing to the music selections of Presley Hype and DJ Papi at the second staging of the Appleton Estate Signature Nights series at Sharkies Seafood Restaurant in St Ann.

“It’s a good vibration, you know. The people came out in their numbers to vibe to some Richie Spice and I-Wayne likewise, and we appreciate and love that. We give thanks for Appleton [Estate] who put this together and invited us here. It’s just a good night, a good night,” said international artiste Richie Spice, whose catalogue of hits had the crowd rocking to no end throughout his performance.

The reggae star thrilled audiences with hits like Earth A Run Red; Brown Skin; Grooving my Girl; and a crowd favorite which had Sharkies erupting in cheers and roars: The Plane Land. The people sang along to every tune. Spice’s set included renditions of classic reggae tunes such as Christ in his Kingly Character by the late Garnet Silk.

I-Wayne’s set brought the fire. The artiste electrified Sharkies Restaurant with a reel of hits, sprinkled with innovative freestyles aimed at riling up the crowd in all the right ways. The culture giant drew for classics like One Man Can’t Satisfy Her, Lava Ground, Life Seeds, and the powerful Don’t Worry.

The reggae stalwart had this to say about the evening: “It’s a great joy, this Appleton Estate vibe. We love the people’s response to the music - positive vibes as I always say. The more people say reggae is dead is the more Reggae spread. We love the vibe.”

Though his presence may be new to the Appleton Estate Signature Nights stage, his performance was natural, organic and as potent as patrons would expect it to be. The artiste’s message was well received.

“It’s myself and Richie Spice touching the stage so you know it [was always] going to be greatness, pure positivity and good music as always,” he added.

Both I-Wayne and Richie Spice received resounding encores, after which the audience began to dance and rock to the smooth selections of Presley Hype and DJ Pappi.

With two stops concluded in the Appleton Estate Signature Nights 2019 series thus far, the final show will take place at Peppa Thyme Restaurant and Bar in Kingston on Thursday, November 28.