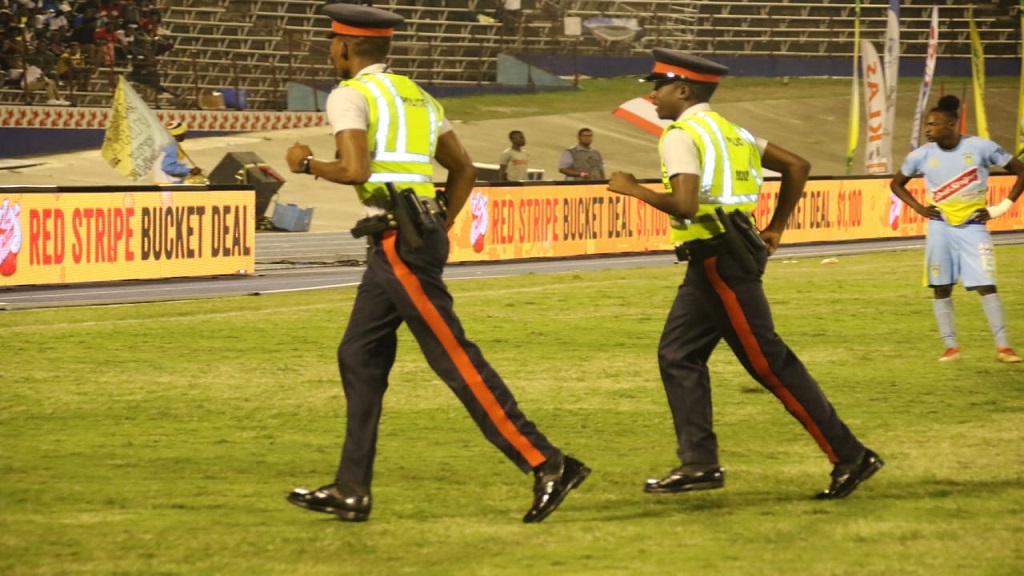 Two police officers make their way on the field following a bottle throwing incident during the RSPL final between Portmore United and Waterhouse at the National Stadium on Monday, April 29, 2019.

Waterhouse Football Club has apologized for the role played by the club in bringing Monday night’s final of the Red Stripe Premier League (RSPL) into disrepute.

Waterhouse lost the final 1-nil to defending champions Portmore United, which were beating them for the second consecutive year in Jamaica's top-tier competition inside the National Stadium.

The actions of the Waterhouse players in constantly challenging and openly disrespecting match referee Odette Hamilton by constantly getting up in her face appeared to have triggered the actions of their spectators who rained bottles onto the pitch.

This held up the game for more than 15 minutes as the police tried to bring order to the situation and ensure the safety of Hamilton and her supporting all-female cast on the sidelines.

Feeling the pressure, Waterhouse accepted its role in the debacle and showed penitence.

“We would like to publicly apologise to Red Stripe Jamaica Limited, the Professional Football Association of Jamaica, the Jamaica Football Federation, the Premier League Clubs Association, all other sponsors of the Red Stripe Premier League, our club sponsors, patrons and viewers of the finals and football lovers across Jamaica, for the role we played in an ugly final, marred by violence on and off the field,” Waterhouse said in a statement.

“Tonight (Monday), was a black eye on the sport of football in this country and we played a role in it. For that we must take responsibility and commit to ensuring this is never repeated,” said club president, Donovan White.

For his part, Chairman of the Waterhouse Football Club, Bruce Bicknell, rebuked the club’s supporters. “To the fans in the stands that threw missiles on the field of play, this has absolutely no place in our sport. You should be ashamed for the embarrassment you have caused on the sport of football and your community,” said Bicknell.

“We must become better than what happened last night. We are truly embarrassed by the events that unfolded at the stadium last evening,” the statement added.

The club also offered congratulations to Portmore United for their victory.

The beer company said it has taken note of the public apologies issued by the PCLA, the JFF, and  Waterhouse Football Club.

“The company is awaiting the outcome of promised discussions to prevent a recurrence of this incident,” Red Stripe said.

Red Stripe reiterated its commitment to supporting local football and said it would continue to stand up for good sportsmanship. The company promised to work with the PLCA and JFF in finding measures to make RSPL matches safer and create a more enjoyable atmosphere for all parties.

Red Stripe said it has clearly defined policies against any kind of anti-social behavior and actively promotes safety for all stakeholders, employees, and members of the public at sponsored events.

The JFF has said it will investigate the bottle-throwing incident.

Meanwhile, it was a rough night for Hamilton who had to work overtime to keep players from getting into physical confrontations, most times orchestrated by Waterhouse. One of those moments caused the bottle-throwing rampage from the crowd.

Towards the end of the match, the referee issued red cards to Waterhouse's Rafiek Thomas and Portmore United's Damian Williams for fighting. Thomas appeared to be the aggressor as he was seen mercilessly raining blows on Williams in full view of the referee while Waterhouse players struggled to pull him away.

As Williams left the field, a huge swelling could be seen over one of his eyes. An ice pack was immediately applied to the swelling.

These were but a synopsis of the ugly scenes that unfolded inside the National Stadium and which forced veteran football coach and commentator, Neville ‘Bertis’ Bell to comment during live commentary on television that “I have never seen anything like this.” His fellow commentators said likewise.