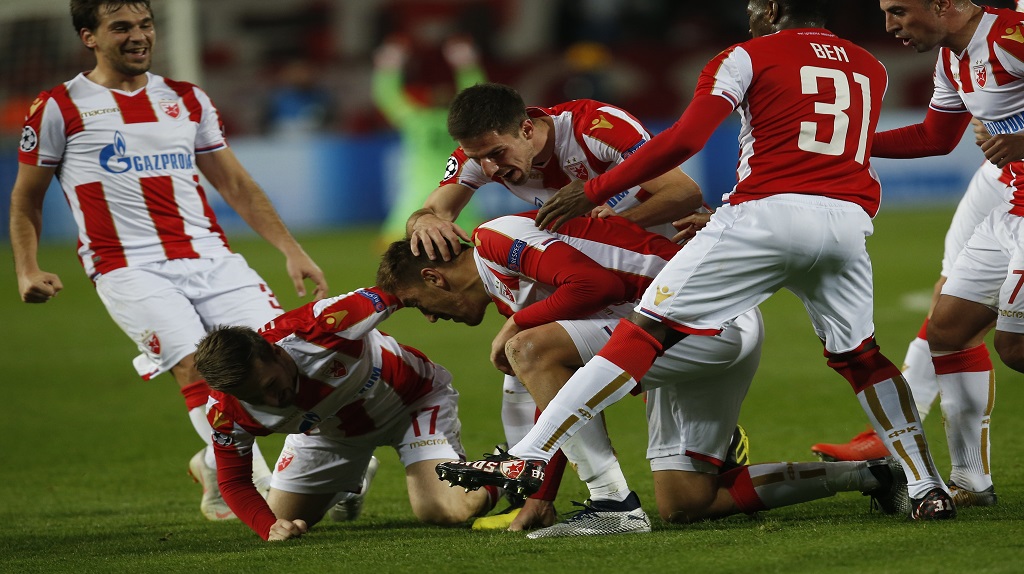 Red Star's Milan Pavkov, center, celebrates after scoring the opening goal of his team with his teammates during the Champions League group C football match against Liverpool at Rajko Mitic stadium in Belgrade, Tuesday, Nov. 6, 2018.

Liverpool went into the game hoping to open up a four-point gap at the summit before Napoli and Paris Saint-Germain faced each other later on Tuesday, but the visitors fell well short of expectations.

In the opening 45 minutes, Red Star looked a class apart from the team which lost 4-0 at Anfield two weeks ago, as Pavkov netted twice in seven minutes to leave Jurgen Klopp's side trailing by two at half-time.

The Premier League outfit's attempts to claw things back saw them hit the frame of the goal twice in the second half through Andrew Robertson and Mohamed Salah, but they were unable to make their pressure tell and Red Star held on to their first win in the group stage.

Liverpool should have had an early lead when Daniel Sturridge inexplicably smashed over from just six yards and Red Star were ruthless in their response.

Pavkov broke the deadlock 22 minutes in with a towering header from Marko Marin's corner after evading the attentions of Virgil van Dijk.

The striker soon got his second, shrugging off Georginio Wijnaldum and beating Alisson with a fierce 25-yard drive to leave Klopp looking stunned on the touchline.

Liverpool had a lucky escape at the start of the second period – the referee failing to award Red Star a penalty when a shot struck the arm of James Milner.

The Reds soon took charge, though their luck in front of goal showed no sign of improving, as a deflected Robertson delivery hit the crossbar and Salah's 72nd-minute effort clipped the outside of the upright.

Salah and Van Dijk then wasted late chances, as Red Star dug deep to open the door to Napoli or PSG in the hunt for first place.

What does it mean? Liverpool suddenly in a tricky position

Victory would have had Liverpool sitting pretty, regardless of the group's other result later in the day. However, defeat means they cannot really afford to lose either of their two final round-robin matches against PSG and Napoli, who are both impressive sides.

Pav on the back

Strong, powerful in the air and seemingly an able striker of the ball, Pavkov's repertoire was too wide-ranging for Liverpool to cope with as he inspired the win with two completely different types of goal.

Klopp opted to rest Roberto Firmino and give Sturridge a rare start, but he endured a difficult game. He failed to make amends for an awful early miss and was then hooked for the Brazilian at half-time.

- Liverpool have lost three consecutive Champions League away games for the first time in their history.
- Red Star Belgrade have won both of their European home matches against Liverpool, also winning 2-1 in October 1973 in the first leg of a Last 16 tie in the European Cup.
- Liverpool's first shot on target of this match came in the 71st minute. The Reds failed to land a shot on target in their other away game in the competition this season vs Napoli.

Liverpool are next in Champions League action away to Paris Saint-Germain on November 28 after Premier League outings against Fulham and Watford. Red Star travel to Napoli on the same day following domestic encounters with Dinamo Vranje and Radnicki Nis.