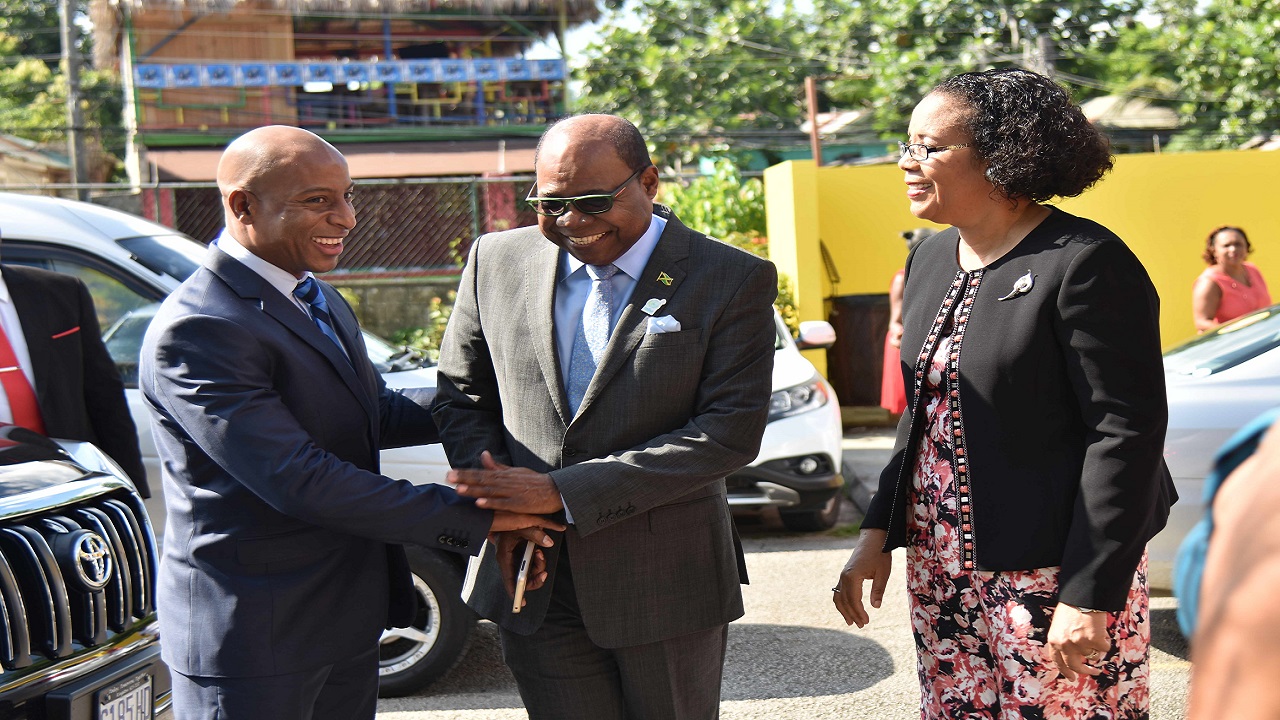 Tourism Minister Edmund Bartlett (centre) and Jamaica Hotel and Tourist Association President, Omar Robinson greet each other as Dr Angela Samuels Harris welcomes them to the St John’s Methodist Church in Montego Bay on Sunday. The occasion was a thanksgiving service to mark the start of Tourism Awareness Week 2017.

The local tourism sector began its celebration of Tourism Awareness Week (TAW) 2017 with news that Jamaica continues to experience record-breaking visitor arrivals. For the first eight months of this calendar year, January to August, there was a 6.9 per cent increase in stopover arrivals in comparison to the corresponding period for 2016.

Concurrently, cruise passenger arrivals were up 5.1 per cent to the end of August and in the eight-month period, a total of 2.8 million visitors earned the country approximately US$2 billion or 8.3 per cent more in gross foreign exchange earnings than the same period last year.

The figures were disclosed yesterday (September 24) by Minister of Tourism,  Edmund Bartlett in a message he delivered at the St John’s Methodist Church, Montego Bay, marking the start of Tourism Awareness Week. The calendar tourism event is being observed in partnership with the Jamaica Hotel and Tourist Association (JHTA) through October 1 and focusses on “Sustainable Tourism – a Tool for Development”.

Minister Bartlett said it tied in with the designation of 2017 as the “International Year of Sustainable Tourism for Development” and provided the opportunity to raise awareness of the importance of tourism and its social, cultural, political and economic value.

He underscored that as the largest source of foreign exchange earnings for most of the island economies, tourism was undoubtedly the region’s most important sector. “This reality was brought sharply into focus by the recent catastrophic destruction wrought by Hurricanes Irma and Maria on many of our tourism dependent sister islands,” said Minister Bartlett.

Speaking only days after successive hurricanes wreaked havoc in some Caribbean islands, Minister Bartlett said the ripple effects of these natural disasters were being felt throughout the tourism value chain by hoteliers and their workers, restaurateurs and the farmers who supply their produce, craft persons, transport operators and many others.

“These storms have closed hotels, cut production and wiped out jobs. Yet, tourism remains one of the most resilient economic sectors with a capacity to adapt to changing conditions and recover from setbacks.  As such Governments and stakeholders must continue to work together to minimize the effects of the negative events and build resilience and confidence in the industry,” he assured.

The tourism industry directly employs some 106,000 Jamaicans, while generating indirect jobs for one in every four persons in linked sectors, attesting to its viability. To ensure the sector is being leveraged for the socio-economic benefit of Jamaicans at all levels and to drive new growth in communities while generating much needed jobs, Minister Bartlett said he had called for “a firmer resolve to put in place initiatives to widen the net of people benefiting from the industry in terms of ownership and employment.”

In so doing, “We are creating a more inclusive industry better able to help with poverty alleviation and realize sustainable growth. Importantly, at the same time, we are strengthening the linkages between tourism and other sectors of the economy to increase the economic impact of tourism,” he noted.

Also attending the service were representatives from the Ministry of Tourism and its agencies, , including the Jamaica Tourist Board, the Tourism Enhancement Fund and the Tourism Product Development Company, as well as Mayor of Montego Bay, Councilor Homer Davis, and President of the Jamaica Hotel and Tourist Association, Omar Robinson.

Island by island look at the tourism industry after Hurricane Irma