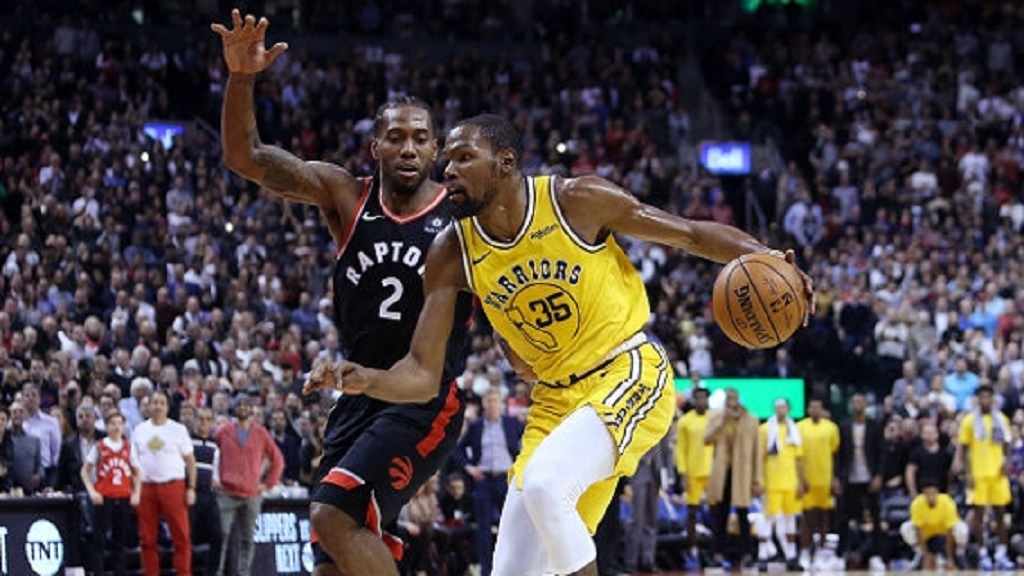 The Toronto Raptors edged the Golden State Warriors in one of the most highly anticipated clashes of the NBA season so far.

Toronto once led by as many as 18 points in the first half, but Golden State battled back to make things interesting down the stretch. Draymond Green and Stephen Curry were out of commission for the Warriors, but Kevin Durant and Kawhi Leonard brought plenty of excitement.

Durant totalled more than 40 points for the third consecutive game for the first time in his career. His clutch corner three to extend the game past regulation was not enough to secure a win, but he dropped 51 points while contributing 11 rebounds and six assists in 43 minutes. Leonard played a game-high 44 minutes, scoring 37 points with eight rebounds and three assists.

Klay Thompson made three three-pointers on his way to 23 points, three rebounds and three assists in the Warriors' loss.

Pascal Siakam scored 26 points while shooting 80 per cent from the field. He converted three of his four three-point attempts for the Raptors in a victory.

LeBron James flirted with a triple-double by posting 38 points, nine rebounds and seven assists in a 104-96 Lakers win over the Pacers.

Tobias Harris is fresh off being named the Western Conference player of the week. He scored 26 points, snagged five rebounds and dished out three assists in a 10-of-15 shooting performance. His Clippers defeated the Kings 133-121.

Lonzo Ball struggled offensively against the Pacers. Despite logging 34 minutes, he shot one of six from the field and only scored two points. He missed all three of his three-point attempts, but recorded four assists and eight rebounds.

Damian Lillard and CJ McCollum will face off against Denver's three-headed monster featuring Gary Harris, Jamal Murray and Nikola Jokic. The Nuggets are riding a three-game winning streak and sit in third in the Western Conference, but the Blazers are just two spots behind them.