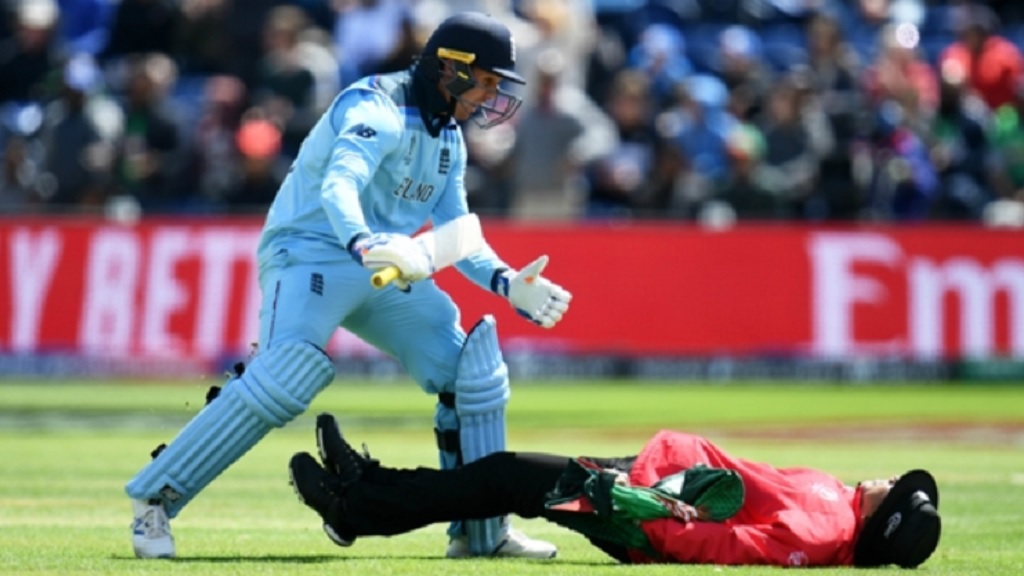 After their defeat to Pakistan last time out, there was relief in the home ranks as Roy's 153 helped England achieve their highest ever World Cup total and the heftiest score yet by any team at this year's tournament. The 106-run victory margin indicated a job well done.

But there was also concern over a hip injury sustained while batting by Jos Buttler, who did not reappear to keep wicket in Bangladesh's reply, leaving Jonny Bairstow to take over the gloves.

England piled up 386-6 and took 111 runs from the final 10 overs as Bangladesh wilted in Wales, before restricting their opponents to a reply of 280, underpinned by talisman Shakib Al Hasan's virtuoso 121.

Four years after a group-stage defeat to Bangladesh at the last World Cup in Adelaide ended their mission Down Under, England have their eyes on the trophy and in Roy they possess one of the most destructive ODI batsmen.

Umpire Joel Wilson found Roy perhaps too destructive when the Surrey batsman completed his century in the 27th over.

Not realising his pull off a short Mustafizur Rahman delivery had reached the ropes, Roy was watching the ball and jogging along when he completely wiped out the poor, unsuspecting Wilson.

Roy was eventually undone by his own greed, after flaying young off-spinner Mehidy Hasan for three successive sixes at the start of the 35th over.

He had a full house in mind when he attacked the bowler again but this time got his timing all wrong. Rather than clear the ropes, he failed to beat the field as Mashrafe Mortaza at extra cover watched the ball go skywards before falling into his hands.

Roy's innings nonetheless goes down as the second biggest by an Englishman at a World Cup - behind Andrew Strauss' 158 in the tied match against India at Bengaluru eight years ago.

England removed Bangladesh's openers cheaply, Jofra Archer and Mark Wood with the wickets, but Shakib and Mushfiqur Rahim then strung together a 106-run partnership, finally broken when the latter was caught low down by Roy at point off Liam Plunkett.

Adil Rashid had Mohammad Mithun caught by Bairstow for a second-ball duck, and Bangladesh were doomed from that point, despite Shakib's best efforts.

What does it mean?

Only that England have avoided a Bangladeshi banana skin this time. This was a match they needed to win, were heavily favoured to win, and once Roy cut loose they inevitably were destined to win. Captain Eoin Morgan had concerns for his job as skipper when his team were beaten by the same opposition in Adelaide, and his batsmen ensured there would be no repeat. But England can certainly bowl better, and they surely must find more penetration against the West Indies next time out.

England toyed with leaving Rashid out of the side, given the Cardiff pitch was expected to be one for the seamers. But the Yorkshire spinner kept his place and played his part with the wicket of Mithun. He was expensive, but the small show of faith now could reap bigger dividends deeper into the tournament.