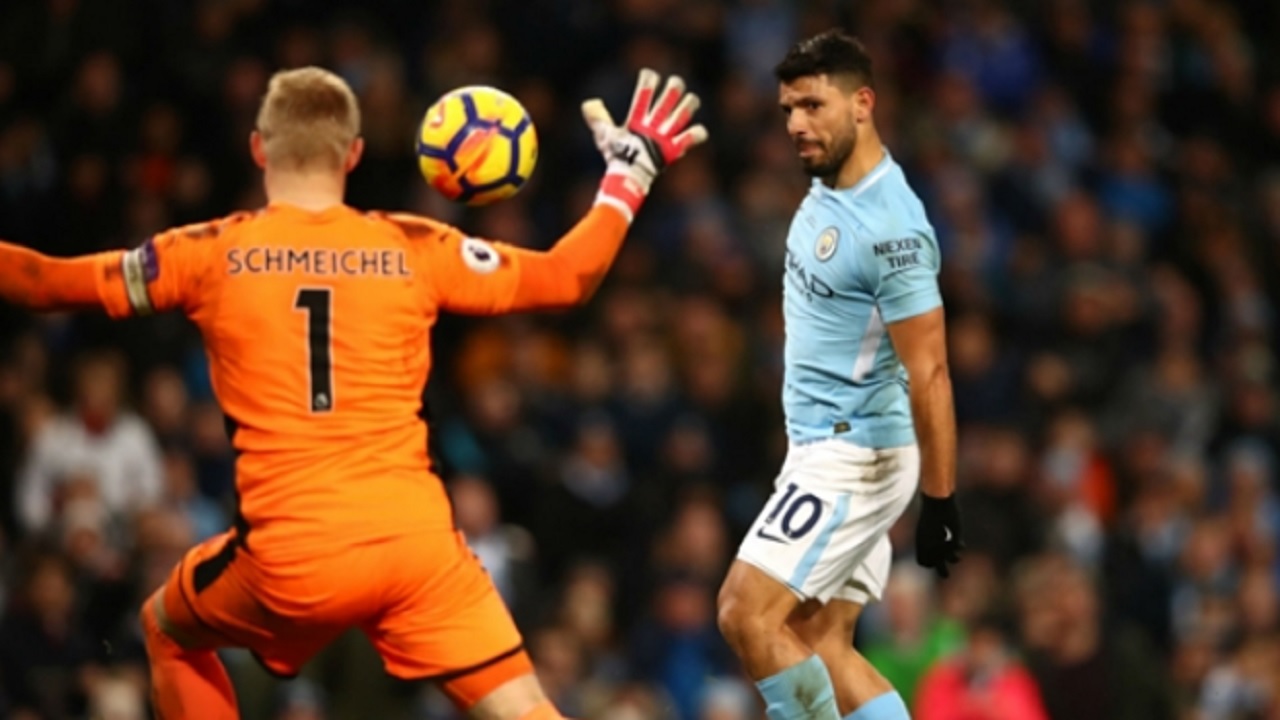 Jamaica-born Raheem Sterling scored an early goal as a three-day rest clearly did the trick for Manchester City, as they thrashed Leicester City 5-1 on Saturday to go 16 points clear at the Premier League summit.

The day, however, belonged to  Sergio Aguero, who scored four goals and benefitted  from a treble of Kevin De Bruyne assists,

Much of the build-up was dominated by Riyad Mahrez's return to Leicester's squad after missing 10 days of training in response to not securing a move to the hosts, but he was benched as City – who were afforded a few days off beforehand – ultimately cruised, with De Bruyne and Aguero stealing the show.

Although City enjoyed an electric start, going ahead in the third minute thanks to Sterling's 15th league goal of the season, they appeared to lack a little sharpness in the first half.

And a Nicolas Otamendi error 24 minutes in was punished in ruthless fashion by Jamie Vardy, reminding City there is more to Leicester than just Mahrez – who was eventually introduced in the 62nd minute.

But Pep Guardiola's men stepped things up a notch after the break, with De Bruyne setting up a quick-fire Aguero double to effectively end Leicester's chances, with the Argentinian scoring for the seventh successive game at the Etihad across all competitions.

Leicester caused some problems towards the end, but Aguero added to an emphatic second-half performance by capitalising on a Kasper Schmeichel error before thumping in an injury-time fifth, as City bounced back from their disappointing draw with Burnley in style.

It did not take the home side long to establish an advantage, Sterling tapping in from close range following an exquisite De Bruyne cross between Schmeichel and his defenders.

The early goal was not a sign of things to come, however, as City's performance became a little flat and Leicester equalised in the 24th minute.

Otamendi's poor pass inside was intercepted by Vardy and the striker rode two challenges, before running at Aymeric Laporte and firing into the bottom-left corner from the edge of the box.

Sterling looked destined to restore City's lead just before the break, only for Aleksandar Dragovic to produce a vital block after the England international had skipped past Schmeichel.

City did find themselves ahead once again in the 48th minute, however, as Aguero collected De Bruyne's teasing low cross from the left and tapped in from a couple of yards out.

And the home side effectively wrapped things up soon after.

De Bruyne was the inspiration yet again, playing an intricate pass into the area and Aguero fired past Schmeichel, despite the goalkeeper getting a hand to it.

Claude Puel introduced Mahrez from the bench to a chorus of ironic cheers just after the hour mark, giving him his first appearance since January 20.

But the Algerian's introduction was far too late to influence the outcome, as Aguero rounded off a sensational second-half performance in the final 13 minutes.

His third goal came via a Schmeichel gift, after the Denmark international had passed the ball straight to him and the Argentinian delightfully chipped into the net.

And he took his season tally to 21 late on, smashing in off the crossbar from 25 yards.