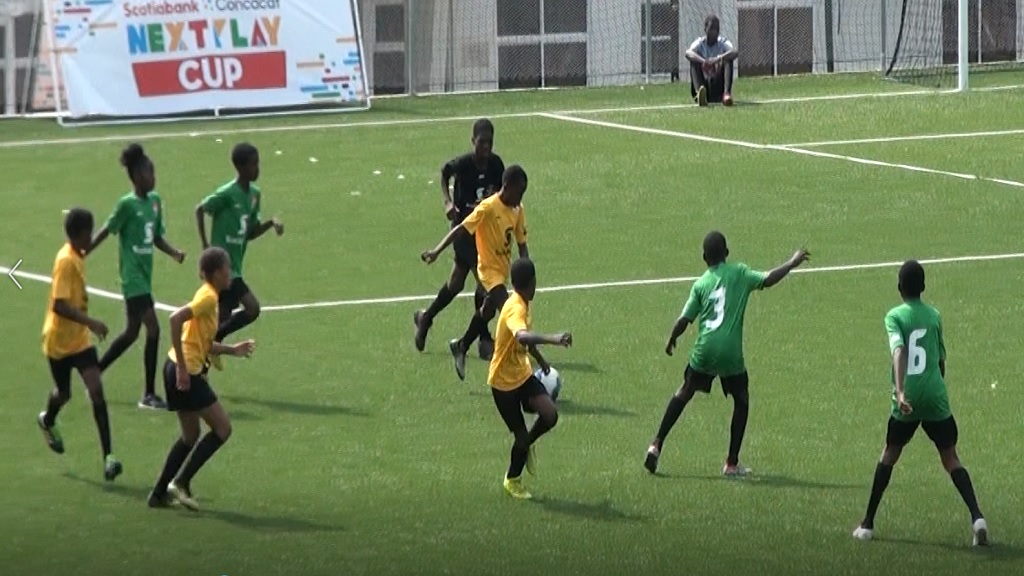 Action from a Scotiabank Concacaf NextPlay Cup game at the University of the West Indies field on Saturday, November 30, 2019.

Reigning champions Holy Family Primary are among the eight quarter-finalists from the Jamaican leg of the 2019 Scotiabank Concacaf NextPlay Cup.

The quarter-finalists were decided following week two of the competition last Saturday.

Each zone (eastern and western) are divided into four groups of four teams. The eight group winners qualified for the quarter-finals, which are scheduled Saturday, December 7, the third and final week of competition. The semi-final matches and the final will also take place on the day.

Holy Family Primary had to dig deep to get out of Group One of the eastern section and in the end only a point separated the top three teams. The defending champions finished on 13 points from their seven games over the two weeks to win the group and snatched the quarter-final spot. Rollington Town Primary (12 points) and Waterford Primary (12 points) finished second and third.

McCauley Primary led all the qualifiers with 17 points from their seven games over the two weekends. The 17 points comprises five victories and two draws as they finished atop of Group Four in the east, three clear of  second-place York Town Primary.

For Scotiabank, football is a passion that is shared with its customers, employees and communities. The Bank supports football at all levels in Latin America and the Caribbean, because of the values it teaches and its ability to transform individuals and build stronger, more vibrant communities.

“Scotiabank is proud to partner with Concacaf to execute this program for the second year in a row,” said Yanique Forbes-Patrick, Director of Public Affairs and Communications, Scotiabank (English Caribbean).

“We believe that through sports initiatives such as the Scotiabank Concacaf NextPlay Academy and Cup, we provide development opportunities for our future generations in the communities where we operate, demonstrating Scotiabank’s commitment to helping young people have a better future. Scotiabank also continues to support youth development through the Scotiabank Football Club Program, a global platform that promotes the values of leadership, respect, integrity, teamwork, discipline and responsibility. Since 2014, more than 450,000 young people have benefitted from the Scotiabank Football Club Program in the Caribbean and Latin America”, she added.

As part of Scotiabank’s support for communities, the bank will invest more than USD$65,000 across the region to carry out a legacy program where winning schools from all four countries will be able to enhance the sports facilities of their choice. With this, Scotiabank seeks to have a meaningful impact on its communities and promote spaces where children and youth can come together, reinforce life skills and values, and work for a better future.