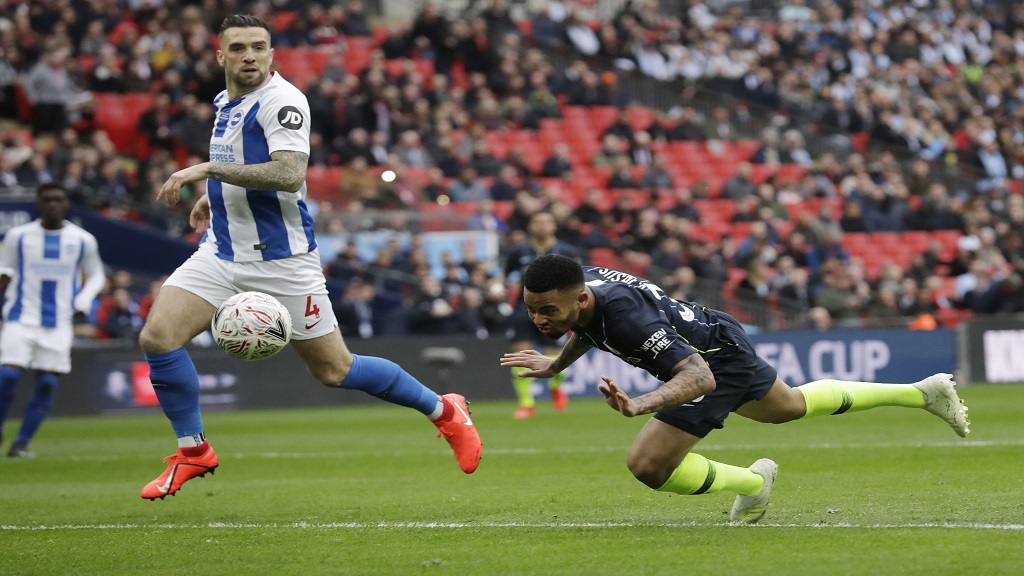 Thousands of the seat allocation went unsold at Wembley Stadium as City reached the FA Cup final by beating Brighton 1-0 to move a step closer to collecting an unprecedented haul of trophies by an English club.

Outnumbered by Brighton fans, City had to dig deep to protect the victory after Gabriel Jesus met Kevin De Bruyne's cross with a diving header to score in the fourth minute in front of a 71,521 crowd.

Brighton, which are still fighting for top-flight survival, caused problems for a City side challenging for the Premier League they won with a 100-point haul last season.

"The year after you have the tendency to be a bit more arrogant, more presumptuous ... and we are still there," City manager Pep Guardiola said. "That is why it is incredible what these players have done so far."

So far only one trophy has been collected, the League Cup in February by beating Chelsea on a previous trip to 90,000-capacity Wembley.

City's quest for a first Champions League title resumes on Tuesday when Guardiola hopes striker Sergio Aguero will be fit to play at Tottenham in an all-English quarterfinal after missing the FA Cup semifinal.

By the time the five-time FA Cup winners contest the May 18 final against Wolverhampton or Watford, Guardiola will be hoping to have defended the Premier League title when the campaign ends the previous weekend.

Liverpool are back on top for now after beating Southampton on Friday night but City have a game in hand to wipe out that two-point lead.

No English team has ever swept the Premier League, FA Cup, and League Cup, let alone win European soccer's top prize at the same time. Guardiola did win the Champions League and Spanish league and cup in 2009 at the end of his first season in charge of Barcelona.

"It's almost impossible to win the quadruple — surviving is a miracle," Guardiola said. "We are losing players every game with tiredness or injuries but still we will try to do it. It's incredible what these players have done so far, and we are going to try and win every game until the end."

City needed some good refereeing fortune against Brighton to finish with 11 men.

Kyle Walker pushed his head toward Brighton forward Alireza Jahanbakhsh in the 32nd minute but he was only given a yellow card after surviving a video review. Jahanbakhsh appeared to initially tread on Walker but Brighton manager Chris Hughton felt the City defender should have been dismissed.

"There would have been numerous circumstances where that exact same action would have got someone a red card," Hughton said. "There was sufficient force in the action to warrant that ... and I'm even more disappointed this was a VAR."

Walker came off early in the second half with back and hamstring problems.

Brighton's priority will now be staying in the Premier League, with seven games to play and only five points separating the south-coast team from the drop zone.

Luka Milivojevic sent Crystal Palace to the brink of safety by securing a 1-0 victory at Newcastle from a penalty in the 81st after DeAndre Yedlin's clumsy challenge on Wilfried Zaha. While Palace moved 11 points clear of danger with five games remaining, Newcastle is seven points above the relegation zone.

Burnley is a point better off than Newcastle after winning 3-1 at Bournemouth. After Ashley Barnes scored an own-goal, Chris Wood and Ashley Westwood turned the game around by halftime. Barnes netted the third.