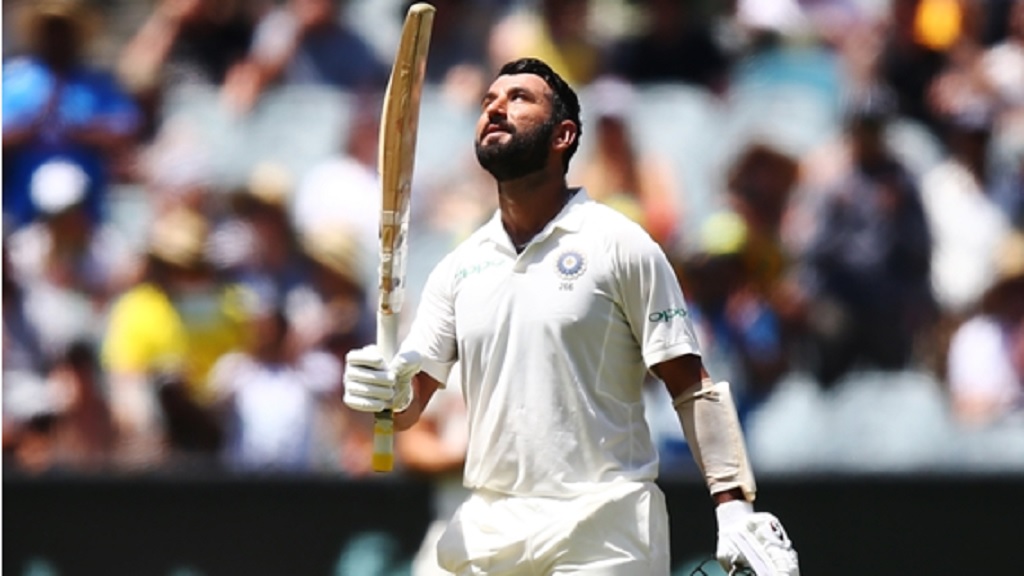 Cheteshwar Pujara posted another century as India continued to grind down Australia in the third Test in Melbourne on Thursday.

Pujara (106) brought up his 17th Test hundred on another good day for batting at the MCG as Australia battled in hot weather.

Virat Kohli (82) and Rohit Sharma (63 not out) made half-centuries as India reached 443-7 before declaring late on day two on a flat pitch that was heavily criticised on Wednesday.

Marcus Harris and Aaron Finch got to stumps safely, albeit unconvincingly, as Australia finished the day 8-0.

India had resumed at 215-2 as Pujara and Kohli pushed them further ahead while Australia's bowlers toiled.

Australia were somewhat unfortunate as multiple edges went either side of fielders, before Pujara brought up three figures for the second time in the series with a beautiful drive off Nathan Lyon (1-110).

Kohli adopted a more aggressive approach after lunch, although it would be his undoing as he attacked an over of short-pitched bowling from Mitchell Starc (2-87).

The India captain, who needed treatment on a suspected back problem, picked out Finch at third man to end his 170-run partnership with Pujara.

Pujara quickly followed as a delivery from Pat Cummins (3-72) stayed low during a period in which the MCG pitch showed signs of variable bounce coming into play.

Rohit and Ajinkya Rahane were starting to frustrate Australia once more, and Lyon saw two good chances go begging, including substitute fielder Peter Siddle dropping a sitter off the former.

But the off-spinner also saw a ball stay low to trap Rahane lbw for 34 before India started to up the tempo - Rishabh Pant (39) and Ravindra Jadeja (4) joining Rohit in chasing quick runs until Kohli decided to declare.

India caused some problems and Harris was hit in the helmet, but the tourists were unable to find a breakthrough in the six overs before stumps.