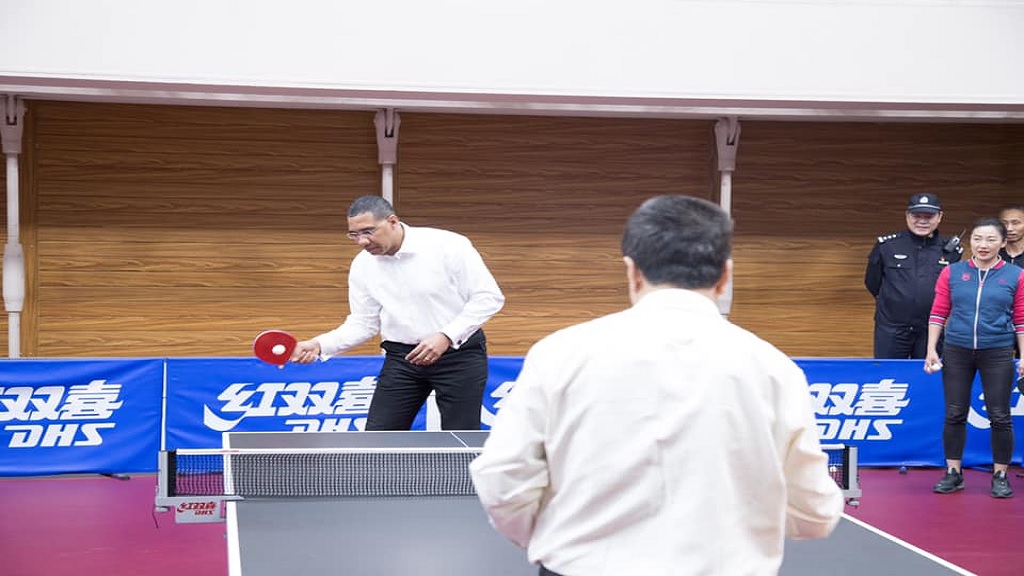 We were delighted to see the Most Honourable Andrew Holness, Prime Minister of Jamaica display his table tennis skills in Shanghai on November 5 during his official visit to China. We noted that a visit to the International Table Tennis Federation (ITTF) Museum of Shanghai was included in this carefully-planned agenda and can’t help but allow ourselves to be positively expectant about what this appears to signal.

When young Andrew Holness learned and played table tennis recreationally while in school, he might not have foreseen how those skills would have given him diplomatic leverage with the hosts and people of one of the world’s most powerful countries. Imagine what it could mean if every child in Jamaica received that same solid exposure to the game.

Indeed the Table Tennis organizing body has been working steadily for over 70 years to give as many children as possible an opportunity to learn the sport. At present, there is a table tennis programme in approximately 130 schools across the country and 105 registered clubs. We have developed a core of players who are able to represent Jamaica in tournaments and have increased the number of tournament exposure for young people. Our national players have participated in Caribbean, Latin American and World Championship tournaments.

Olivia  Petrekin and Lianna Campbell are ranked third in Under 13 Girls’ doubles;  Azizi Johnson and Tsenaye Lewis are the third ranked Under 13 mixed doubles in the Caribbean; and Nickoy Smith and Gari Whyte hold the boys Under 11 third place ranking.

Previously, Lianna Campbell and Kelsey Davidson led the Caribbean as the top ranked Under 11 players, while Solesha Young, an exceptionally talented player, can be counted on to take Jamaica through the toughest matches. At the senior level, four-time National Champion, 28 year-old Simon Tomlinson, learnt the game at Vaz Preparatory at the age of eight and has gone on to represent Jamaica in tournaments held in more than 20 countries.

He has medalled for Jamaica at the Caribbean, North American and World Championship levels. We are very proud of our players and grateful to the coaches who, because of their love of the sport and commitment to the development of young people, have laboured to get us to this point.

It is simply amazing what we have achieved without adequate equipment, venues and the support of nutritionists, physiotherapists, sports psychologists, management teams, and more certified coaches. There are no venues devoted to table tennis in all of Jamaica. The sport is taught and played with passion by coaches and young people who hungrily make use of any available space they can access.

The Association especially thanks the Jamaica Theological Seminary and the Excelsior High School for making their halls available for training and tournaments. But these conditions are not ideal and training is sometimes disrupted, both at these venues and at the other borrowed spots across the country to make way for other obligations.

Most Honourable Prime Minister, if we may submit, a tremendous boon to the development of our youth would be for the creation of suitable table tennis venues in every parish.  Ideally, this space would hold six boards, with the right flooring, storage areas for equipment and include the provision of quality racquets, balls and tables.

China leads the world in table tennis; their best players would also agree that there are noble contenders from Sweden, Germany, Mexico and Japan. These countries are represented here in Jamaica and we respectfully suggest that a low hanging fruit with high exponential benefit would be to engage these nations for assistance with training and the building out of the infrastructure to support the sustainable growth of the game.

We thank the Government of Japan for affording us the expertise of Coach Satoshi Takashima from 2016 – 2018 and encourage more contributions of this kind.

Building our capacity to provide top quality training in table tennis is in keeping with the goals of the Sports Sector Plan for Jamaica’s National Vision 2030 Development Plan which states: “Jamaica will strengthen the role of sport in national development by: broadening opportunities for participation in recreational and competitive sports for persons of all age groups; increasing facilities for sporting events at the national, community and school levels; increasing the number of trained coaches, administrators, and other personnel.”

We are an organised and motivated body with an outstanding group of volunteers who stand ready to support any investment in the development of young people through this sport. And by the way, the Prime Minister did very well in holding his own during that diplomatic bounce on the table tennis board.

Godfrey Lothian is the president of the Jamaica Table Tennis Association.