Skip to main content
Breaking News |
Lyon president writes letter to Gov't calling for season to resume
Minister emphasises importance of access to internet by every citizen
Lautaro Martinez will have to earn his place at Barcelona – Scaloni
Saliva ban could lead to boring cricket, warns Starc
Jamaicans urged to follow protocols as they return to work on June 1
Rumour Has It: City eye Leon Bailey as Sane nears Bayern
Four more confirmed COVID-19 cases; 27 patients recover
Pastor found dead with chop wounds in St Elizabeth
Higgler killed in home invasion in Westmoreland
HR for Business: What happens next? 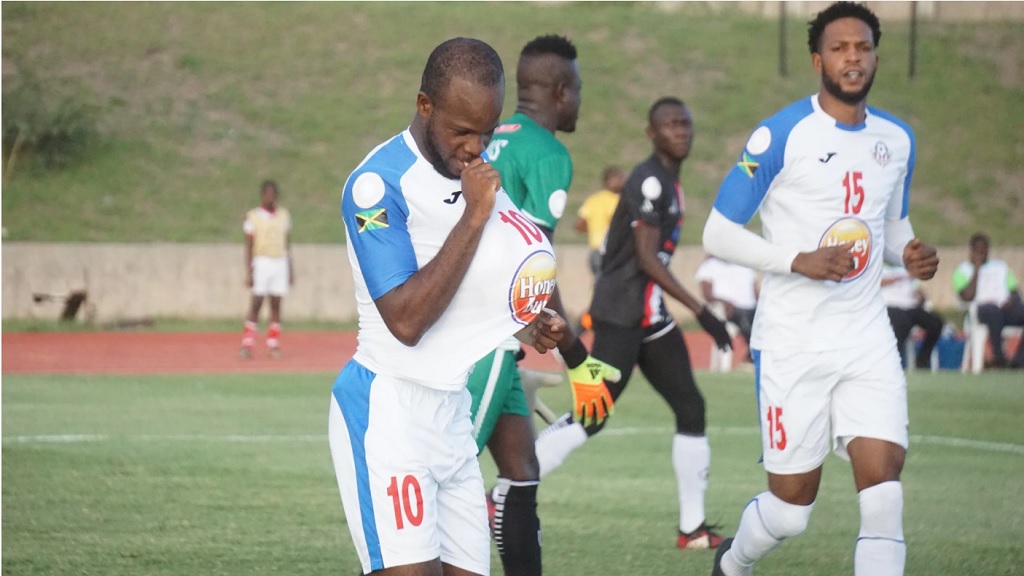 Javon East of Portmore United celebrates after scoring against Haiti's AS Capoise on the second day of the Concacaf Caribbean Flow Championship at the East Stadium on Tuesday, May 14, 2019.

A spot in the 2020 Scotiabank Concacaf Champions League is in sight for Portmore United of Jamaica after downing AS Capoise of Haiti 1-0 on Matchday Two of the 2019 Flow Concacaf Caribbean Club Championship on Tuesday night at the Stadium East in Kingston.

The win keeps Portmore atop the 2019 Flow Concacaf Caribbean Club Championship table with six points, two points ahead of second-place Waterhouse of Jamaica.

The two Jamaican sides will meet on Thursday in the finale, with Portmore United only requiring a draw to clinch a 2020 Scotiabank Concacaf Champions League bid.

It was a tight, intense affair with scoring chances at a premium. Portmore United looked set to take the lead in the 70th minute when a penalty was whistled in their favour, but Capoise goalkeeper Yves Clervin denied Javon East from the spot to keep it scoreless.

Yet three minutes later in the 73rd minute Clervin was unable to prevent East from scoring after receiving a cross from the right from Lamar Walker for a 1-0 lead that held up until the final whistle.

In the first game at the venue, a pair of first-half goals helped push Waterhouse past Real Hope 2-0.

Keithy Simpson scored his second goal of the championship to hand Waterhouse a 1-0 lead in the 19h minute, which was then followed by a Stephen Williams goal in the 36th minute that doubled the home side’s lead.

From there, the Waterhouse defense took over and helped goalkeeper Akeem Chambers record a clean sheet victory.

The fourth-place finisher will face S.V. Robinhood (SUR), winner of the 2019 Caribbean Club Shield, in a playoff match to determine the third club that will represent the Caribbean in the 2019 Scotiabank Concacaf League.

Javon East: My goal is to help Portmore to Concacaf Champions League

Minister emphasises importance of access to internet by every citizen

Lautaro Martinez will have to earn his place at Barcelona – Scaloni